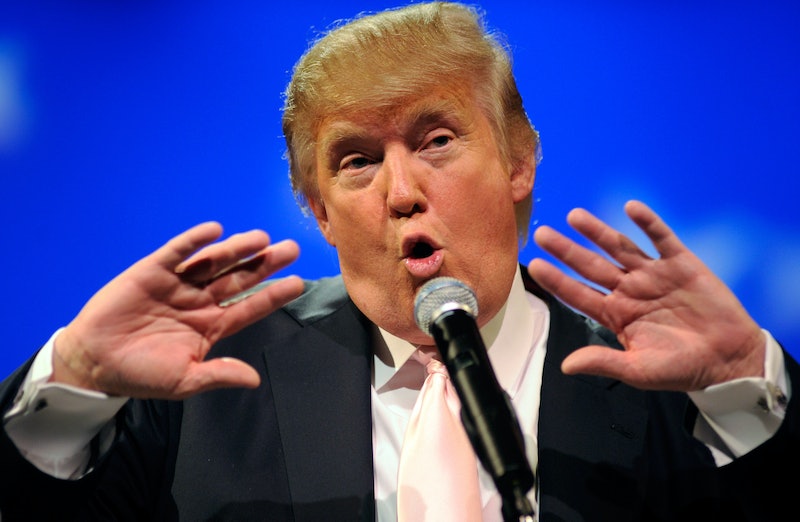 The Donald is back. Donald Trump announced Tuesday he's running for president, and on came the groans and moans. Trump is known for his unapologetic diarrhea mouth that gets him in headline-making Twitter feuds with just about anyone who'll engage him. So just imagine what it'll be like if he is allowed to participate in the GOP presidential debates, which are set to begin in a few months. Well, we've done just that, and these one-liners Donald Trump could say at the Republican debates pretty much capture what we could expect if he gets a TV platform — that is, an unscripted one.

While this is fun and all, Trump might not even get a chance to join the GOP debates. The field is super crowded, and there have been talks of blocking out less serious contenders to make the event more reasonable. The first debate hosted by Fox News is capping its participants to 10. How do you moderate a stage of more than a dozen candidates, all of whom are trying to slide in as many underhanded jabs at the competition while convincing the American public they're the right person to lead? No doubt, the GOP debates will be fun TV, and Trump could bring some solid zingers into the mix.

This is Trump's famous catchphrase from his mogul-making reality show The Apprentice. Using it will elicit eye rolls, but not using it would be dumb.

This seems to be Trump's favorite insult. He called Obama a loser. Cher. Rosie O'Donnell. Mark Cuban. Russell Brand. The Huffington Post. Journalists. People without egos. The real question is whether he's willing to put himself on his own "Trump's loser list" when he, well, loses the primaries. Triumphant Trump he will not be.

"Where Were You Born?"

During the whole Obama birtherism campaign, Trump was one of the most obnoxiously vocal thorns trying to get POTUS to share his birth certificate to prove he was a U.S.-born citizen. Trump could hurl the birther accusation Ted Cruz's way, since the Texas senator was born in Canada to a Canadian father and an American mother. There's still some uncertainty as to whether Cruz is a "natural-born citizen," which the Constitution writes is required for someone to be president.

Or any iteration that has Trump flaunting his wealth. Even in his nearly hour-long candidacy announcement, Trump couldn't help but money-shame the rest of us by saying he won't need our donations to get him in the White House. He'll be using his own money. Campaigns cost hundreds of millions of dollars.

"My Hair Is More Famous Than You."

Trump's trademark hair is (in)famous, with even dogs rocking the wispy comb-over. Over the years, his coiffure has been pretty consistent, unlike some of his competition's stance on issues. So in this case, Trump might have a legitimate claim. After all, many Americans probably won't know Carly Fiorina's HP history or who Ben Carson even is.

Trump is hardly a serious contender, but his high-profile public and celebrity pull could be enough to get him a podium at the edge of the stage. Will he raise his hand to speak? Maybe he'll bring his own light guys so he's not withering in the shaded wings. I just can't wait for the day we can all swing out our cobra arms and tell Trump, "You're fired... now get off the stage."