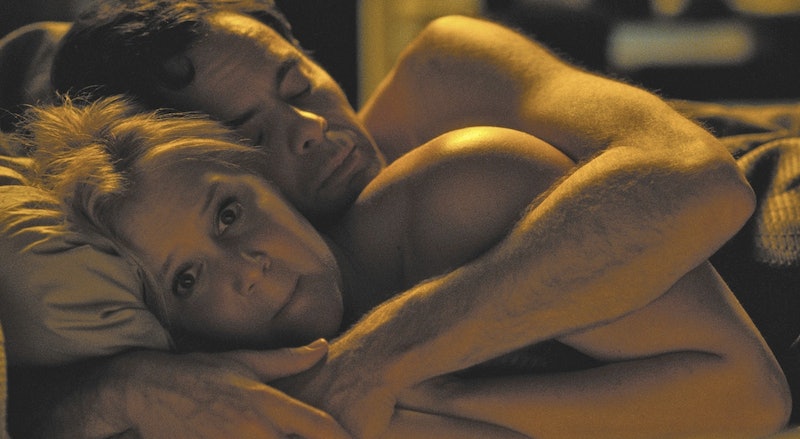 Guys, it’s time. Well, almost time. Amy Schumer posted a picture on Twitter to remind us all that Trainwreck comes out in ONE MONTH. When I heard the news I got a little panicked and started pacing in circles around my living room. I mean, THAT’S SO SOON. But also, NOT SOON ENOUGH. And, WHAT AM I GOING TO DO IN THE MEANTIME? Because I’m going to need something to keep myself occupied from all of the giddiness coursing through me at the thought of sitting in the theater one month from today, watching Amy Schumer’s first feature-length movie. I don’t even think I’ll be able to eat popcorn, I’ll be so excited. And I really love popcorn. Like, popcorn is 92 percent of the reason I go to the movies in the first place, just to put that comment into context.

Anyway, waiting a month for this movie to come out feels a lot like the day after Thanksgiving, when the Christmas tree goes up and the lights come on and you can feel that holiday spirit rising in you and then you realize there is still A MONTH TO GO before the damn event. It’s TORTURE. But then your mom pulls out the advent calendar and you start to feel a little better, because at least you can eat chocolate while you wait. This is totally the adult equivalent of that, because the day that Trainwreck comes out will be the best day of the year. I can promise you that. So, to ease the torture of waiting, I put together a little list of things to do in the meantime. An Amy Schumer advent calendar, if you will.

How cool is this: instead of doing a normal publicity tour for the movie, Schumer and a number of her cast mates are on tour, performing in front of live audiences around the country (and Canada, too!). Check out The Trainwreck Comedy Tour. Other performers include Judd Apatow and Colin Quinn.

2. Marathon The Last Three Seasons Of Inside Amy Schumer

3. Make A List Of All The Ways That Your Parents Messed You Up For Relationships Forever

This is definitely a big theme in the movie, this will prepare you for all of the reflective moments and personal epiphanies Schumer’s character will undoubtedly have. Maybe it will help you to have some of your own too?

4. Go On As Many Internet Dates As You Can

So that, when her character in the movie has those awful first dates, you can raise your popcorn to the screen in solidarity, and yell, “PREACH,” because first dates are the worst.

5. Watch Downton Abbey & Imagine Lebron James Watching It With You

WHO DO YOU THINK HIS FAVORITE SISTER IS? Lady Mary, I’m sure.

6. Watch Her Glamour Awards Speech Over & Over Again

Because not even her best stand up act gets better than this drunken moment of brilliance and honesty.

What? It makes time go faster when you don’t remember it passing. Plus, I’m pretty sure Schumer's character would approve.

There you have it. A surefire way to make it through the next month unscathed. Tackle two or three of these a week and you’ll not only keep yourself occupied, but you’ll also get yourself pumped for opening day.