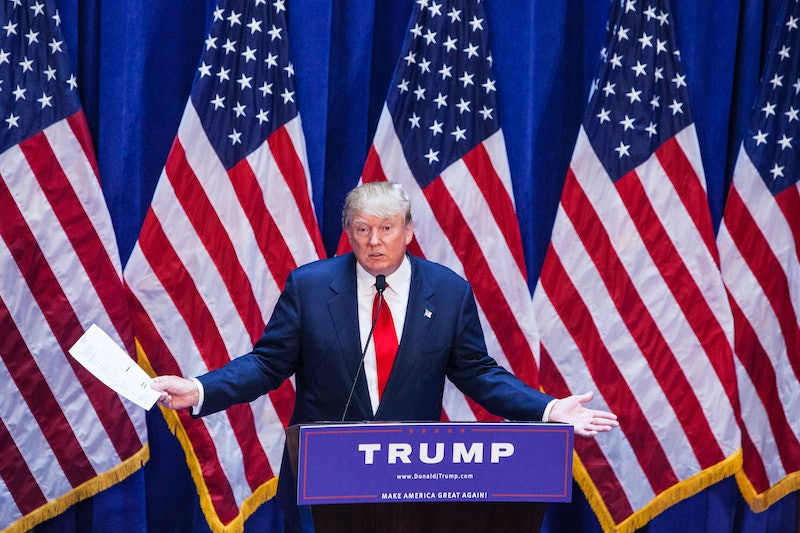 Donald Trump officially launched his presidential campaign on Tuesday, eliciting the type of reactions you'd expect when it comes to a candidate who's better known as a prominent real estate mogul and reality show host than a politician. Though certainly not the most experienced candidate the GOP has to offer, there is one strong stat going for the Apprentice star: Donald Trump rivals Hillary Clinton on social media. According to numbers released by Facebook, Trump's social media engagement on his big announcement day was second only to Clinton. As many as 3.6 million people had something to say about Trump's presidential run within the first 24 hours of his announcement.

Trump had a staggering 6.4 million user interactions on the social media platform. Be it a simple comment, like, or the sharing of a gif of Trump going up a lofty escalator at the eponymous Trump Tower, a whole lot of people had the Donald on their minds. However, Clinton's numbers on the day of her campaign announcement are substantially higher. The Democratic frontrunner garnered 10.1 million interactions from 4.7 million people. Former Texas Senator and GOP presidential hopeful Ted Cruz, who was the first to announce, rounded out the top three in terms of Facebook engagements, generating 5.5 million interactions from 2.1 million people.

You'd think that such high social media numbers would mean Trump has equally high chances of nabbing the GOP nomination, right? Not necessarily. What Facebook doesn't say about those engagement numbers is whether the interactions are positive or negative. Based on additional popularity information from the likes of FiveThirtyEight and Bloomberg Politics, it's safe to say a majority of what was shared on Facebook the day Trump announced his candidacy wasn't all that kind.

According to data from FiveThirtyEight cross-checking name recognition with favorability of GOP candidates dating as far back as 1980, a whole lot of people know the Donald — well over 75 percent of GOP voters — but not a whole lot are in favor of him. Fifty seven percent of Republicans see Trump in an unfavorable light, putting him as the least liked of all potential candidates in the last 35 years. A Bloomberg Politics study reaffirms those dismal numbers. According to a survey of 655 Republicans, just 9 percent would "seriously consider" voting for the Donald. Conversely, 62 percent would never vote for Trump, while only 3 percent were unsure.

Numbers released by Public Policy Polling the same day as Trump's announcement puts Clinton as the primary frontrunner with 65 percent favorability, while Cruz was polling at 8 percent. The Donald is considered an "underwater" candidate, meaning he's seen far more negatively than positively. Social media continues to be Trump's silver lining, however. He has a strong presence on Twitter with 3 million followers. Clinton still has him beat in that arena, though, too, with 3.68 million followers.