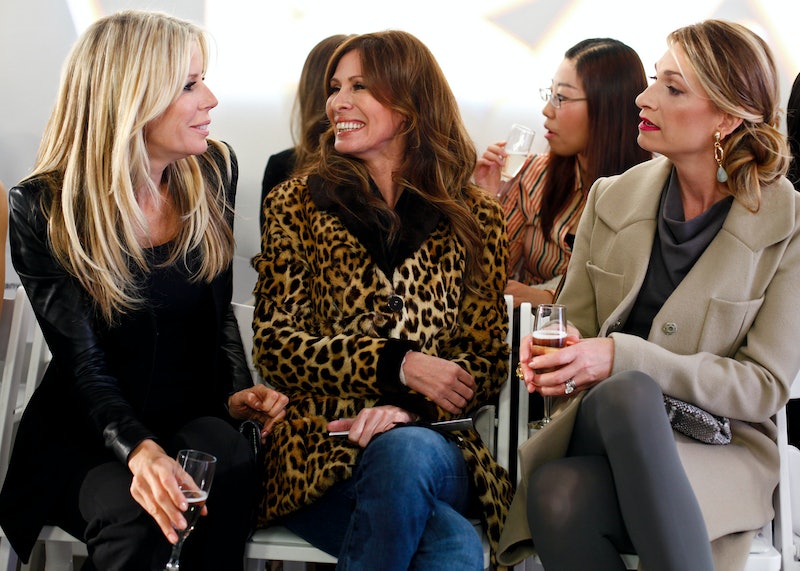 Can we talk for a minute about Real Housewives of New York's Carole Radziwell, and the fact that she admitted to Bethenny that she had a sex dream about her? Because, seriously: As a diehard RHONY fan, I can attest that scene may have been the best moment of the entire season. In case you missed it, on Tuesday night’s episode of Real Housewives of New York , Carole met Bethenny Frankel for dinner, and confessed that she had recently had a sex dream about her. And while they did not “go downtown Julie Brown,” to quote Bethenny, Carole admitted that there was definitely touching where her "bathing suit would be." The coyness! The absolute honesty! I just can’t get enough.

But I’m a pretty big fan of RHONY's Carole, and for more than just her cool factor. She’s one of the most honest and level-headed of the housewives — and, after Tuesday’s episode especially, she is the also clearly the closest thing to normal the Housewives franchise has ever seen. I mean, creepy weird sex dreams starring people you know? WHO DOESN’T HAVE THOSE? Before I say too much, though — I don’t want this paragraph to turn into a moment from Carly Simon’s “You’re So Vain” and have all of my friends thinking this sex dream is about them — I'll just leave it at this: that moment with Carol made me love her even more, and since then, I've been unable to ignore just how relatable she can be..

In this season alone, there have been so many moments where Carole was not only totally relatable, but handled herself like an actual normal person would. IMAGINE!

Here are some of my other favorite Carol moments from this season where she seemed more like one of the gals than some glamorous reality television star:

1. When She Took Bethenny’s Blender

Carole claims she took it because it was the most expensive item in the house — but also because Bethenny offered. I’ve totally been in that situation before where a host offers you something of theirs that you love, and you’re like, “What is this? A trick?” but then you take it anyway and wonder forever if that was maybe tacky. (Is it?) GLAD TO KNOW I’M NOT ALONE IN THIS.

3. She Knows About Her Boyfriend’s Ex, And Isn’t All Dramatic About It

When LuAnn de Lesseps brings up her niece, Carole’s boyfriend’s ex, over drinks after the boxing match, Carole shrugs it off and says she knows all about her. Gotta love a housewife who doesn’t melt down every time someone mentions her S.O.’s past.

When Bethenny starts badmouthing Carole’s best friend over dinner, Carole totally sticks up for Heather in a way that’s still respectful of Bethenny’s feelings. Instead of going ham, Carole explains who Heather is, and why Bethenny maybe isn’t responding well to that. You know, like a normal person would.

5. She’s Adorable When She Flirts

That scene with LuAnn’s chef? No wonder he falls for her. Plus, I couldn’t help but root for her — even if the age difference is considerable.

6. She’s Honest With Her Friends

She doesn’t keep the fact that she’s dating LuAnn's chef, Adam, a secret from LuAnn. Over beers, she confesses that they’re together, and keeps her cool when LuAnn doesn't respond well. Way to not stir the pot by mentioning all the young dudes LuAnn has dated, Carole!

Naming different shades of pink in Kristin’s nail polish line, Pop of Color, a ton of nicknames for genitalia? HILARIOUS — and totally something you and your friends would suggest over a bottle of wine.

See? Isn’t she totally relatable? Now, let’s all go have sex dreams about her like normal people.

More like this
Twitter Is Still In Hysterics Over 'Love Island's Chaotic Heart Rate Challenge
By Frances Stewart
Twitter Can’t Move Past *That* Secret Kiss On 'Love Island'
By Frances Stewart
Bachelor Nation's Blake Horstmann Is Dating 'Love Is Blind' Star Giannina Gibelli
By Jake Viswanath and Radhika Menon
The 'Love Island' Contestants *Do* Know Who Gemma's Dad Is, After All
By Bustle UK
Get Even More From Bustle — Sign Up For The Newsletter