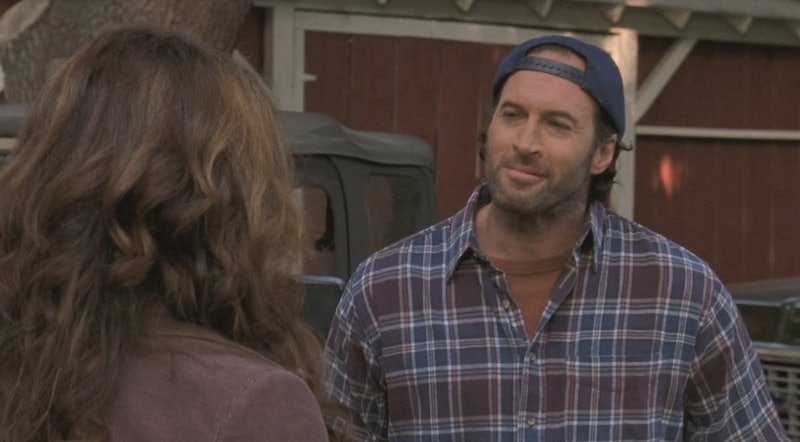 At its core, the main theme of Gilmore Girls always came back to family. We had our beloved Lorelai and Rory, who were best friends as much as they were mother and daughter. And Rory's acceptance to Chilton brought Richard and Emily back into their lives, giving Rory the opportunity to bond with her grandparents. However, the show was also about the families we create for ourselves that are not biological, but are equally important, loving, and influential. Stars Hollow itself was like one big, quirky family that gladly took in Lorelai and her daughter when they arrived in town. This is especially true of Luke Danes, who was essentially a father-figure for Rory.

Out of everyone in Stars Hollow, no one was more important in Lorelai and Rory's lives than Luke Danes, our favorite man with a heart of gold who preferred to masquerade as a grouch. Rory's biological father, Christopher, came and went from their lives and, although he had his paternal moments, he was notoriously unreliable and inconsistent. Luckily, Rory was never lacking a father figure who she could count on. Not only did Luke keep her and Lorelai well-fed (and caffeinated), but you'd be hard pressed to find a day or landmark event in her life where Luke was absent. Lorelai and Luke went through some rough patches, both during their time as best friends and eventually as a couple, but their rocky romance never affected the way Luke treated Rory.

In fact, Luke was such a father figure in Rory's life, that he more than deserves from Fathers Day well wishes.

Luke saw (and fed) Rory almost every day, but it was during the milestone events in her life that it was most obvious who her true father figure was. On her 16th birthday, Rory arrived at the diner for breakfast and Luke told her that she was at the wrong table: "...the coffee cake I baked for you and the stupid balloons I blew up are at that table over there." Despite the rift between mother and daughter, he and Lorelai attended Rory's 21st birthday bash at Richard and Emily's, where he gave her a family heirloom — his mother's pearl necklace (in typical Luke fashion, he played it off as no big deal).

Rory's Chilton graduation speech was undeniably her moment with her mother, but even unsentimental Luke was brought to tears for possibly the only time in the series. In his own way, he had helped raise Rory and was just as proud of her as any father would be — and deservedly so.

Luke also aided in Rory's trek to Yale, back to Stars Hollow, then back to Yale as Lorelai helped Rory move into her first dorm. In the series finale, he stayed up all night planning a last-minute "Bon Voyage" bash for Rory — complete with calling a secret town meeting (and we all know how much he despised those) before staying up all night sewing together hundreds of tarps and raincoats when he realized it was going to rain on the big day. As usual, he didn't take any of the credit, and Lorelai only found out when Sookie told her, despite promising Luke that she'd keep the big secret.

He Was Fiercely Protective

Like all devoted fathers, Luke believed that no guy was deserving of Rory. Lorelai had to all but physically restrain him from attacking Dean on the street after he broke up with Rory. Although Luke was thrilled when Jess and Rory struck up a friendship, he sent his nephew packing after Lorelai confronted him about the infamous car accident (which was totally not Jess' fault) and convinced him that Rory wasn't safe spending time with Jess.

Later, when a distressed Lorelai turned to Luke about Rory's decision to drop out of Yale, he presented a slightly over-the-top and implausible plan to keep Rory in school. His idea of holding Rory captive in order to keep her enrolled may have been illegal, but it showed his dedication to his surrogate daughter. He had witnessed firsthand just how hard Rory had worked, and seeing her throw it away pained him just as much as it did Lorelai.

Rory Viewed Him As A Father Figure Too

As a teenager, Rory was eternally hopeful that her biological parents would get back together. Christopher came and went as he pleased, but she was always happy to see her dad. Although Rory continued to be forgiving and never cut off ties with Christopher, she did grow to recognize that he didn't have the ability to unconditionally be there for his loved ones in the way that Luke did. When she learned that Christopher had been calling Lorelai for help with Gigi, she grew concerned that it would jeopardize her mom's new relationship with Luke. So she did something about it.

Although Rory was typically non-confrontational, she drove to Christopher's apartment to tell him in person that he needed to stay away from Lorelai. "He's kind and well... he's there," Rory said of Luke. This particular visit was undoubtedly motivated by Rory's protectiveness of her mom, but her words also rang true of her own relationship with Luke. He wasn't just there for her birthdays and graduation parties — he was there for her day in and day out, and she always knew she could count on him, even if he and her mom didn't happen to be on speaking terms that day.

In fact, when writing Luke's character reference for custody of his daughter April, Lorelai put it best:

I’m a single mother and I raised my daughter by myself. But once Luke Danes became my friend in this town, I never really felt alone. Luke and I have had our ups and downs over the years, but through it all his relationship with my daughter Rory has never changed. He’s always been there for her no matter what. He was there to celebrate her birthdays, he was there cheering her on at her high school graduation. Luke has been a sort of father figure in my daughter’s life.

Coffee aside, there's a reason the very first and very last scenes of Gilmore Girls both take place in Luke's Diner. The diner may have been Rory's second home, but Luke was always her primary father figure.Images: Warner Bros. Television; gilmorism, lukesdane/Tumblr; sarahmarieh/Wordpress