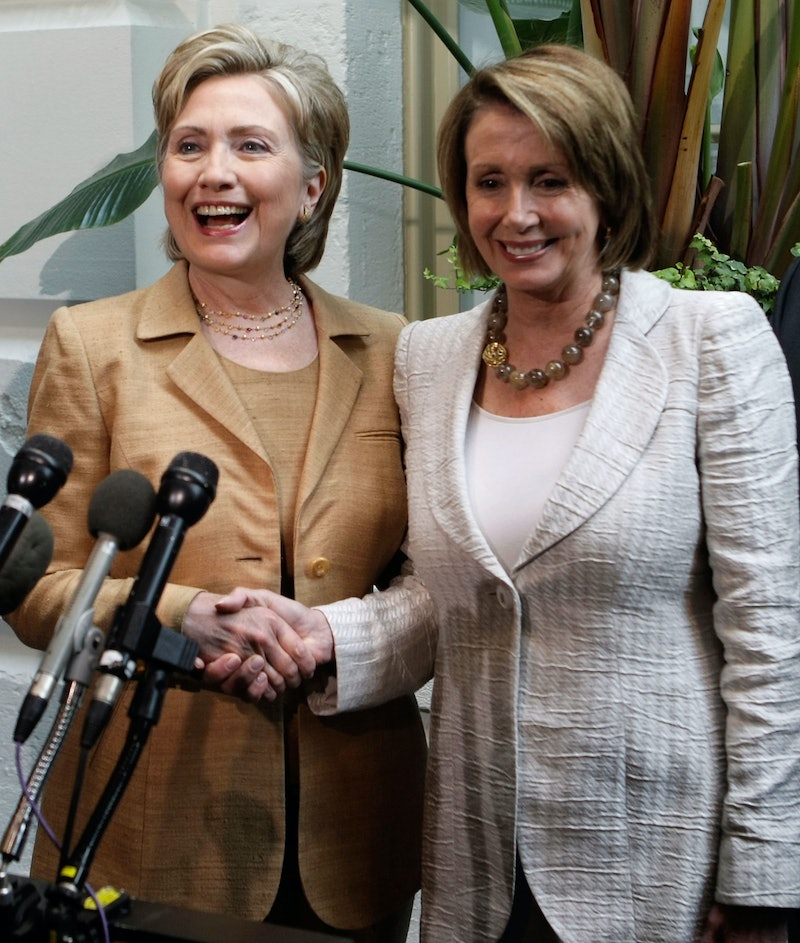 Just in case you forgot, the nation was just reminded that Hillary Clinton and Nancy Pelosi are basically best friends, not to mention two of the most recognizable women in the Democratic party. Clinton reminded us of their formidable friendship this week when she spoke out against President Obama's view on free trade agreements, stating, "The president should listen to and work with his allies in Congress, starting with Nancy Pelosi." In other words, let's not send a man to do a woman's job.

It probably gets pretty lonely being a powerful female politician in the boys' club of DC, so it's not surprising that these two have linked arms before to take on the patriarchy. But like all friendships, things haven't always been rosy. In 2008, Pelosi avoided coming out in favor of either Clinton or Obama before the primary results, and when it looked like Clinton couldn't win the nomination without the help of Congressional superdelegates, Pelosi urged the delegates to vote in accordance with their state primaries instead of swinging the vote in favor of Clinton. As you might have guessed, that resulted in Barack Obama winning the nomination.

But despite the awkward tension of 2008, Pelosi and Clinton's friendship appears to have become stronger than ever. Even though she didn't endorse her (now) BFF, Pelosi still had some kind words for Clinton when she returned to the Senate. “She has emerged from this campaign as the most respected political figure in America," Pelosi said. Who run the world? Girls.

Not enough proof that these two are best friend material? Here are four times they put ovaries before brovaries and proved they're the real Washington power couple.

When They Defended Each Other

During her 2008 run, Clinton received a lot of backlash for voting in favor of the war in Iraq, and it doesn't appear that voters have forgotten. But according to Pelosi, one decision does not dictate an entire political career, so, step off her girl.

"I don’t think a vote on a war 13 years ago… I mean this was wrong all around. Having said it, that was then, this is now. We go forward," Pelosi said during a press conference in April, when asked about Lincoln Chafee's belief that voting for the Iraq war should disqualify Hillary Clinton from the nomination. "There’s large number of people in both who supported the war, unfortunately because the consequences have been terrible in terms of what it meant to our veterans and the rest of that, but no, the answer is no. I don’t think it should disqualify her."

Not only did Pelosi shut down the question, but she took it a step farther, saying, "She’s so qualified. She has had great national security experience as a member of the Armed Services Committee and as Secretary of State. And for these and so many reasons she’ll be one of the strongest, best prepared people to enter the Oval Office in a long time." Now that's love.

When They Brag About Each Other

Long before she hitched her cart to Pelosi's trade plan, Clinton threw some love Pelosi's way in March when she discussed Pelosi's efforts as Speaker of the House and Democratic Leader, and as an advocate for women's issues. "Don't you love seeing Nancy Pelosi stand up against efforts to play politics with our security?" Clinton said at an Emily's List gala. "Nobody fights harder for middle class families day in and day out than Nancy does."

When Pelosi gave a speech in Arkansas in 2013, she made it clear who she would be endorsing for the 2016 nomination— her best friend, of course. "I pray that Hillary Clinton decides to run for president of the United States," Pelosi said. "...Nobody has been first lady and senator and now secretary of state. Putting everything aside that she is a woman, she'd be the best-qualified person that we've seen."

When They Know What's Best For Each Other

Although Pelosi has made no attempt to conceal her desire to see the next President Clinton, she also doesn't want Clinton to run uncontested. Because only your best friend knows that sometimes you need someone to keep you in line and challenge you.

"It's healthy for a party to have an exchange of ideas, to have a bench," Pelosi said when Bernie Sanders announced his campaign in April. "I don't think that anybody who's running for president should fear having someone else run for president, so [voters] can engage in the marketplace of ideas, which is what an election is all about."

When They Put Aside Their Egos

While Clinton hopes to become the first female president, she's not afraid to acknowledge that Pelosi helped paved the way for her possible success. Clinton regularly praises Pelosi for becoming the first ever female Speaker of the House, a position that has helped open doors to women in politics.

Pelosi's political resume is almost as long as Clinton's, and she has the political clout to back it up. But she's not jealous or intimidated by her friend's success— instead, she brags about Clinton in the way only a best friend could. "I am frequently introduced as the highest-ranking woman in political office in our country," Pelosi said in 2014 while hosting a women's power luncheon for Clinton. "I’d like to give up that title and elect a Democratic woman for president of the United States. And soon." #relationshipgoals