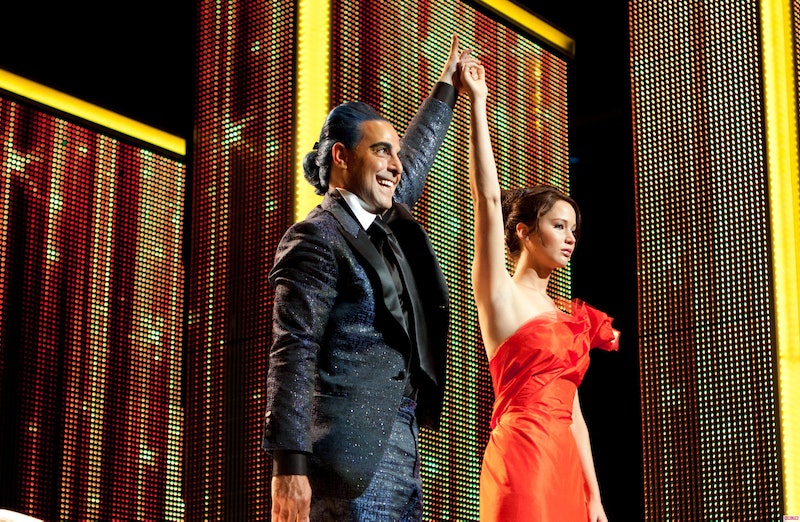 Hunger Games: Catching Fire release is just around the corner, and while we twiddle our thumbs in giddy anticipation for the second dystopian installment, let's take a look back at what went down in the first Hunger Games. If you haven't yet seen the 2012 original (first off: HUGE mistake), use this GIF-laden guide to get yourself up to speed in time for Catching Fire's Friday release. And remember: The odds of being totally confused without reading this "catch me up" are totally in your favor.

Katniss Everdeen, played with a high dose of badassery by Jennifer Lawrence, is a teenager who lives in Panem, a post-apoolyptic version of North America that exists in the distant future. Katniss lives with her mother, and her little sister Prim. Her father was killed in a coal mining accident and her mother has been distant and fragile ever since, leaving Katniss to be the family's main source of survival. She looks after her younger sister and hunts food (like squirrels and deer) for the family. Her BFF is Gale (Liam Hemsworth), an über attractive and brooding native of the woods, and naturally, there is a heavy bout of sexual tension between the two.

Every year, the Captiol (the fancy, douche-y place where all the one-percenters live) throw a "reaping" where they choose at random a boy and a girl (between the ages of 12-18) from each District to compete in the annual Hunger Games. The Hunger Games are the Capitol's sick and twisted way of showing their power over the 12 districts, by thrusting 24 teenagers into an arena where they must fight to the death, until a single victor remains. This and that happens, and to protect her sister Prim who is initially chosen to compete, Katniss volunteers to take her lil sis's place. Basically, she f*cked.

The Road to the Capitol

Katniss, along with a short boy who bakes bread named Peeta (Josh Hutcherson) are taken from rundown District 12 and brought to the glorious Capitol, where they are to train with the other tributes in all the diverse and infinite ways to kill a fellow teen. Katniss shows off her impressive archery skills, and Peeta is fairly decent at lifting heavy objects (but really, how is that going to help him kill someone?). Lenny Kravitz (adorned in gender-bending gold eyeliner) acts as Katniss' stylist and confidone, offering moral support before she is thrust into the games. And Peeta, who has been surprisingly quiet during the entire process, confesses his love for Katniss during his televised interviews, and Peeta and Katniss are played up as district 12's "star-crossed lovers".

Lucky for Katniss, this years games take place in a forrest-like arena, complete with trees to hide in and streams that offer refreshment. But the atmosphere is entirely controlled by the Captiol, and can change at a moment's notice. The first night in the arena, nearly half the tributes are killed. Katniss, who opts not to fight and instead hides at the top of a tree, uses her excellent hunting skills to seek shelter and find food in the forrest. Peeta appears to have joined up with tributes of the richer districts who are all looking to hunt down and kill Katniss. Confused and pissed (because didn't he just tell Katniss he loved her?) Katniss joins forces with Rue, a 12-year-old tribute who reminds Katniss of her sister Prim.

As the days pass, more and more tributes get killed. Rue and Katniss team up to destroy some of the other tributes supplies, but the plan ends with Rue's death, and Katniss, in an act of rebellion and respect for Rue's family, gives the young tribute a proper burial, dressing her body with flowers and covering up her wounds.

An announcement is made to the surviving tributes, telling them that for the first time ever, two tributes may be crowed victors if they are from the same district. Katniss immediately tries to find Peeta, and stumbles upon him in a terribly ill state. She finds them a secluded (read: conducive for kissing) cave, and nurses Peeta back to health. During there time together, Katniss appears to develop feelings for Peeta, and they kiss a bunch for "the cameras" (those watching across the districts), but we can tell she's pretty into it. And Peeta definitely is.

The End is Near

Eventually, the only remaining tributes are Katniss, Peeta, and some asshole named Cato. The three face off in a dramatic climax where Katniss and Peeta emerge victorious. They think the Games are over, believe they can go home, see their families, see Gale! (let the love triangle begin...). But no, the Capitol isn't that kind, and redacts their original change in rules. No longer can their be two victors. Katniss, being the smartypants risk taker that she is, has a plan. If they both can't live, they will both die. And with that sentiment, the pair each take a handful of poisonous berries, poised to eat them at the same time. But just then, the voice of the Capitol stops them both, realizing they intend to commit suicide. Both Peeta and Katniss are crowned the Hunger Game victors. Take that, Capitol!

But It's Only the Beginning

So they survived — awesome. But, the Capitol is not happy with Katniss' little trick with the berries, and Peeta finds out that Katniss' kisses in the cave might have been just for the cameras. More confused than ever, she dreads the moment she has to see Gale (who saw her smoochin' Peeta), and eventually face the Capitol once again.