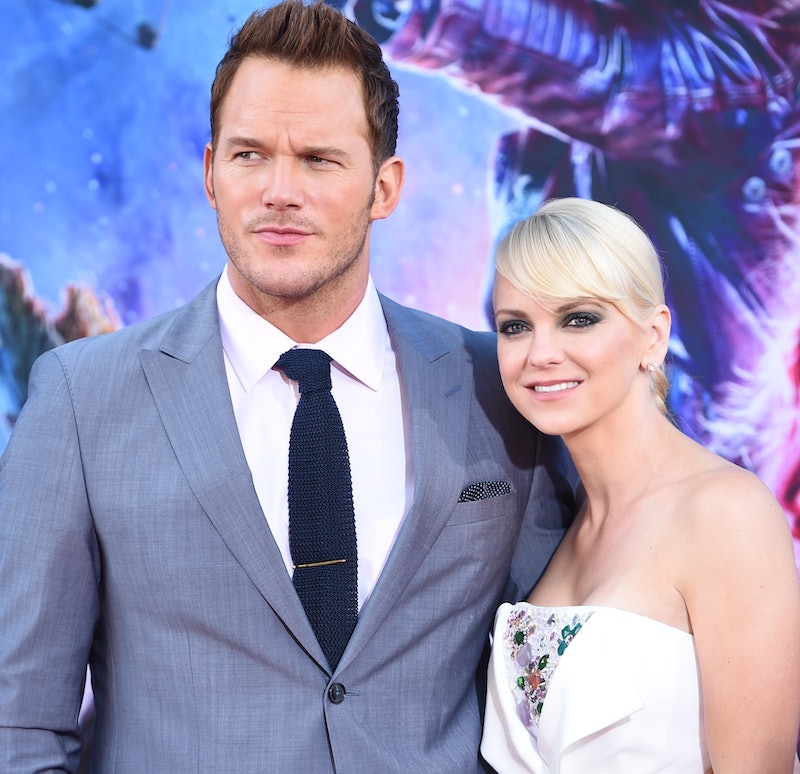 With promotion for Jurassic World in full swing these days, Chris Pratt is basically everywhere, and, honestly, it's kind of making my summer awesome. It's no secret that we love mega-movie star Chris Pratt around these parts but with every interview, dinosaur-themed photo shoot, and long, hilarious Facebook apology he makes, my adoration only grows. The best part about Pratt's summer tour of awesomeness? Almost every single interview he has highlights just how in love he is with his wife (the equally stunning and hilarious Anna Faris). Seriously, it's downright criminal how perfect Faris and Pratt are together, and how sweet a husband he is. In a recent interview with Entertainment Weekly Radio, Pratt revealed he doesn't film anything outside of the U.S. to stay close to his family.

"I don't wanna go across the Atlantic Ocean because it's just too far to go that way, and so far people have been accommodating." he says, but admits that sometimes exceptions must be made. "Listen, I'll do this movie but you have to give me 20 plane tickets and I'm gonna need these two weeks off." What's that sound? Oh, just me — melting into a puddle of goo.

It would be crazy to try and rank all of the times Pratt was a perfect mix of sweet and funny, so I've narrowed it down and compiled (in no particular order) the eight most swoon-worthy moments when Chris Pratt proved he is the best family man in Hollywood.

Any man can cook their wife breakfast in bed, but it takes a special kind of sweet to learn how to create a slick looking hairstyle for your wife on the go. Under the Instargram photo, he captioned: “This is a weird thing to brag about but I did that glorious french braid. #Baller #man #ManBraid #RealMenBraid#isItBrade? #SpellingQuestion #StillBallerTho#WhyIsItFrench??? #ICallItAFreedomBraid #GoUsa."

I don't think that's weird at all Chris.

2. When He Straight Up #Fangirled Over His Wife

When speaking to Interview magazine, Pratt had zero cool when talking about his wife, making it very clear that he thinks she is the hot one in the relationship:

Anna—that's where I'm truly pinching myself, because that's not fiction. I'm like, 'Oh my God, my wife is really cool, really hot, and really funny, oh my God.' What happened? I just want to know what terrible things happened in my previous life that give me the fortune to have this happen.

3. When He Knew He Married Up

Has he ever had an interview where he didn't heap praise on Faris? I hope not. In this interview with GQ magazine, Pratt proved he kner he was married to a future comedy legend.

Dude, totally. I married way out of my pay grade. I have no idea how that happened. She's so goddamn funny and so good. She is a legit comedy powerhouse. But I'm not going to question it too much. I don't know what it is, man. I guess chicks dig love handles or something.

4. When He Couldn't Stop Bragging

Let's take a break from Fairs for a moment, and talk about what a great father he is, and how darling he is with his baby boy, Jack. You can see him on Ellen being a proud dad in the clip above.

5. When He Went Home

Just look at that sweet smile! On Pratt, on Jack, on anyone who looks at this and pictures Andy Dwyer as a hapless parent. His social media is the jackpot of adorable photos of Pratt and his son.

6. When He Was The Disciplinarian

It can't all be sweetness and airplane rides, right? Pratt is also an active parent, taking the time to work with Fairs to raise Jack up right. "We try to present a unified front," he says in an interview with Conan O'Brian, sharing some parenting tips. Do yourself a favor and watch the video the whole way through; it's Pratt at his most exasperated.

7. When He Knew It Was Destiny

In a Reddit AMA, Pratt told the world that Fairs made him believe in destiny. Check out his whole sweet speech here:

8. When His Love Was Just So Obvious

I mean come on indeed, Ellen! This man never has a single complaint, and genuinely seems to be completely in love with his wife and family. Now that is sexy.

Your move, Ryan Reynolds. Your move.

More like this
Watch Chris Martin’s Surprise Performance At A Quaint English Pub
By El Hunt
Chris Hemsworth Joked That Baring His Butt In ‘Thor: Love And Thunder’ Was A “Dream”
By Brad Witter
Jesse Tyler Ferguson Had A Funny Run-In With A Fellow ‘Modern Family’ Alum
By Grace Wehniainen
What Does The Presley Family Think Of 'Elvis'?
By Arya Roshanian
Get Even More From Bustle — Sign Up For The Newsletter