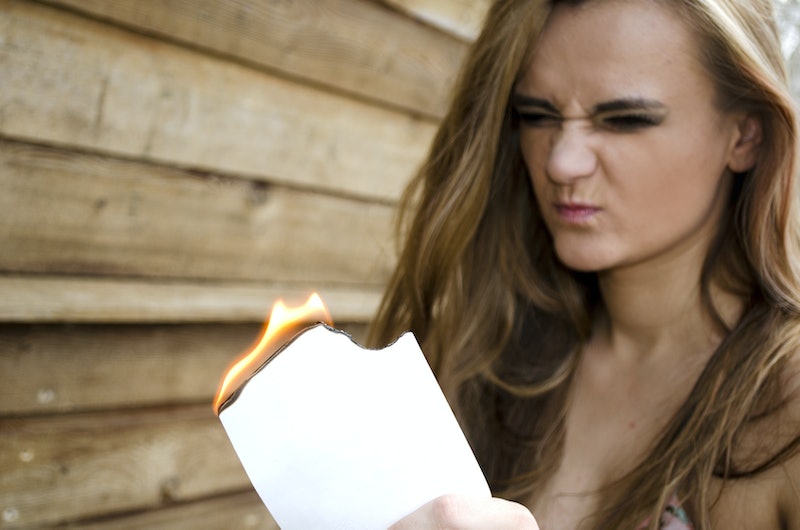 It’s been a few months since New York Magazine ran Maureen O’Connor's essay on the near-impossibility of true, clean breakups for the social media generation, but the article still gives me Very Millennial Chills. Thanks to Facebook and Twitter, she wrote, “We don’t have to shut the door on anything. Which is good, because shutting the door on something is not something we ever want to do.” And she’s right — I mean, did I not just extoll the virtues of (intelligently, pragmatically, and un-murderously!) online-stalking past and present love interests? I did.

But when a breakup goes beyond the painful pale, gaining some emotional and electronic distance from your ex is more than tempting — it’s necessary. “Any breakup requires breathing time,” says Dr. Pamela Rutledge, director of the Media Psychology Research Center. “And online, everything is amplified.”

This being 2013, there’s an app for dealing with heartbreak. A few actually, each designed to make splits a little less splitting. They run the gamut from you-can’t-be-serious (the app that dumps someone for you via text) to throw-it-on-the-bonfire (the app that purges all of your photos and interactions with your ex from Facebook). Before you blow a few bucks at the iTunes Store, though, Rutledge reminds that these apps, like breakups, “are person-by-person.” If you're looking to slam the digital door on your ex, make sure you know all your options.

The tech: Ever notice that Facebook’s “hide” feature is, like, not at all watertight? The Google Chrome plugin Eternal Sunshine does a much better job of tucking Facebook friends out of sight without deleting them. (Evidently, its developers are also fans of mid-aughts cinema. Way to ruin my headline, people.) There’s also Block Your Ex , another plugin that works on multiple browsers. It sort of magically vanishes your ex from your end of the internet — type in their name, social media account info, and blog name, and hey-presto, no more ex-o.

The pros: Setting up a temporary block is one of the more practical ways to technologically tend to a broken heart. Plugins like these allow people “to protect themselves emotionally, which they need” says Rutledge, and offer a chance to reflect. “They can say, ‘Maybe I’ll revisit this in three months.'”

The cons: The efficacy of such a download depends on the willpower of its user, and when one’s heart has been through the meat-grinder both ways, one tends to lack bushels and pecks of willpower.

The tech: Killswitch is the breakup app that means business. It takes a proverbial baseball bat to your Facebook account, deleting photos and interactions with exes. Users wary of permanently scorching the earth can save the data in an invisible Facebook folder.

The pros: This is a surefire and fairly permanent way to remove painful triggers from your life, and I bet the sense of catharsis is great. Plus, Killswitch’s invisible-folder option makes it a little bit easier to pull the trigger.

3. Save Yourself From Yourself

The tech: It’s not technically a breakup app, but Designated Dialer does the trick on nights when five gin martinis take precedence over dinner. The app lets you set a list of contacts not to call, and if you do try, you are redirected to a patronizing toll-free number. When you’re sober, you can unlock those numbers with a coordination test. On a more bananas note, there’s the app Ex Lover Blocker, which alerts your friends when you try to call your ex. Persist long enough, and it glibly informs all of Facebook that, yep, you’re calling that person you swore you'd nevereverever call again. Also, it’s in Portuguese, which makes it both unforgiving and confusing for those of us who don’t speak Portuguese.

The pros: Well, you won’t be calling your ex. “These apps create an area that forces you to think through and decide whether or not what you’re about to do makes sense,” says Rutledge.

The cons: Designated Dialer is pretty OK, actually — it will also keep you from sending slurry 2 a.m. work emails from the hot tub at Le Bain. But Ex-Lover Blocker... just, really? “It takes a normal human reaction and turns it into a parody,” says Rutledge. “The last thing you want when you’re emotionally wounded is to be shamed.” A better strategy, she says, is to focus on learning to self-regulate, which is generally a pretty good goal when it comes to using the internet.

For what it’s worth, Rutledge points out that social media offers as many opportunities for healing a broken heart as it does for tormenting one. “All of the sites that connect you with your ex also connect you to old friends and new professional contacts — positive people,” she says. “The trick is using these resources to create new social situations to help to fill the gap — or what feels like a gap — that a breakup leaves behind.”