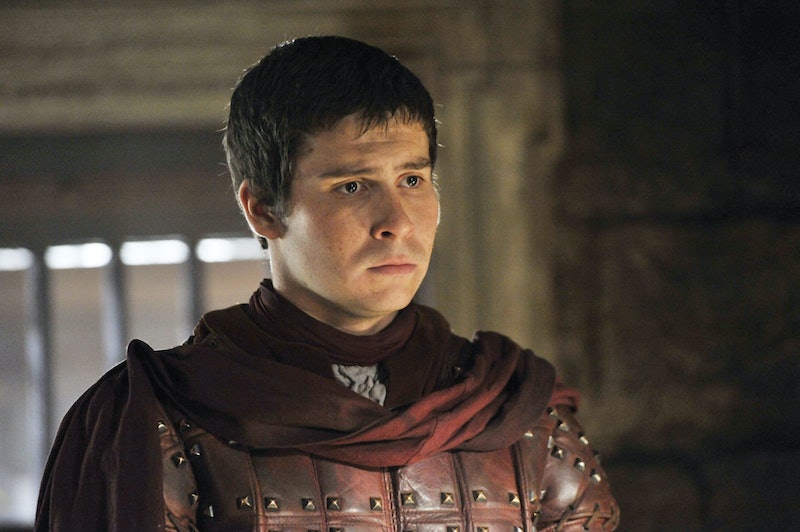 There have been a lot of different theories and questions floating around ever since Game of Thrones debuted its Season 5 finale. Is Jon Snow really dead? Did Sansa and Theon survive that fall? Is Arya's blindness permanent? Right now, the fate of all these characters is just one big question mark. But if we're really going to obsess over unanswered plot developments, I say it's high time we try and tackle the greatest Westeros mystery of all — like how Podrick Payne is so good in bed. Seriously, ever since he came back from that brothel and revealed that the ladies had refused to accept payment for their time with him (because apparently he was just that good), I've been dying to know what he did that was so impressive.

I mean, that kind of sexual prowess is "hard" to come by in any world, whether it be fictional or real life. And while I do understand that this was probably just the showrunners' way of adding a moment of levity to an otherwise very dark show, that doesn't make the concept of it all any less intriguing. We need to talk about this massive elephant in the room. Or maybe not-so massive? (Size isn't always an indicator of pleasure, after all.) So what makes sex with him so magical? It's time to start unlocking the mystery of Podrick Payne, First of His Name, Squire to Brienne of Tarth, and Sex God to All Women.

We know him to be a very loyal and obedient squire. Perhaps his ability to carry out instructions prove to be rather helpful in the boudoir as well. The women simply told him what to do, and he did so with gusto.

He's Respectful To His Lovers

Let's face it, most of their customers probably treat them pretty badly since, to men, payment somehow equates to ownership. So experiencing Podrick's adorable sensitivity was probably like a breath of fresh air for these women. That alone might've been enough for them to give Podrick their time for free. Perhaps his skill set had nothing to do with it.

We're all aware by now that Podrick cares more about others than himself and would gladly give his life if need be, while expecting nothing in return. Who else can we say that about on this show? (That's a rhetorical question since the answer, of course, is no one.) Imagine this guy bringing that sort of generosity into the bedroom? While most men just take, take, take, Podrick would give, give, give. That's enough to make any girl weak in the knees.

Hey, I never said I was above making penis jokes.

There's A Religious Aspect To It

I mean, you never know, right? The Lord of Light works in mysterious ways, so who's to say that he and the other gods don't have big plans for that particular appendage? Let's just hope that it doesn't involve leeches.

Then again, maybe he used another important part of his anatomy: his ears. He's always been a man of few words. Perhaps he just listened to the women vent about their problems and sex never even factored into the equation. Note that when Tyrion asked what it is that Podrick said to them, he responded: "I didn't tell them anything." Maybe that's because he didn't speak. He listened.

He Lied About What Actually Happened

I'd hate to think our beloved Podrick was capable of such a thing, but maybe he was simply trying to fit in with the guys and decided to build himself up a bit by lying. After all, when in Westeros…

For all we know, those mad skills are pure gods-given talent.

It Runs In The Family

Let's not forget who Podrick is related to on this show: Ser Ilyn Payne (aka the executioner who beheaded Ned Stark). If you recall, this guy isn't able to speak because the Mad King had his tongue removed with pincers after calling Tywin Lannister the true ruler of Westeros. But what if that was just a cover story and the real reason is because Ser Ilyn used that particular appendage on a woman that he shouldn't have. As horrific of a thought as it is, it could help explain where Podrick gets his talents from.

Now if you'll excuse me, I have to go get this image beheaded from my brain.