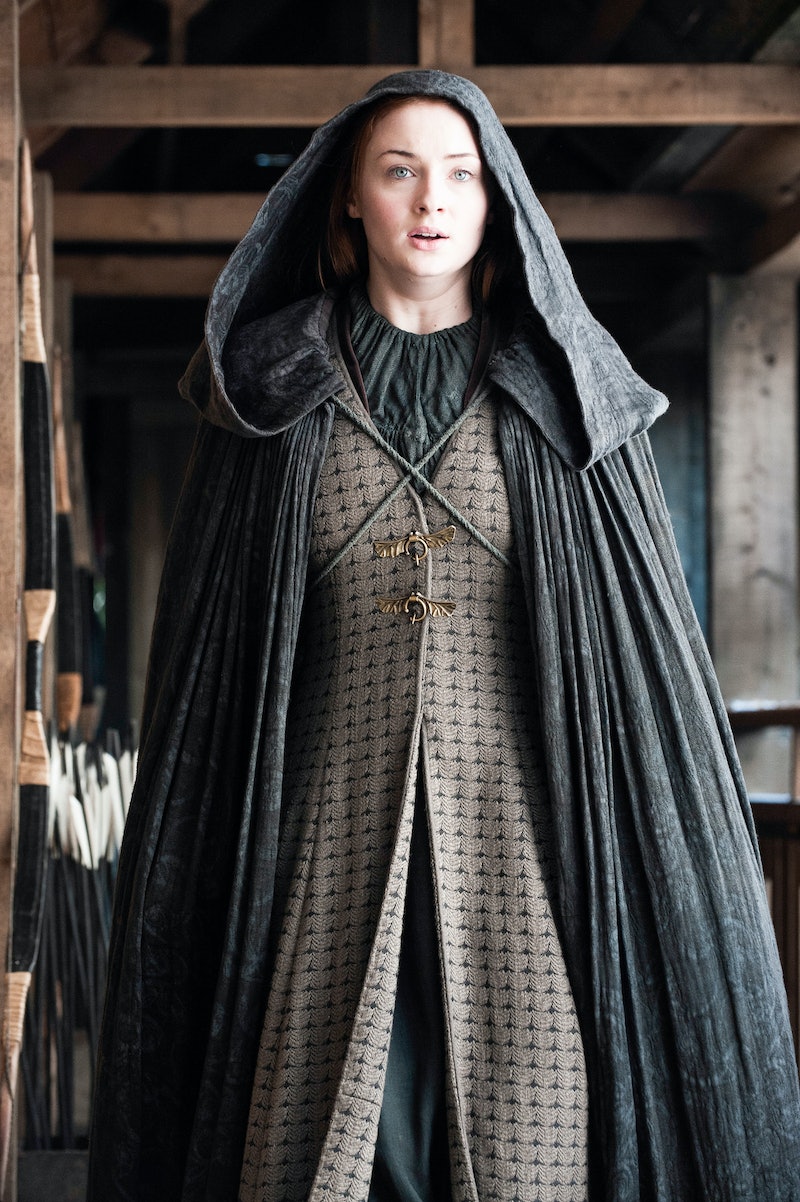 If you're still having a hard to recuperating from the shocking events that plagued the Game of Thrones Season 5 finale, then trust me when I say that you are not alone. Every bad thing that could've gone wrong throughout this hour, pretty much did. Between Jon Snow's (supposed) death, Cersei's naked walk of shame, and Arya's blindness, it was not a great day to be living in Westeros, in all honesty. But while everyone's been (rightfully) obsessing over Jon Snow's fate, I've found myself growing more and more curious about what lies in store for the eldest Stark daughter and whether or not Sansa survived that fall in the GoT finale.

I mean, obviously I know deep down she has to be OK… right? After everything she's been put through, it'd be downright cruel for the series to simply write her off in such an abrupt manner. Sansa deserves a much better death than that, especially since we, as fans, had such high expectations for where her character arc was inevitably leading. All season long, we watched as Sansa endured more pain and suffering than she ever has before, hoping that it was setting her up for a triumphant, game-changing moment. (Like, I don't know, killing Ramsay !) And yet, when her big escape day finally arrived, it was Theon who saved her rather than Sansa saving herself.

Granted, it was a joint decision for the both of them to take a leap (of faith and otherwise) off the castle's high ledge, which I guess could still be considered a courageous act. But I had really wanted this to be her shining moment, not Theon's comeback story. Even earlier in the episode, we see Sansa pick the lock of her bedroom door. But instead of escaping on her own, she went to the tower to light the candle, signaling to Brienne that she needed rescuing. (Come on, girl. Where's that take charge attitude we've been waiting for?)

As far as Sansa's come since Season 1, she's still relying on others to save her. So, you see, she simply can't die. I won't allow it. Not until she's developed into the strong, independent woman we've always known she could be. Now it's just a question of whether the writers feel the same way.

In what became a common theme this year, the show has opted to veer away from the books more so than it has throughout any other season, especially in regards to Sansa's journey. In the books, it was Sansa's best friend Jeyne Poole who married Ramsay (pretending to be Arya Stark at the time). However, since the show decided to have Sansa adopt Jeyne's storyline, it's unclear how much it intends to parallel the books. Like Jeyne, Sansa's had to endure Ramsay's mental and physical abuse only to later escape with the help of Theon. But given that in a preview chapter from The Winds of Winter , Theon ends up taking Jeyne to Stannis' camp (you know, the same Stannis that is supposedly dead now in the TV counterpart?), it seems unlikely that the show and books will continue to coincide in this regard.

So if Sansa is no longer going by Jeyne's storyline (or her own, for that matter), then where does that leave her moving forward? Unlike prior seasons, fans can no longer look to the books for answers — given that they have yet to be written — which leaves Sansa's fate rather open-ended at this point. My guess is they'll head toward the Iron Islands perhaps?

Either way, I'm sure she'll live to see another day regardless of how high up that jump may have looked — which is the same height that made Myranda go splat, mind you. (That snow probably cushioned some of the fall, though, right?) Plus, Sophie Turner's contract runs through Season 7, which is at least somewhat comforting. Let's just hope that when Season 6 debuts, Sansa will get the chance to stand on her own two feet and become the rightful agent of her own destiny. She deserves as much, and so do we.

Bustle reached out to Sophie Turner’s reps for comment, but they could not be reached at the time of publication.