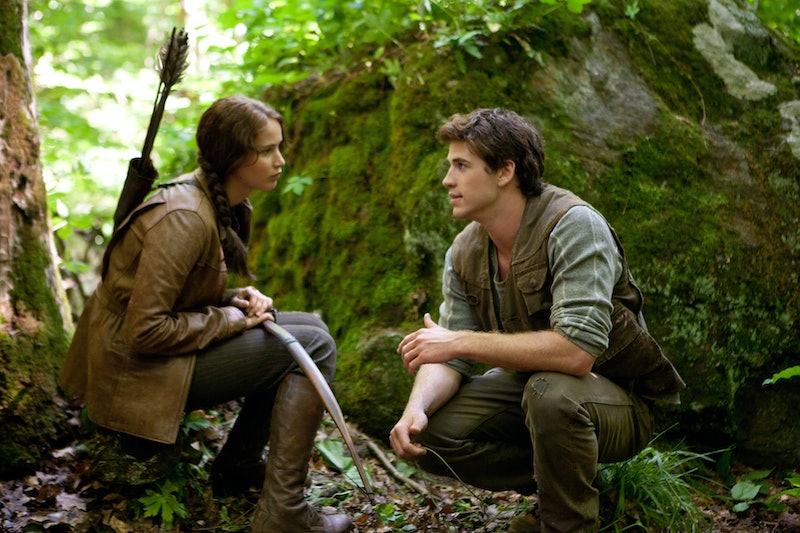 Jennifer Lawrence can seemingly do no wrong. But apparently she can. Did you know that she knocked co-star Josh Hutcherson out when they were fooling around on set, causing him to have a concussion? Yep. And did you know that she almost didn't accept the infamous role as Katniss Everdeen? Uh huh! To celebrate the release of The Hunger Games: Catching Fire , here's 17 little known facts about the original YA novel turned mega-blockbuster.

1. Back before she won an Oscar and was America's favorite, foul-mouthed actress, Jennifer Lawrence was fresh off Winter's Bone, and still flying under the radar. When she was approached to star in The Hunger Games, she was offered $500,000 to portray the dystopian teen. But for Catching Fire, Jen's paycheck skyrocketed to a cool $10 million, 20 times what she made for the first film.

2. Magic Mike's Alex Pettyfer, along with that kid from the Taylor Swift music video Lucas Till and Weeds' Hunter Parrish were all considered for the role of Peeta.

3. One day while the two "star-crossed lovers" were fooling around set, J Law got a bit aggressive and kicked Josh Hutcherson in the head, giving him a concussion... because apparently archery isn't her only skill.

4. Alexander Ludwig, aka the burley blonde who plays Cato, worked with a Navy Seal who busted his ass into shape for the role. "I had to put on 40 pounds for the role," he said. "It sucks so much. I did fight training, sword training. I also worked with a US Navy Seal. I wanted Cato to have as much of a physical presence as a mental one."

5. Both Hutcherson and Lawrence were born in Kentucky, a state that, just like District 12, is known for its coal mining and rural poverty. "Anytime you meet somebody that's from your home state, it's an instant bonding agent," Hutcherson told film critic Peter Travers of the connection.

6. To play the Capitol's best dressed Effie Trinket, Elizabeth Banks spent 45 minutes each morning before shooting getting her nails done.

7. But because of the lengthy nails, Banks needed help doing everything, including going to the bathroom.

8. J Law and Liam Hemsworth are both natural blondes, but their roles demanded dark hair so their natural color was dyed darker. Ironically, Peeta is a blonde, but Josh Hutcherson is naturally a brunette, so his dark hair was lightened.

9. Woody Harrelson is an awesome human being. He's also a vegan, so in the dinner scenes, he's only shown eating veggies.

10. The Hunger Games is the second time Paula Malcomson has played Jennifer Lawrence's mother on screen. The first time was in Cold Case: A Dollar, A Dream . (We haven't heard of it, either.)

11. The Hunger Games is the second movie (Winter's Bone being the first) where J Law helps her family survive by catching and killing squirrels.

12. A really amazing fan-given name for Katniss and Peeta is... (drumroll) "Peeniss".

13. The actor who plays Cato is also a singer. Check out his jam "Liv it Up" on Youtube.

14. Director Gary Ross wanted to make the film partly because his two twins are big fans of the books.

15. Famed architect Frank O. Gehry's buildings were the inspiration for the Cornucopia.

17. Lawrence was reluctant to take the role of Katniss, knowing the intense limelight it would subsequently shine on her life.