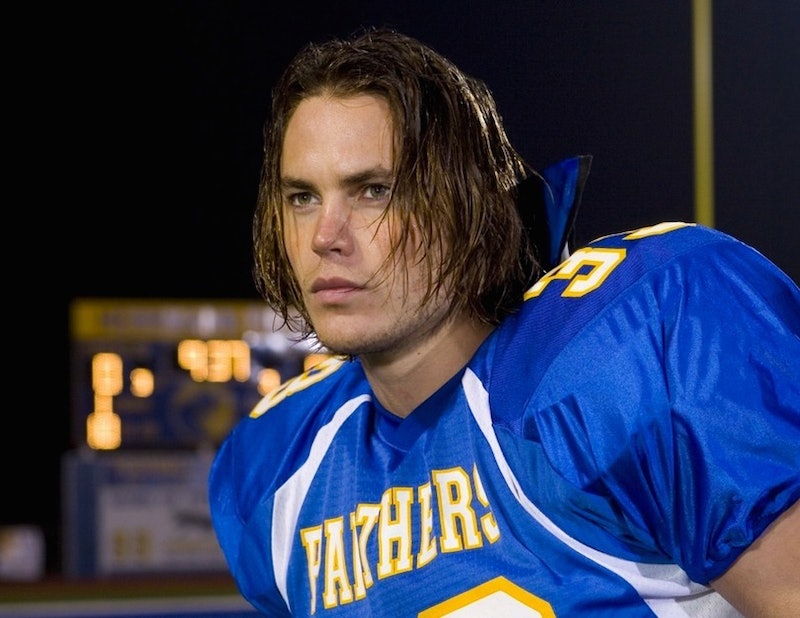 There's no denying that pretty much the entire cast of True Detective Season 2 is an impressive specimen of Hollywood talent. And while I'm very intrigued to see what the likes of Rachel McAdams and the usually comical Vince Vaughn will bring to this action-packed drama, there's one actor in particular that I'm most looking forward to having back on my small screen once more. Of course, I'm referring to Taylor Kitsch, who played Friday Night Lights ' bad boy Tim Riggins. Coach Taylor, Tami, and Jason Street were all very notable assets to the series, but make no mistake that Riggins was the true star viewers tuned in week after week to see.

To be honest, I've never really been all that into guys with hair on the longer side, but somehow Kitsch managed to make it all sorts of appealing. (And don't even get me started on that Southern accent!) But now Kitsch intends to bring a new character of his to the table for the HBO series in the form of Paul Woodrugh. As of now, we don't know all that much about this guy other than the fact that he's a war-veteran-turned-motorcycle-cop for the California Highway Patrol who discovers a crime scene that basically sets the whole plot in motion.

Sounds like a far cry from his high school football days, right? Well, just in case Kitsch feels like channeling his inner-Riggins (and really, why wouldn't he?), here are a few lessons Paul could learn from this Dillon Panthers athlete.

1. A Little Brooding Can Go A Long Way

Folks love rooting for the mysterious bad boy of the bunch. Paul should do well to remember that throughout his True Detective story arc. Sometimes silent pain can speak volumes.

2. Wear That Uniform With Pride

Riggins never looked more dreamy than when he was in his full football attire. (You know, other than the times he was just plain shirtless.) A police uniform should prove to be just as swoon-worthy.

Riggins' might've had an old, beat up truck, but he took really good care of her nonetheless. He'd tell Paul to do the same with his motorcycle. Heck, add a leather vest, some tattoos, and a pair of sunglasses and we could very well have a new Jax Teller on our hands. (Just kidding. There's only one Jax Teller. But still! You gotta admit, it'd be pretty hot.)

It was rare to ever see Riggins without a drink in his hand. And boy, what we wouldn't have given to be one of those containers.

6. Rely On Your Teammates

This investigation is going to involve Paul working with fellow members of law enforcement. I have a feeling he's going to initially be someone who prefers to work alone, however, Riggins would advise him against this. Being part of a team is much better than flying solo.

7. Grow Your Hair Out

Enough with the short hair, already. Give us those luscious locks!

The best advice for any situation.