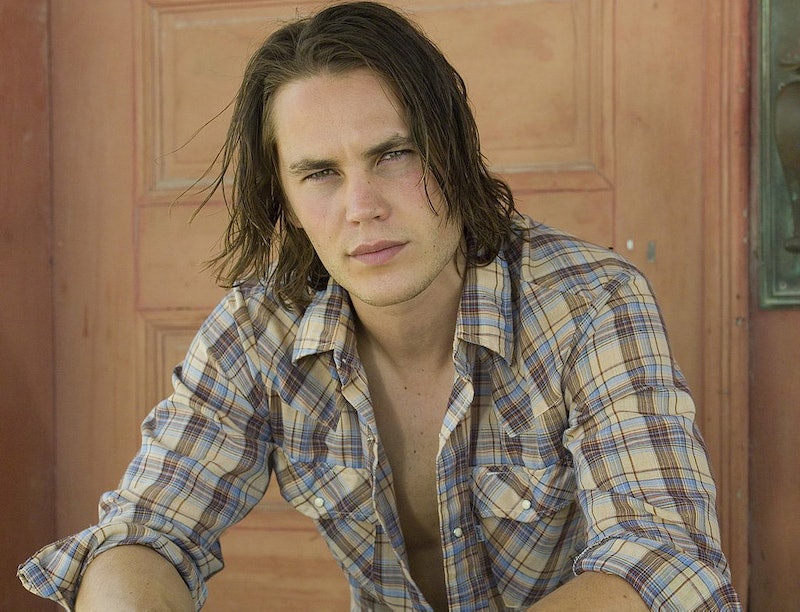 Ever since it was announced that Rachel McAdams and Taylor Kitsch would star in True Detective Season 2, fans of Friday Night Lights and The Notebook haven't been able to contain their excitement. I'm sure those same fans rejoiced even more when McAdams and Kitsch were spotted having dinner in Hollywood on Tuesday. Are they just friends? Are they linked romantically? So far, all signs point to two co-stars, who are probably friends, just meeting for a bite to eat. With that said, let's not focus so much on McAdams and Kitsch, but the well-known characters they're known for. Don't you think Tim Riggins and Allie Hamilton would make a great couple?

First, thank you, yes, I am a genius. Second, if the coupling doesn't make sense, give me a chance to explain. Despite being from different times, Allie and Tim would have quite the passionate relationship. Also, if you're a fan of Tim Riggins (sorry, Jason Street, Tim is my man) and Allie Hamilton, then why wouldn't you want them to be together? Or, at least, see if the pairing makes sense. You never know what would happen. Maybe they'd just make great friends, like McAdams and Kitsch seemingly are.

Here are eight reasons Tim and Allie would be a perfect fit.

1. It'd Be An Amazing Love Story

Similar to Allie and Noah and Tim and Lyla, Allie and Tim would have one magnificent love story. Both are from different walks of life, and while some might not understand why they love one another so much, their love and passion would surpass any outsiders judgments and turn into a love story for the ages.

2. Their Passion Would Overflow

Let's face it, both Tim and Allie love to argue, because they're so darn passionate. So, their arguments would be heated, but it would probably also lead to some hot makeup sex.

Tim never wants to stand in the way of anyone's dreams, so you know he'd do the same for Allie, whether that was going to school or pursuing her painting.

4. Allie Would Do The Same For Tim

Allie would also only want the best for Tim, especially when it came to his dreams of playing football. Even if football might not work out, Allie would be by Tim's side no matter what.

5. Tim Would Get Allie Out Of Her Comfort Zone

Unlike Tim, Allie has more a sheltered life, so Tim's partying, antics, and fun side would definitely push her out of her comfort zone. Relationships are all about growth and trying new things, right?

6. They'd Know The Right Thing To Say At The Right Moment

Yep, these two sure have a way with words. Whether they're telling each other how they feel or just trying to make one another feel better after a difficult day, both Tim and Allie would know the exact thing to say.

Step aside Noah, because Tim's probably going to build Allie a house on his piece of land — with a wraparound porch and a room for her art supplies.

8. They'd Learn From One Another

Growing up differently and living life by opposite rules doesn't mean two people aren't meant to be. Just imagine how much they would learn from another.

More like this
Paapa Essiedu Likes To Keep His Relationship Pretty Private
By Maxine Harrison
John Mulaney & Olivia Munn's Relationship Timeline Features The Comedian's First Father's Day
By Jordyn Tilchen
Everything We Know About When To Expect Money Heist: Korea Part 2
By Kadin Burnett
Viktor Hargreeves’ Coming Out Scenes Are The Sweetest Part Of Umbrella Academy Season 3
By Gretchen Smail
Get Even More From Bustle — Sign Up For The Newsletter