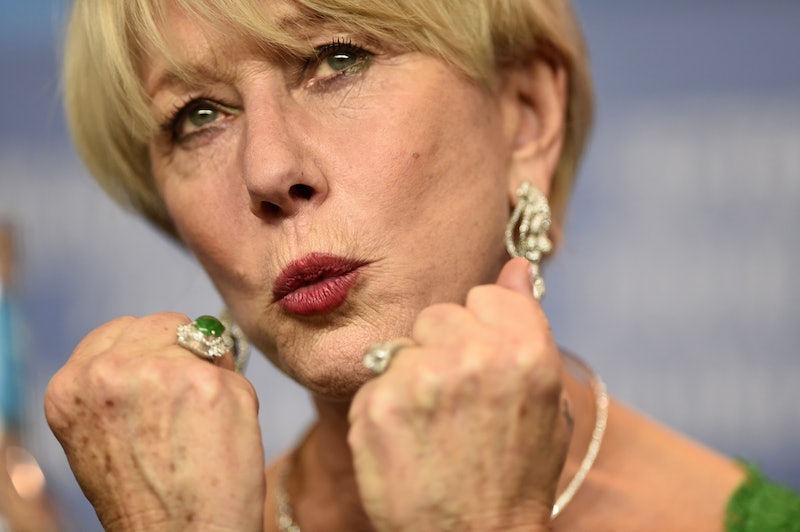 I feel like all of us probably want to grow up to be like Helen Mirren. We should be so lucky! At nearly 70 years old, Mirren is endlessly flawless in every way, and she's not showing any signs of slowing down. Not only is she a tremendously talented actress, but she's also a consistently amazing advocate for feminism and women as a whole. Ugh, she's so great, and even though it seems impossible, she got even more inspiring at TheWrap's Power Women Breakfast in New York City on Tuesday, June 16, where she opened up about issues like sexuality and ageing gracefully in Hollywood and was basically her usual badass self.

Sitting down with TheWrap CEO and founder Sharon Waxman, Mirren admitted that she hates being valued for her looks and abhors descriptors like "sexual" or "beautiful" as she finds them reductive and inconsiderate of aspects of herself that she values far more. "Sexual is so limiting. Beautiful is so limiting. There’s got to be another word," she explained. And she's right. What about the value of more important things, like intelligence, kindness, openness? While there's nothing wrong with being sexual or beautiful, it does become a problem if those adjectives come at the expense of all others.

This is especially true when it comes to growing older in the industry. Mirren offered her thoughts on dealing with ageism in the industry, touching upon Maggie Gyllenhaal's recent revelation that she was told by a casting director that she's "too old" at 37 to play the lover of a much older man. Upon hearing the story, Mirren confessed that she wasn't surprised, but finds the whole scenario is "f***ng ridiculous" given that men are not held to the same standards when it comes to their changing appearances in front of the camera. "It's incumbent upon us to do something about it," she insisted, "Not just to sit back and [accept it]."

With a successful career that spans nearly half a century, you would probably expect Mirren to be fearless due to having pretty much seen and done it all. And yet, as she revealed, that's not the case at all. Even now, she still battles with nervousness not just in her career, but in all areas of her life. Her advice, however, is valuable to all of us. "Don't be foolish, but don't be afraid of fear. I’m frightened all the time, of everything, really," Mirren admitted. "The point is not to be afraid of the fact that you’re afraid. You get on with it."

Of course, she realizes that this is easier said that just getting over our insecurities can be difficult and she's sympathetic, but mindful not to take her feelings out on others. "Your fear is your own business, it's not anyone else's. It's unfair to put your insecurities on other people," Mirren counseled. "Don't be selfish with your insecurities. It's your private business." I don't think I've heard such good advice in a long time, and if following it makes me more like Helen Mirren, I'd say it's worth following.