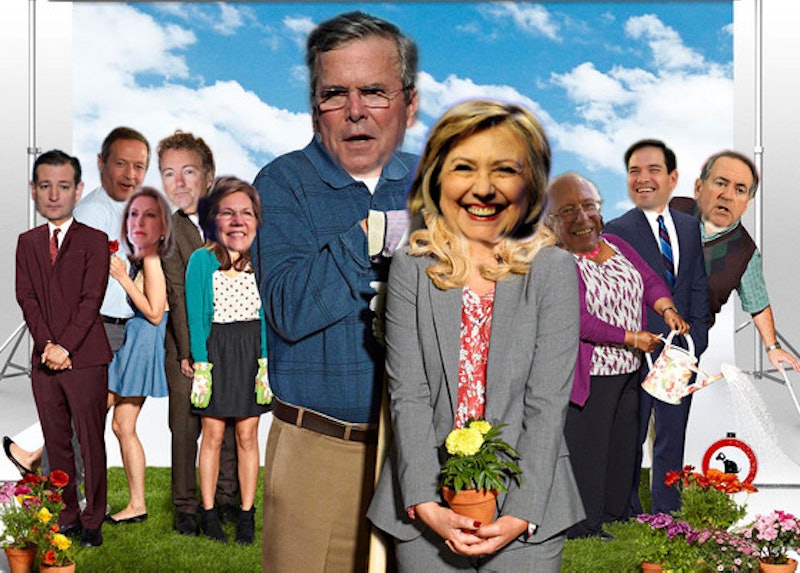 Since Donald Trump announced his candidacy for president, the upcoming 2016 election is starting to feel like a sitcom. The specific candidates are falling into stereotypical sitcom tropes, and I personally keep waiting for Hillary Clinton to get all self-aware and make eye contact with the camera like she's on The Office. When you think about it, the idea doesn’t sound too far from reality.

The show would probably be the best amalgamation of Parks & Recreation, The Office, and The West Wing, which means it would entertain for hours. Set in Washington, D.C., the comedy would chronicle the everyday lives of the 2016 candidates and highlight the ridiculousness that is the election. Imagine the series starting with Jeb Bush walking into a room for the Republican candidates... only to find there aren’t enough seats. Vice President Joe Biden guest stars at least once a season, and Elizabeth Warren bows of the candidacy even though everyone wants to see more of her.

And the best part is that your new favorite sitcom would be guaranteed through 2016, so there’s no need to worry about it getting canceled before the cliffhanger at the end of season one is resolved, and we finally find out who gets the Republican nomination. Don’t lie, you’re already invested. Here are a few episodes that we know you would love to see.

The One With The Girl Gang

Things get a little heated when Rand Paul accidentally yells at Clinton during a debate, and Clinton is not amused. The other candidates don't seem to understand the problem though. In an unlikely alliance, Clinton teams up with Carly Fiorina, and the two battle to undermine the patriarchy. Hilarity and witty one-liners ensue.

The One With The Experimental Entrances

Trump's signature schtick is his sassy entrances and humorous one-liners. Of the 2016 cast, he's basically Kramer and Chandler Bing rolled into one. In one episode, the rest of the gang makes fun of his now-customary escalator gag, so Trump goes on a journey of self-discovery to see if there's more to him than his great hair and stylish transportation.

The One Where Jeb Sneaks Out

Jeb Bush's family is holding the annual Christmas party, and he really wants to go. But when he finds out that Clinton and her husband, Bill, will be there, he feels a little awkward. He and Clinton are supposed to be arch-nemeses... but she always brings the most delicious lobster puffs. The other Republicans are already giving him a hard time because his brother George W. is buddies with the Clintons. Audiences are delighted as Jeb concocts an elaborately convoluted plan to sneak out of the RNC party without being noticed. Spoiler: It involves stuffing his blankets with pillows.

The One With The Money Problems

Marco Rubio has decided to run for president and is on top of the world... until he realizes that campaigns require money and he has some serious financial struggles. In an attempt to raise the money, Rubio bounces around a series of oddball jobs that the other candidates offer him, but none of them feel like a good fit. At last, Rubio thinks he's found the solution to all of his problems — until Trump fires him.

The One With The Moral Lesson

What's a sitcom without the token episode trying to ram home a moral or social lesson? Set against the backdrop of Trump's attempt to build a wall in the backyard, Bernie Sanders spends the majority of the episode delivering eloquent soliloquies on social justice and pacifism that would give Wilson from Home Improvement a run for his money. Trump eventually gives up on his wall, calls Sanders a loser, and goes back inside.