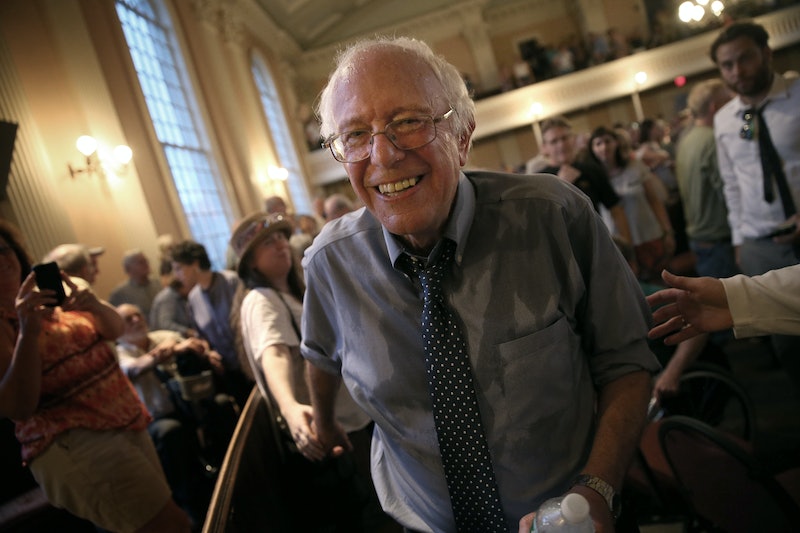 At the moment, presidential hopeful Sen. Bernie Sanders (I-VT) doesn't have an account on Snapchat. However, you can only wonder what pictures and videos you'd find if Bernie Sanders did have a Snapchat like his rivals Hillary Clinton and Jeb Bush, who have recently incorporated the popular millennial app into their campaigns. At 73 years old, Sanders may be the oldest presidential hopeful in the race at the moment, but he has no shortage whatsoever of skill or popularity when it comes to social media.

Sanders has attracted a wide number of followers on Twitter, Facebook, and Google Plus, and more recently, posts about him have become regular additions to Reddit's homepage. Back in 2012, he won a Shorty Award as the "best member of Congress on social media." Sanders' long status updates generally lack keywords for search optimization, and yet, written by Sanders himself, they sometimes rack in tens of thousands of shares and likes. Snapchat may be an app used primarily by millennials, but Sanders' general mastery of social media outlets would indefinitely lead to an interesting story or two. Based on his democratic-socialist campaign, his support throughout the civil, gay, and women's rights movements (probably before you were even born), his plans for making public American college education free, and his quirky charm, here are five pictures or videos of things you'd probably find in Sanders' Snapchat story.

1) His Participation In The Historic Civil Rights Movement

Back in the early 1960s, while enrolled at the University of Chicago, Sanders was a coordinator for the Student Nonviolent Coordinating Committee, which often worked in conjunction with famous civil rights leader Martin Luther King, Jr. Sanders also joined Chicago students in the March on Washington. Civil rights protests of the '60s eerily reflect modern #BlackLivesMatters protests. While Sanders was peacefully protesting for civil rights movement, former Florida governor Jeb Bush was probably learning mixed fractions in elementary school.

Sanders keeps a list of 18 priorities on his Senate website. This impressive list includes civil rights, women's rights, energy and the environment, education, primary health care, the economy, and, ah, of course: the essential dental care. Sanders' teeth are in less-than-immaculate shape, and so this should hardly come as a surprise. According to his Senate website, dental care is a priority to Sanders because it is too often overlooked:

When we talk about the health care crisis in America we often ignore a very important aspect of that crisis: that tens of millions of Americans are unable to access affordable dental care and they suffer as a result of that.

3) His Wariness Of The NSA

Bernie Sanders has admitted that he actually agrees with Republican presidential candidate Sen. Rand Paul (R-Ky.), who is famous for his very conservative political values, when it comes to the threat of NSA surveillance. "What is very clear is that technology has significantly outpaced public policy. So probably, there is somebody who knows exactly where you are at this moment," Sanders told Katie Couric for Yahoo News earlier this month. Sanders may be far from a paranoid demagogue, but I think it's possible that he'd use his Snapchat story to warn supporters of the evils of government surveillance — who knows?

On Feb. 27, Sanders sent a letter to President Obama without Congress, urging him to act on his own to eliminate tax loopholes for the most profitable corporations. Granted, the letter was not written in size 30 Courier New font, but it's possible that Sanders would write the letter in TL;DR (too long; didn't read) form and snap a picture of it in a big legible font for his Snapchat story. After all, men of Sanders' age probably don't think too highly of millennial literacy. At any rate, Sanders is famously against tax cuts for the wealthy and for large corporations, and he doesn't seem afraid to use social media to demonstrate this. #RebelStatus indeed!

5) His Comments On The Gap Between Rich And Poor (And Some Interesting Women's Rights Comments, Too!)

"The gap between the very rich and everyone is wider than at any time since the 1920s. The issue of wealth and income inequality is the great moral issue ... the great economic issue ... the great political issue of our time," Sanders said of the divide between rich and poor while he was the mayor of Burlington, Vermont. He's also made some profoundly open-minded comments regarding women's rights that essentially prove that Sanders is a feminist, whether he openly introduces himself as one or not. It's more than possible that if he had a campaign Snapchat, he'd cleverly combine his progressive economic views with his progressive women's rights views into one epic picture for his story.