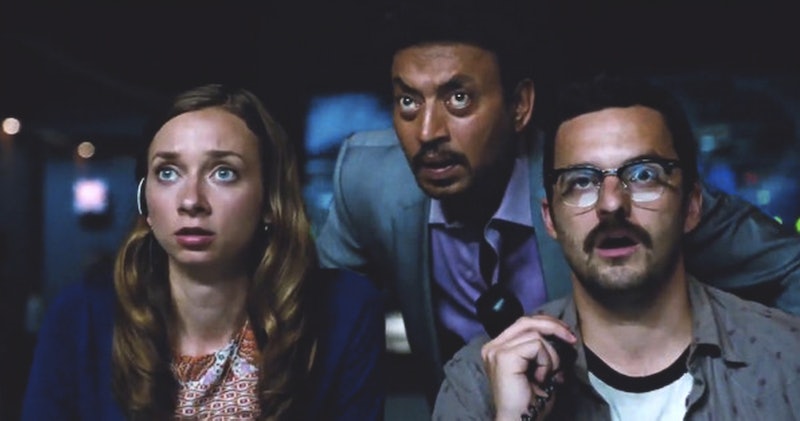 The biggest entertainment releases of the past week are almost certainly Jurassic World's record-breaking box office opening and the third season of Orange Is The New Black. While the two don't appear to have much in common — there aren't too many dinosaurs in Litchfield Penitentiary, after all — they do come together because of one actress. Lauren Lapkus appeared in last season of Orange Is The New Black as the kind prison guard Susan Fischer. She's also in Jurassic World as Vivian Krill, one of the Jurassic World control room employees. Her (sort of) love interest in the film is Lowery Cruthers, played by New Girl's Jake Johnson. So what I'm saying is that this is where New Girl, OITNB, and Jurassic World are basically connected.

Minor spoilers to follow. In this latest installment of the Jurassic Park series, Cruthers and Krill work in the Jurassic World control room together. Spoiler alert: they almost kiss, but then here's an awkward hug that was apparently improvised, according to the actress' reddit AMA. Basically, as Cruthers leans in for their romantic moment before Krill goes out into danger, Krill stops him to say that she has a boyfriend. It then becomes an incredibly awkward hug. Oddly, their romance is pretty similar to the non-romance between her character and Joe Caputo on OITNB, obviously accounting for the fact that Jake Johnson is a much more appealing, less creepy, and a more age-appropriate partner than Nick Sandow (who plays Caputo on the Netflix series).

If you need a refresher on Season 2, Caputo had a crush on the pleasant new guard Fischer. When he starts to get too friendly, she introduces him to her boyfriend. It's a pretty similar kind but firm shutdown to the one she gives Cruthers in Jurassic World. Poor Lapkus, always turning down the insecure dudes who assume she's available simply because she's around. Lapkus is also a writer and a gifted comedian with her own podcast. As some redditors commented on her AMA, it's about time for her to have a leading role.

Maybe, just maybe, Jurassic World is the start of her next career phase. Fingers crossed!