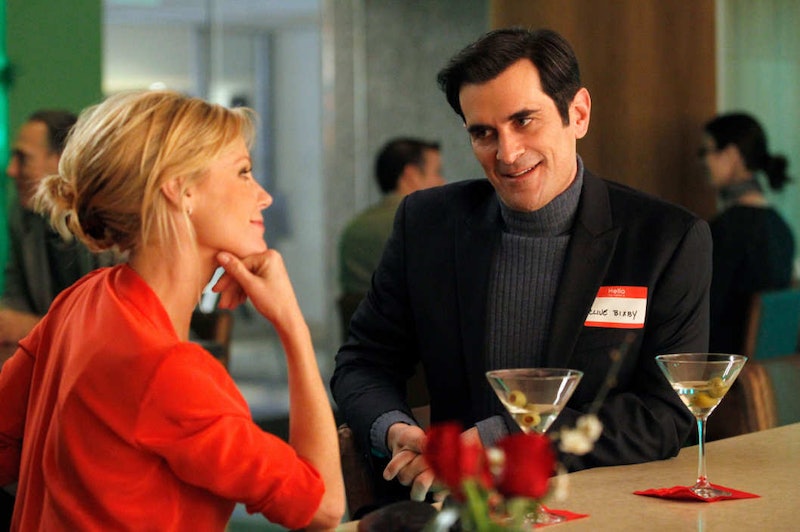 Today in existential crises: everyone I'm attracted to is fictional... literally. This actually isn't a revelation if you've ever made a passing glance at, oh, everything I've ever written. However, with Father's Day coming up I'm especially getting reflective on the myriad of TV DILFs that have been flooding my Netflix feed. Yes, you heard me right, DILFs, as in, dads I'd like to... well, you know. Dads can be hot too, OK?

The hot TV dad has been a long standing tradition since the days of I Love Lucy's Ricky Ricardo and The Dick Van Dyke Show's Rob Petrie. He exists to guide his children through the trials and tribulations of adolescence, all the while making the adults in the room uncomfortably swoony. He's available in every genre, be it comedy, genre... cartoon, if you're into that sort of thing (but that's a post for another day). Though considerable archetypes are prevalent (the bumbling buffoon, the hot young single dad, etc) there's definitely a spectrum of DILFs that I personally would try to nab. And though I'm sure you have your own picks that you'd vouch for, I'd love for you to consider the following.

Remember kids, this Father's Day, celebrate your dear old dad, as well as these charming men you kinda wish you'd snagged before they settled down. There are some lucky, lucky moms out there in television land, OK?

He's a lawyer with a heart of gold and thick, glorious eyebrows of justice. What's not to love? I think once you got over the weirdness of Seth (your ultimate crush of 2004), being your step-son, this would be a great investment.

He has your back in a zombie apocalypse, and that's really what you want in a man. Also, as much as love stubble, who can forget when he shaved his salt-and-pepper-and-blood beard this season and distinguished himself as the Sheriff of Babe City?

Love Donald Faison, and what's more attractive than his lip sync to Bell Biv Davoe's "Poison"? To quote the Janitor, "I don't know what 'it' is, but he's got it." Only issue is, you'd always play second fiddle to his one true love... you know, JD.

Honestly, football is right up there on my list of things I don't give a damn about. But I'm forever jealous of Tami for her somehow constant supply of white wine and easy access to this American hero.

Cute as he is, Rufus has to make you side-eye a bit for being perpetually known as a member of Rolling Stone's ninth forgotten band of the '90s and, for being um... basically a trophy husband. I love him for clinging to the vestiges of his youth (I mean, he looks about five years older than his son, so weird), but also have to question it in a Gossip Girl post-mortem. Still, he lands a spot on my list because he's basically every guy I've ever dated 20 years later... in their best case scenarios.

"What? Seriously?" Here's the sitch, Marshmallows: Keith has a good sense of humor about being exiled from the town and the entrepreneurial skills to set up a P.I. agency. He's not your conventional pick, but his heart makes him someone you'd be happy to settle down with, even when he ruins your family's reputation. Also he's basically who a lot of my friends' boyfriends will be in 20 years... they are currently known as "hat guys."

Some hot dads are born, and others are created... wait, that makes no sense. Um. The thing is, Jim is among a group of TV dads that earned his dadness mid-series, but before that he had all the humble appeal of your cute-as-hell work crush. Sometimes I'll come across a rerun of The Office and watch the PB & J dynamic with the constant mantra of "Relationship goals! Relationship goals!" Other times I want to throttle Pam and steal Jim away to have many flip-haired babies with him. Depends on the day.

Criminal activity aside, I don't think I have to argue this one since he has an ass that looks like it was carved by seraphs.

There are only so many times I can listen to his cover of "Forever," truthfully. Jesse, in many subtle ways, is sort of a proto-Rufus Humphrey in how he leeches off other people and tries to make the band work. Still, what's fair is fair, and I'll watch Full House on mute for daaaays just to see this Greek god.

I love him because he tries.

Terrible parent, and an even worse husband, but this isn't Dads I'd Like To Marry. Let's face it, in spite of all his faults Don Draper isn't only the one TV dad that would be easiest to snag, but the one who has you after one devilish glance. Filed Under: the DILF you, me, and my mother would all throw morals out the window for.

Dear god. While some of you may be put-off by his ceaseless goofiness, I would give it up to Phil in a second. Not only is he 110 percent the sweetheart you hope will help you bear children one day, but he's easily the most hilarious part of that show (with Cam a close second, but I don't think that's gonna work out for me). Yes, I will stand by Phil Dunphy as the pinnacle of DILFs, because at the end of the day, we all want to end up with someone who can make us laugh.

So there you have it. Happy Fathers Day, Hot Dads of Television!