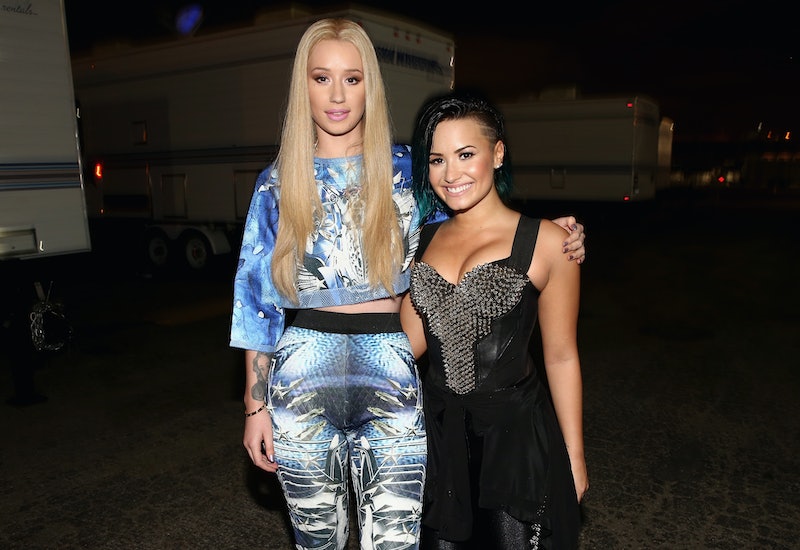 There are a lot of ways to solidify a friendship in a ceremonious sort of way. When you’re a kid, it’s usually through a friendship bracelet or a heart necklace split in half with each of you having either the “best” or “friend” etched pieces. But, when you’re an adult, things take a grander turn. Case in point, Iggy Azalea asked Demi Lovato to be a bridesmaid in her wedding, which, in the scheme of friend things, is kind of a big deal. Bigger than any multicolored makeshift jewelry homage you can make at summer camp, that’s for sure.

On The Late Late Show, James Corden asked Azalea how many bridesmaids she'll be having in her upcoming wedding to NBA player Nick Young, and she said, “Four. Literally everyone I'm friends with... Demi Lovato's going to be one of my bridesmaids.” Now, what’s that they say about quality over quantity? It seems that Lovato is being given quite a high honor being included in such an exclusive group.

The rapper obviously knows what she’s doing, though. Aside from the singer being close to her heart, Lovato also brings a lot to the table. The "Neon Lights" singer is an ideal wedding party participant, and here are six reasons why.

1. She Can Provide The Entertainment

I mean, Azalea did say herself that "She better sing at my wedding!" She doesn't even have to hire a live band or a DJ!

Sure, this is typically the maid of honor's duty, but you never know what's going to happen the day of. Some people get stage fright and Lovato isn't one of them.

Basically, she'll ensure that the party and the dancing will keep going.

4. She Knows How To Pose

Being a pro at the whole red carpet thing, picture time should go smoothly. Hey, maybe the wedding party will even make it to cocktail hour.

So the bride's thunder won't be stolen.

6. She's Been Prepping To Help Hold The Train And/Or Skirt Of The Dress For A While Now

Which, any bridesmaid knows, is an incredibly important job, especially for when the bride has to go to the bathroom.

More like this
Demi Lovato, Jessica Chastain & More Stars Celebrated The 4th Of July By Protesting
By Jake Viswanath
Adele Says It Would Be “Wonderful” To Have Kids With Boyfriend Rich Paul
By Jake Viswanath
Who Is Betty Who Dating? The Australian Singer Is Married To Her Tour Photographer
By Radhika Menon
Rihanna Is America's Youngest Self-Made Woman Billionaire, According To 'Forbes'
By Hugh McIntyre
Get Even More From Bustle — Sign Up For The Newsletter