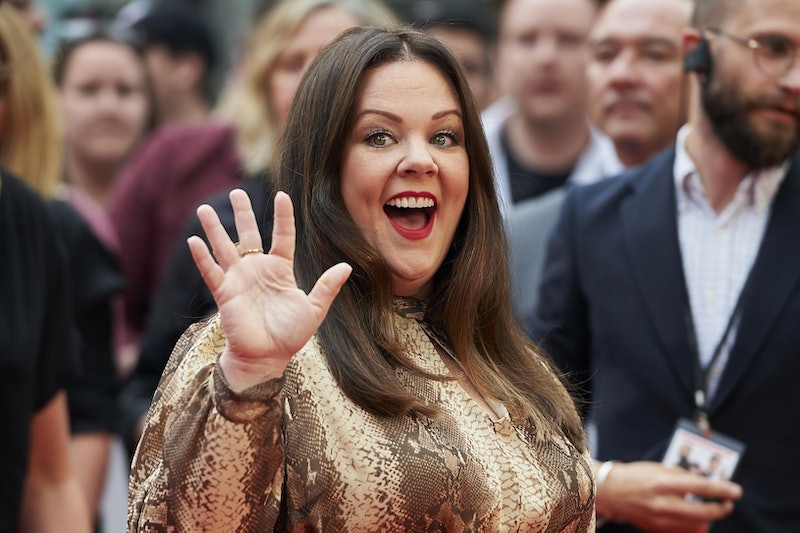 Thanks to the genius that is Paul Feig, we now know the answer to that age-old question, "Who ya gonna call?" It's Kristen Wiig, Melissa McCarthy, Kate McKinnon, and Leslie Jones, the stars of the upcoming and highly-anticipated all-female reboot of the '80s classic sci-fi comedy Ghostbusters. The first images of the Ghostbusters cast onset in Boston recently leaked online and they will make you burst with ooze! Or joy. Definitely joy. In the film, Kristen wiig plays a Columbia professor who is kicked out of the academic community when a book she co-authored with McCarthy's character about the existence of ghosts surfaces. Needless to say, she gets to rub it in their faces when things get paranormal.

The cast's outfits in these shots already tell us quite a lot about the characters and what we can expect from the film. Unfortunately, there aren't any images of Leslie Mann (or Chris Hemsworth, damn), though I get the sneaking suspicion that Mann will totally match McKinnon's flare for the cartoonish things in life (in the best way possible). This Ghostbuster squad clearly has all of the brains, muscle, and just enough crazy to get the job done and save Manhattan from a ghostly invasion.

Here's everything we can predict about the new Ghostbusters film based on the latest images:

1. Kate McKinnon is A Mad Scientist...

That killer outfit tells me she's not afraid to do the dirty work. I get the sense that she's the one who came up with the proton technology to trap the ghosts.

Then looking at McCarthy, that strut tells us everything — she is here to get the job done. With her reputation and her work on the line, she's not letting any academic naysayers get in her way.

3. Kristen Wiig Will Have a Breaking Point

Wiig looks completely bottled up. Her character perhaps has the most emotional investment in the film since she's the one who was shamed out of her career. Though I doubt she will be as timid as she appears in this image for much of the movie. It's Wiig after all — she'll drop the quiet professor and leap in full on to badass Ghostbuster.

4. McKinnon and McCarthy are Double Trouble

Haters gonna hate, but these two have no time for it! McCarthy and Wiig may have written a book together in the past, but perhaps McKinnon is her more recent partner in crime.

5. Wiig is Going to Save New York

And she seems like New York's unlikeliest hero. She's no bulged-out Batman here to save Gotham. She's a straight-laced brainiac who the world might ignore... but whom the Ghostbusters need desperately. McCarthy might appear to be the ringleader, but I think Wiig is going to be the leading hero.

6. I Cannot Wait For This Movie

Can you blame me?