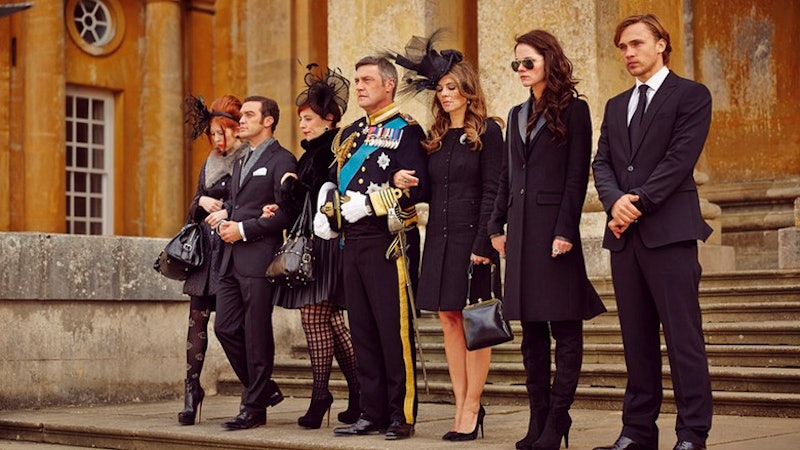 The Netflix gods have sent us another gift from above with their newest Netflix original, The Crown, which details the behind-the-scenes story of Her Majesty Queen Elizabeth II and integral members of British parliament. America just can't seem to get enough of the royal family and, if we learned anything about scripted series about the British monarch from The Royals, we learned that a period drama is hard to pull off well. So let's hope the gang over at Netflix was taking notes and learned these 9 things The Royals taught us not to do when making a drama series about the royal family.

I'm not too worried about Netflix's ability to pull of a successful British monarchy drama. Netflix sure does seem to have their stuff figured out and they are truly taking over the world. First they introduced us to binge watching, then they invented the auto play feature so we don't even have to move our lazy, couch-ridden, pizza-filled bodies to enjoy another episode, and then they started to give us original content.

The Crown is still in pre-production so don't get your royal hopes up too soon. Though we have a while to wait 'til we waste an entire weekend binge-watching The Crown, the show is already stirring up excitement. The casting ball has begun rolling and so far it has swept up Claire Foy as Queen Elizabeth II, Matt Smith as Philip Mountbatten, and John Lithgow as Sir Winston Churchill.

As we await the release of The Crown, let's sit back and consider all of the things that could (and did) go wrong in a British monarchy drama, courtesy of E!'s first scripted series, The Royals.

Give Us A Queen Who Isn't a Sadist

With The Royals, E! seems to be trying to pull off the whole villain-with-redeeming-qualities thing and it just straight up doesn't work. Queen Helena is actually the worst. I am sure we can count on The Crown to give us a far more likable Queen.

I highly doubt the King of England is ever allowed to just wander around all by his lonesome in the dark of the English night. The Royals was just setting up King Simon for an assassination attempt. I like to think that if there are any murderous plots within a monarchy that they'd be a little more sophisticated and devilish. Let's see you set the stakes high in the royal murda business, The Crown.

Seriously, some of these accents on The Royals are bogus. It's really hard to be immersed in a period drama if you're constantly being reminded that you're watching an actor pretending to be British.

If You're Going to Give Us a 'Token American,' Do It In A Less Contrived Manner

Ophelia is the worst on The Royals. They try so hard to make her the sweet, good girl who always surprises people with her wild spirit and quirky American boldness but she just comes off as a girl who tries way too hard and has no idea who she really is. It's kind of ironic that the American character on The Royals is one of the tritest characters on the show. Dear The Crown: if you have any Americans in your series, I trust that they will be better written.

Do you remember when you first started drinking alcohol and there were those people who liked to brag about it all the time to make themselves seem cool? You know, the people who would be like, "Ohhh man, I got soooo wasted last night. I had like twelve shots of tequila and I was HAMMERED." The drug use on The Royals feels kind of like that. All of the younger characters are like, "LOOK AT US WE DO SO MUCH COKE. WE ARE SO REBELLIOUS. YAY DRUGS!" I hope if any of the characters on The Crown indulge in any contraband substances, they do it with a bit more aplomb.

Though The Crown is historically-based and thus probably won't try any half-thought out stunts like a plotline where the King wants to abolish the monarchy, I still think it needs to be said. I'm sorry but I don't know who King Simon thinks he is. He's all, "Well, my son's probably doing a line of coke off a drunk girl's butt cheek right now while my daughter is off giving a BJ in a club bathroom. Those darn kids are tarnishing the throne. What's a King to do? I know! ABOLISH THE MONARCHY!" Slow your roll there, King.

The two red-headed cousins on The Royals are absolutely the worst. I get that the point of them is to remind us how illogical it is to make power a matter of geneaology but come on. You can do better.

Use Your Montage Sequences Sparingly

I can only handle so many montage sequences of star-crossed lovers making out to The Lumineers or whatever. I get there will always be drama and romance but not every single moment requires a montage set to an indie-rock song.