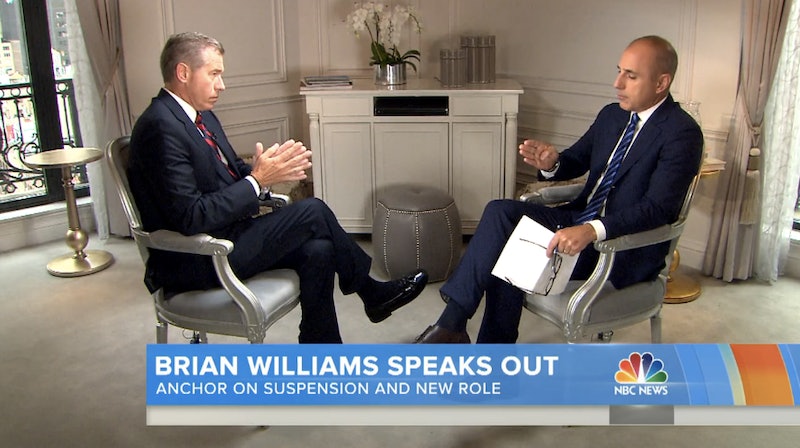 In his first public discussion about his fabricated stories, Brian Williams appeared on TODAY Friday in a pre-taped interview to apologize and reassure the public that he could be trusted from now on. Unfortunately, the apology was pretty hard to decipher among the many vague statements and inconsistencies; many viewers believed the prerecorded interview with TODAY's Matt Lauer to not be direct or serious enough.

The NBC Nightly News anchor was initially suspended in February when dramatic stories he told about being shot at in a chopper turned out to be false. Williams apologized on air, and NBC begun an investigation to find the truth about the events Williams described and any other possible falsehoods. Much of the journalism and military communities criticized Williams harshly.

Now, Lester Holt will take over as lead anchor of the Nightly News, and Williams will report breaking news and special events for MSNBC, where he worked before landing the prestigious anchor job. Although Williams admitted his new position was not his first choice, as he wanted his old job back, he said of Holt, "No one is more deserving. This game came in under the worst circumstances and has upheld everything great about the place and the broadcast. It's Lester's job."

Although Williams expressed his gratitude at being offered a second chance, much of the viewing audience still did not trust him, and condemned Lauer's inability to get a straight answer out of him. Here are eight things Williams did not really answer in his TODAY interview.

Did He Have Any Doubts About Things He Said Over The Years?

Lauer asked Williams whether he'd had doubts throughout his career. Williams responded with:

I was reading newspaper stories, not liking the person I was reading about. I would have given anything to get to the end of the story and have it be someone else. But it was about me. These statements I made, I own this. I own up to this. I had to go through and see and try to figure out how it happened.

While personal responsibility is necessary here, this statement certainly did not answer Lauer's question. Has Williams made any false statements the public doesn't know about? Are there facts from previous stories that Williams could have falsified, intentionally or not? We still don't know.

Lauer wanted to know whether Williams consciously lied or was simply inattentive, bringing up Williams' story of a heroic soldier who assisted in a dangerous helicopter mission. He asked the anchor whether he knew that this story was not true. Williams said:

This response has left us with more questions than answers. Williams said that he told an untruth, that he was preoccupied with being the smartest and quickest anchor. But now he says he was not trying to mislead people? Also, criticizing the public's inability to accept apologies might not be the best strategy when trying to apologize.

Did He Know That When He Went On The Nightly News That He Was Telling A Story That Was Not True?

At least Lauer pushed Williams for this followup question, spoken plainly and directly. Although Williams gave a hard "no," his response is unclear about how exactly he came to be duped into telling an untrue story:

No. It came from a bad place. It came from a sloppy choice of words. I told stories that were not true over the years, looking back. It is very clear. I never intended to. It got mixed up. It got turned around in my mind.

How Did He Misremember Events That He Lived Through?

Lauer told Williams that he worried that people who saw the apologies would wonder how he could misremember facts that he supposedly lived through. Williams said:

I see why people would say that. I understand it. This came from clearly a bad place, a bad urge inside me. This was clearly ego-driven. The desire to better my role in a story I was already in. That's what I have been tearing apart and unpacking and analyzing.

Again, this leaves us with more questions than answers. If he didn't intend to mislead anyone, how did this all come from his ego? If he only mixed up his memories, why did this come from a "bad place?" The fact that he has been analyzing all of this doesn't make him sound any better.

Why Wouldn't He Admit That He Lied In His Apology?

Williams' apology on the Nightly News said that he misremembered the facts. Lauer wanted to know if the celebrity anchor gave any thought to saying that he lied on air.

Williams is still leaving a lot of people scratching their heads. He didn't lie, but his ego is to blame? He talks about his ego as if it were a little monster controlling his every move while he, the victim, is powerless to tell the truth.

Was Trauma A Factor?

One issue not touched on by Lauer or Williams in the TODAY interview was whether the traumatic circumstances were a factor in Williams misremembering. Dangerous circumstances can affect the memories of someone who is not trained in this kind of environment, but Williams never volunteered to say whether his falsities were the broken memories of a scared man or the lies of a reporter trying to be an action star.

Is There Anyone Else Who Deserves An Apology?

Although Williams' apology to the viewer was pretty sparse and unclear, he did not say anything about the other people who deserve an apology and might have been offended by his words: soldiers and journalists who are actually being shot at. Williams' attempt to romanticize foreign conflict is an insult to those who are risking their lives to protect and inform the American public.

What Other Lies Has He Told?

Lauer gave Williams the opportunity to tell any other untruths he might have told on the air. NBC conducted an investigation that delved into other incorrect facts, and Williams said he has seen those results. He had the chance to bring up any other incidents and said:

I would like to take this opportunity to say that what has happened in the past has identified and torn apart by me and has been fixed, has been dealt with. Going forward, there are going to be different rules of the road. I know why people feel the way they do. I get this. I'm responsible for this. I am sorry for what happened. I am different as a result. I expect to be held to a different standard.

This is the third time Williams acknowledged the views of the public, but he still hasn't answered whether why there is any substantial reason to believe that those feelings are not justified. He will have to understand if, based on this interview, we don't believe this has been "fixed." There is too much maneuvering here for the truth.

More like this
18 Unanswered Questions From 'The Hills' That Still Haunt Us Today
By Ivana Rihter
The Most Powerful Photos From The Weekend’s Abortion Rights Protests
By Melanie Mignucci
Is Austin Butler Really Singing in 'Elvis'?
By Arya Roshanian
Police Shove 'Full House' Star Jodie Sweetin At An Abortion Rights Protest
By Radhika Menon
Get Even More From Bustle — Sign Up For The Newsletter