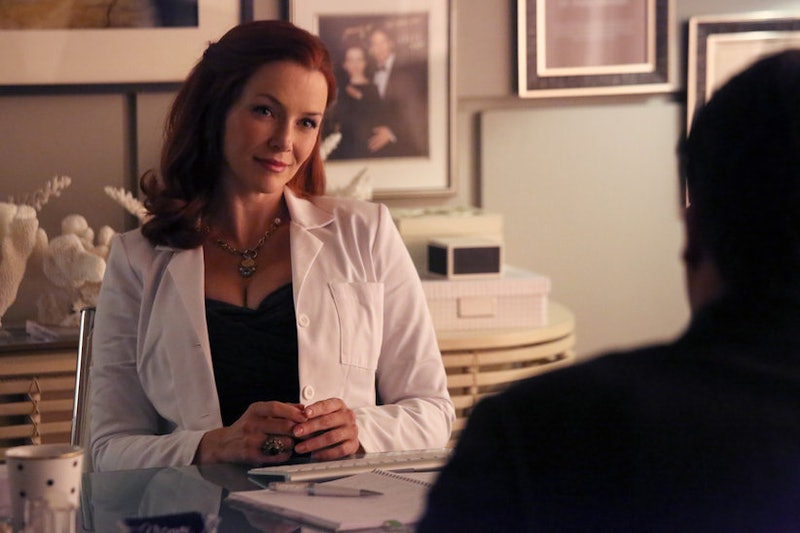 It finally happened. Something finally went down on Castle I did not understand. I suppose that's bound to occur when you skip the first few seasons of a series. During Monday night's episode, Castle and Beckett suddenly lost their minds over some guy named Jerry Tyson and kept saying "three ex kay" and I thought I missed part of the episode. Nope, I just missed a majority of the series. No big, no big. I was able to piece together that Jerry Tyson/3XK is a serial killer who might be dead. I also got the impression that Jerry Tyson/3XK is a recurring show villain. Oof. Where's a lighthearted Linus the lion subplot when you need it most?

Okay. The case: Two victims are found on two separate occasions. Both are found hanging by fishing wire at the docks. One victim was cut to look like Lanie. The other looked like Esposito and was trained to sound like Esposito. (No, they don't figure this out simply by looking at the corpse. That'd be insane. They get that info from his speech therapist.) Cripes. This is some L.A. Confidential shit. Lanie and Esposito are incredibly freaked out because, uh, it's pretty horrifying/bonkers/creepy.

Who's the link between victims Pam and Daniel? A plastic surgeon. Dr. Nieman Lanie-fied Pam and had a "purely physical" relationship with Daniel. She is fairly blasé about the deaths of Pam and Daniel. I don't trust this Dr. Nieman.

Dr. Nieman tells Beckett that she has "an amazing face." Oh, I'm sorry, Dr. Nieman. Is your maiden name Captain Obvious? Because DUH! Beckett is perfect. Castle lives for a compliment, so he fishes for one from this seemingly evil plastic surgeon. Dr. Nieman tells Castle he has "amazing potential." This answer really irks Castle, because Castle. Dr. Nieman is super sketchy during their questioning. Nothing but bad vibes oozing from Dr. Nieman. If my TV had Smell-O-Vision, my living room would reek of musky EVIL every time Dr. Nieman was onscreen.

Well, the detectives plus Castle do some sleuthing and figure out that Security Guard Carl from the docks is the man behind the murders. They also realize a bunch of files went missing from the precinct. Which files? The 3XK files. Who took them? Fakesposito. Really? Why? Why would Security Guard Carl go through all of that trouble to steal the information about Jerry Tyson? Does he know Jerry Tyson? Is he working with Jerry Tyson? WHAT IS SECURITY GUARD CARL'S STORY?

Well, Security Guard Carl acts like a real weirdo and confesses to the fishing wire murders. And then Castle/Beckett/everyone is like, "BUT WHAT ABOUT JERRY TYSON?!" and Security Guard Carl is like, "Not working with him, suckers," and I'm like, "Can someone fill me in?" and then everyone who isn't Castle is like, "We've got to drop the Jerry Tyson thing, STAT."

BUT THEN! They discover Dr. Nieman was Tyson's plastic surgeon in prison (I guess he needed reconstructive surgery? My head hurts), and they jump to the conclusion that Dr. Nieman and Tyson were totally BF/GF. AND THEN!!! They rush to Dr. Nieman's office and BAM! The office is completely empty. Dr. Nieman is gone without a trace. Except for a pen. A pen with a USB flash drive. Castle and Beckett pop the USB flash drive into the computer. It plays a song. The song seemingly turns Beckett and Castle into robots who move in slow-motion and make bizarre faces at one another. I don't understand what they're doing. It's terrifying.

So Dr. Nieman is probably working with/dating a serial killer who has been tormenting Castle for multiple seasons? Am I correct in assuming this won't be the last we see of Dr. Demon, er, Nieman? She and Tyson will pop up again when we least expect it. Maybe she'll have given herself a brand new face to conceal her identity. But it won't matter. I'll own a Smell-O-Vision TV by then. I'll know it's her as soon as I catch a whiff of her evil, evil odor.