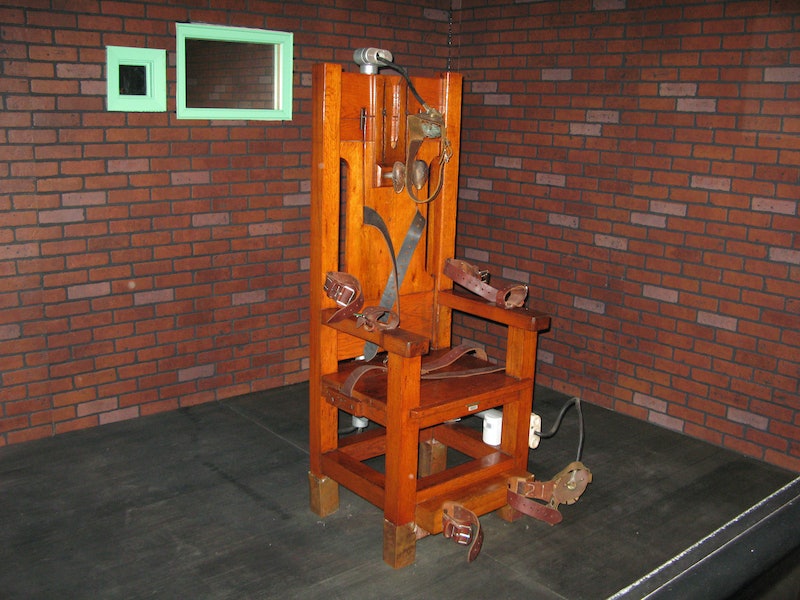 During his first court appearance Friday, Dylann Roof confessed to killing nine people during a prayer session in the historic Emanuel African Methodist Episcopal Church. Roof allegedly told investigators he did it to start a race war, according to law officials who spoke to CNN. South Carolina Gov. Nikki Haley has already requested that the state give him the death penalty if he is convicted and prosecutors seek that sentence. But how would Roof be executed if he's sentenced to the death penalty? The last person South Carolina executed was Jeffrey Motts in 2011, for strangling one of his prison cellmates.

Motts was executed by lethal injection, and, according to Death Penalty USA, that's the method the state has used most often since the mid 1990s. South Carolina did execute two people by electrocution in 2008 and 2004. Given the type of execution methods South Carolina has used most often recently, Roof, if he's convicted for the nine murders and sentenced to death, would most likely die by lethal injection.

Roof sat in the church for nearly an hour before standing up and telling people he had come "to shoot black people," according to survivors' accounts. The FBI said it is investigating the shooting as a hate crime. Some states have their own state-regulated hate crime enhancements, which enhance the penalties or sentences for hate crimes. Unfortunately, South Carolina is not one of those states, despite repeated attempts to pass hate crime legislation in the state, according to Al Jazeera. So, the FBI can assist in the investigation and prosecution of the crime as a hate crime, but its status as a hate crime won't actually increase Roof's sentence in South Carolina.

On NBC's Today Show, Haley, a Republican, said Roof's act was an "absolute hate crime" that has "devastated the state," according to Bloomberg:

Without question, we... absolutely will want him to have the death penalty. This is the worst hate that I’ve seen and that the country has seen in a long time.

Two South Carolina lawmakers also said Friday that they would renew their attempts to pass hate crime legislation in South Carolina, according to The Post and Courier. Rep. Seth Whipper, a Democrat from North Charleston, has tried unsuccessfully for more than 15 years to a bill through the legislature that would increase penalties for anyone who commits a crime motivated by race, religion, color, sex, age, national origin or sexual orientation.

Whipper told the Post and Courier that resistance to hate crime bills usually comes from state House conservatives. Rep. Wendell Gilliard, a Democrat from Charleston, said he won't give up the fight even if there's resistance from conservatives:

I don’t care if they call it a knee-jerk reaction. I got to do what I got to do.

If hate crime legislation is finally passed in South Carolina during the 2016 legislative session, it could affect Roof's sentence, assuming he's convicted and sentenced once a potential bill is passed.