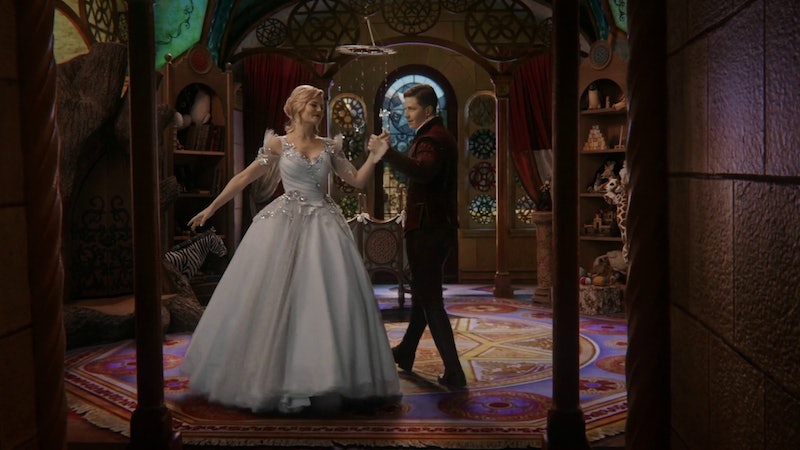 Honestly, you shouldn't think about any of the family relationships on Once Upon A Time for too long. There are enough time-traveling parents, immortal grandparents to make your head spin faster than a portal to another realm. However, one of my favorite fathers on Once Upon A Time is Prince Charming, also known as David Nolan. His relationship with Emma Swan is actually one of my favorite parent/child relationships on television, whether they're partners in sheriff work or building a crib. In honor of Father's Day, I tip my hat to this bizarre dynamic!

I think what I like about it so much is that it could so easily be weird and yet they make it work. The characters are around the same "age" and Jennifer Morrison is actually a little bit older than Josh Dallas, but they've nailed that daddy/daughter chemistry. It reminds me of doing theatre in college, oddly enough. When everyone doing a play or a musical is relatively the same age, you end up playing each other's parents and it creates a similar vibe. It also reminds me a little bit of being a counselor, residence advisor, or even a babysitter for an older child. Any time in your life that you try on the parenting hat and attempt to mentor someone that you have not known since birth. Families come in all shapes and sizes and Once Upon A Time uses magic and legend to showcase that.

Because one of David's biggest regrets on Once Upon A Time is that he never got to see Emma grow up. Emma was sent through a portal moments after she was born, and didn't meet her parents until she was almost 30. In Storybrooke, David was originally in a coma and not even really able to be a grandfather to Henry when that kid needed him most. He can try and mentor her, but they have the same amount of life experience — which is a major conflict between Emma and her parents on the show. They are peers, not parents, and David often feels as though he's failed his own daughter.

Scary dream aside, they really are the best. Even the actors like to carry on this relationship and are super cute about it. Jennifer Morrison once tweeted in response to a fan that she is "100% daddy's girl on set," to which Dallas replied "That's my girl!" How adorable is that? I'm sure it doesn't hurt that Josh Dallas and Ginnifer Goodwin are married (and parents) in real life as well.

It's a testament to Once Upon A Time that once they realized they were going to have their protagonist meet her parents when she was their age, they really went with the idea. They committed. Embarrassing moments and all!

Another thing that I like about Charming is that he's protective of Emma but respectful of her choices. He's a flawed character in other ways, but definitely a Cool Dad. I love the fact that he took the time to get used to Hook. He so easily could have just hated him out of some stereotypical spite. Now, he's so comfortable with the idea that he's just casually making fun of Emma.

You can make Dad jokes at any age, folks! Prince Charming may be making up for lost time on Once but he, Snow, Emma, Henry, and Baby Neal are a great team.