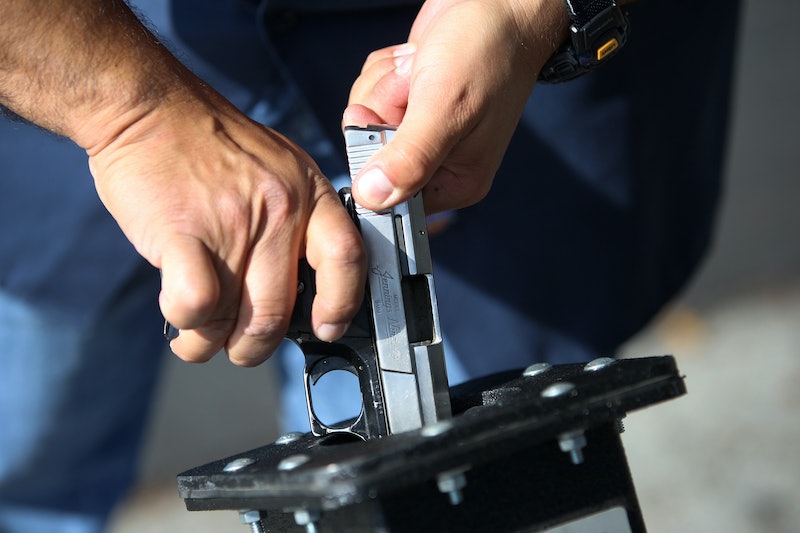 Each time a mass shooting rocks America, the debate over gun control — what can be done to prevent another tragedy happening, what can't, and what should — rears its head. And after that, gun proponents insist that gun control isn't the way to go. The mass shooting in Charleston, North Carolina saw Jon Stewart note in an emotional dialogue Thursday night: "We are steeped in [firearm] culture in this country, and we refuse to recognize it." Every time, opponents of gun regulations bring out their same arguments, some of which are based on logic and evidence. Some are not.

For example, Charles Cotton wrote in a blog post this week that the Charleston shooting could have been prevented if Rev. Clementa Pinckney hadn't been an ardent supporter of gun control. This is not a response based in any sort of logic, obviously.

Dylann Roof is suspected of shooting and killing nine people in the Emanuel African Methodist Episcopal Church. Eight died on the scene, the last in a hospital. Roof reportedly wanted to start a race war when he allegedly open fired on a Bible study group. According to CNN, who spoke to law enforcement, Roof has confessed to all nine killings.

Many politicians have spoken out about gun control in response to this violence. President Obama expressed his condolences and his support of gun control laws in an emotional press conference. Hillary Clinton, who was in South Carolina at the time of the shooting, also took the time to push for action on guns. Meanwhile, opponents of gun control have had to tread carefully in this time of grief. Here are the eight craziest — and yet often invoked — arguments against gun safety laws:

"No Law-Abiding American Should Not Be Forced To Face Evil With Empty Hands."

The National Rifle Association makes this statement on its website.

The word "evil" raises alarm bells. This kind of attitude paints gun control as a simple, black-and-white issue, as if there are only "good guys" and "bad guys."

Guns Are Less Dangerous Than Cars

Gun-toters and organizations like the NRA are quick to say that gun control is unnecessary because guns kill fewer people than car accidents. That's about as relevant as saying guns kill fewer people than lightening strikes or buffalo attacks (which is not true, by the way). Even if gun fanatics wish to keep using that argument, it might not even be true soon. According to the National Highway Traffic Safety Administration, 32,479 people were killed in 2011 from car crashes, but firearms killed 33,636 people in 2011, according to the Centers for Disease Control.

Gun Control Is Enacted To Make Us Easy Targets

The site Guns 'N' Freedom argues that gun control was originally a way for the Ku Klux Klan to easily attack black people. One blogger even suggested that many shootings in the black community, such as the Charleston shooting and the Birmingham bombing of 1963, would not have been so brutal had gun control not existed. No one seems to mention how those perpetrators got access to guns.

There's No Evidence To Suggest Large Magazines Are Linked To Violence

One way to control gun use is by creating bans on magazines that hold more than 10 rounds of ammunition. Opponents argue that these bans are not linked to reduced gun violence. However, there don't seem to be any benefits to large magazines. They allow shooters to kill more people more quickly, and if a hunter needs more than 10 rounds to kill one animal, he or she should probably choose a new hobby.

Many gun control opponents argue that if prohibition didn't stop alcohol, gun control won't stop guns. While it's true that Americans usually don't respond well to bans on things they have been using their whole lives, there are more sophisticated approaches to gun control rather than just banning them altogether. Background checks and limits on magazine capabilities make guns safer without hindering their use to people who use them for sports or self-defense purposes.

Assault Rifles Are Useful For Hunting And Self-Defense

Assault rifles, which are high-powered weapons designed for warfare, can technically be used for hunting or self-defense. However, according to The Daily Caller, they aren't really good for either. The caliber is too weak for hunting, and they are dangerous for home defense because the ammunition goes through walls, therefore endangering innocent lives.

We Can't Trust The Government To Protect Us

With government scandals popping up seemingly all the time, some opponents of gun control argue that the government should not be trusted to protect the people. However, if a foreign nation attacked on U.S. soil, would NRA members really be able to do anything? The average citizen with a pistol knows nothing about how to stop a terrorist or foreign military.

Background Checks Don't Reveal What Someone Is Capable Of

It's true. Not everyone who shoots innocent people has a history of violence or mental instability. Sometimes, for some unknowable reason, a person with no history buys a gun and then kills someone with it. However, most mass shooters have a history of violence, and 23 percent have a documented psychiatric history, according to a study published by the National Institute of Health. Roof had such a criminal history, according to The Daily Beast.

There's evidence on both sides on what does or does not cause gun-related fatalities. Hopefully, members of Congress will make the right choices when it comes to gun control, and unfounded arguments will stop being part of the dialogue.