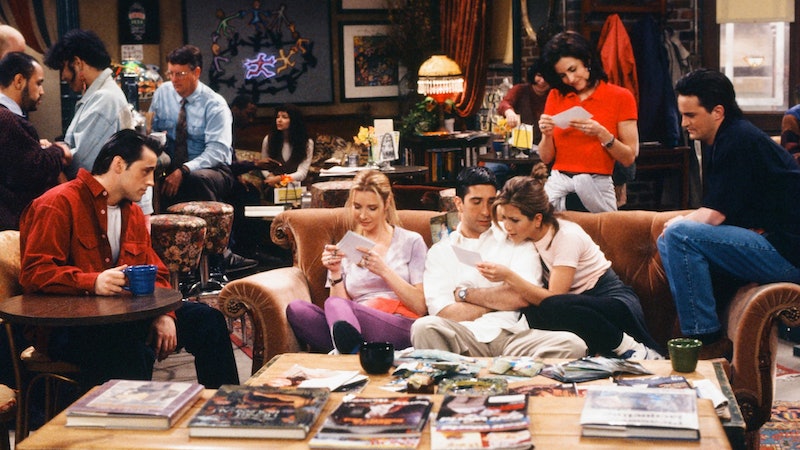 Two of the best series of the '90s — and forever — both involve some of the greatest friendships around. One even has it in the name. Friends and the Harry Potter series will both go down in the history books for their devoted fans and their timelessness. People got in line for the newest Harry Potter book, and probably later that same day, got their hair cut into "The Rachel." What a time to be alive, right? Right.

Harry Potter was magical because, like, magic, and Friends was so magical that it gave us unrealistic expectations for how our 20s would play out. But what if they combined? Sometimes, you just wonder about these things. What if Rachel went to Hogwarts? Imagine how funny that would be! It would be too many things I love at once. So I got to thinking, what if the Friends group really did go to Hogwarts? What houses would they be in? They'd be split up, sure, but it would definitely still be amazing.

I'm no sorting hat, but I decided to play one just for a little while. Here's what would happen if the six friends (and of course Gunther and Janice) went to Hogwarts and got sorted by the sorting hat.

I mean, he is the most (adorably, let's just get that out of the way) nerdy one of the group. He loves science and dinosaurs and is willing police the library where his book is. Is there really any doubt where he would end up? Move over Cho Chang, Ross Gellar is here. Though surely it would pain him being separated from Rachel.

The girl called off a wedding, declared her independence, and started completely over in a new city — that takes the courage and confidence of a true Gryffindor. Not to mention that she then went from being a waitress to a corporate fashion guru with an assistant and a job offer in Paris! The sorting hat would waste no time placing her in Gryffindor, right next to Harry and friends, who I'm sure would be there for her, too.

It would be hard for the sorting hat to decide where to put Phoebe. She's crazy in the best way, always up for having fun, but Phoebe lived on the streets, she's way smarter than she lets on, and basically? She's seen some things and knows how to defend herself. When it comes down to it, Phoebe would be in Slytherin for her cunning brain, not for the horcrux-making thing.

Wait, is this even a question?

No one is more there for his friends than Chandler, OK? He supported Joey for years, he could always lighten the mood with a joke, and he married Monica, which you know couldn't have been easy. He's an all around good guy, like most Gryffindors are known to be, though he is known to let out his inner Hufflepuff side, too, because, hello, he lived with Joey for how long?

She was a good friend, most of the time, don't get me wrong. Monica was always the hostess, after all. But she was competitive and selfish in a way the rest of the group just wasn't. That time they all fought over lottery tickets, Monica was the only one to say money is more important than friendship. That says a lot about a person, and honestly, I'm not sure she would be able to turn down opportunity to make a horcrux.

OH. MY. GOD. Just imagine these two running around the halls of Hogwarts. Hufflepuff is the only likely choice for them, if you think about it. Not overly studious or brave, but hysterical and 100 percent devoted to the people they love.

I think I hear the Hogwarts Express coming for these eight, can't you?

More like this
'Friends' Creator Marta Kauffman Opened Up About Misgendering A Guest Character
By Grace Wehniainen
“The Door Is Always Open” For Another 'Breaking Bad' Spin-Off, Says AMC Boss
By El Hunt
16 Novels That Paint A Realistic Portrait Of Abortion
By K.W. Colyard
At 14, Jenny Han Wrote Rom-Coms About Her Friends & Fan Mail To Leo DiCaprio
By Alyssa Lapid
Get Even More From Bustle — Sign Up For The Newsletter