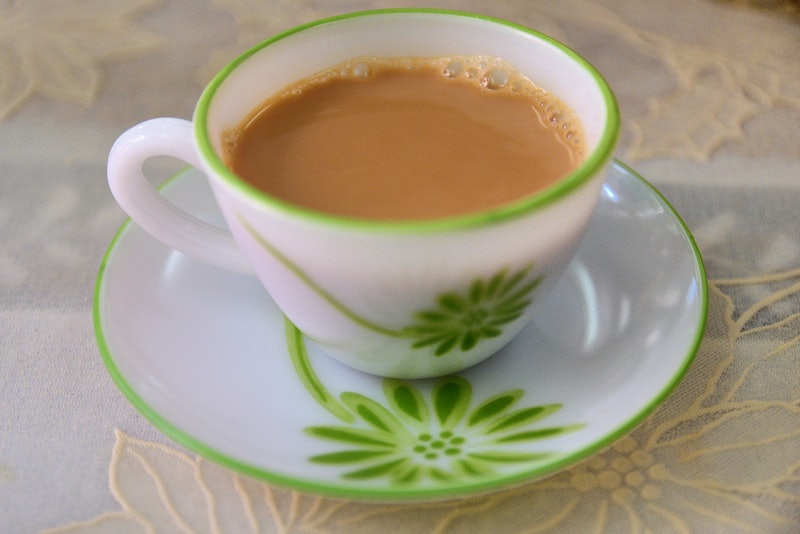 While the hallowed coffee break is a much-loved occasion (especially during the middle of a rough work day), there's something to be said for teatime as well. And hey, guess what? Now we know exactly how to make the perfect cup of tea, thanks to Anglophenia's latest video — titled, appropriately, “How to Make Tea the British Way.” Nobody does tea quite like the Brits do.

Angolphenia host Kate Arnell perviously walked us through exactly why tea is so big in the UK in a hefty, history-driven episode of the delightful webseries. But what that particular episode didn't cover, though, is actually how to make a good cup of tea. So that's the ground they're covering in this latest episode, and you guys? I think I need to make a cuppa myself now.

Although Arnell does mention a few different types of tea, including herbal and green, the instructions she provides are most useful for making a black tea blend like English Breakfast tea. These blends tend to go well with milk and sugar, and they're great for dunking a biscuit or two into. Can you cut corners when it comes to making your beverage of choice? Sure, as long as you don't mind ending up with a subpar cup of tea. But cutting corners won't actually save you much time, so why not go all out and do it properly?

Here, according to Arnell, is how it's done:

The key here is to make sure you boil it fresh — and for the love of all that is holy, don't just stick a mug of water in the microwave until it's sort of warmish. Use a kettle; either a stove top one or an electric one will work, but I'm personally of the opinion that fast-boiling electric kettles are a gift from above, so… yeah. You don't even need one with any bells and whistle — I've had the same $15 Proctor Silex kettle for almost 10 years, and it's still going strong. Cheap and durable? Heck yes.

Generally two to five minutes of steeping time is a good window to aim for, depending on the type of tea and how strong you like it. Be careful, though — steeping tea for two long has a tendency to make it go bitter. Also, if you really want to be a stickler, make sure your water is the right temperature before you start steeping.

Most Brits take milk with their tea, although it's long been debated whether you should add it to your cup before your tea is poured, or after. According to Arnell, though, studies have been done that settled the debate once and for all: If you brewed your tea in the cup itself, add the milk after it's done steeping (as seen above)…

...But if you brewed in a pot, pour the milk into your cup first, then add the already-brewed tea as seen here.

Note, though, though some types of tea should not be consumed with milk. Earl Grey, for example, is traditionally served milkless; instead, you might add a squeeze of lemon. However, it's also worth pointing out that Earl Grey can be made into a particularly delicious tea latte — as long as you don't mind breaking that no-milk rule.

Sugar? One, two, or three? How about a biscuit? Chocolate or not? It's your call — make your tea break exactly what you need it to be!

Check out the full episode below for much, much more. Now if you'll excuse me, I've got to go put the kettle on: