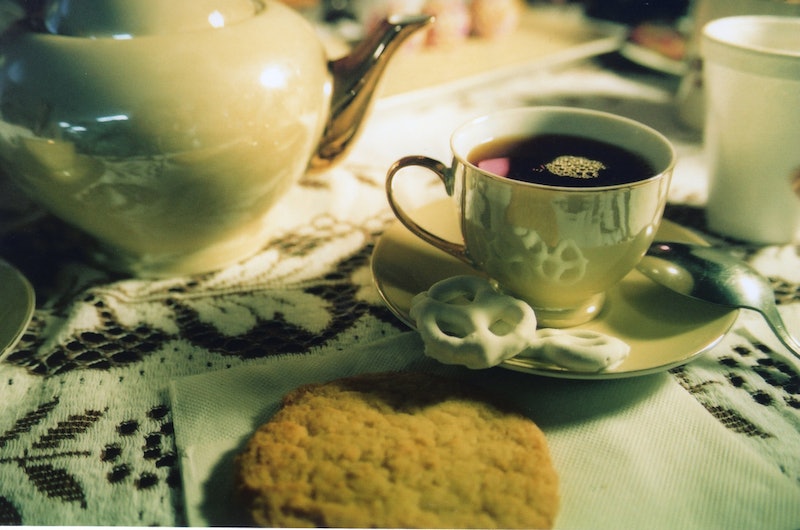 If it sounds like I'm biased, it's because I am: Tea is better than coffee. I'm not just saying that because – full disclosure – I'm drinking a cup of tea right now. I'm saying it because I feel, as a person who has been on both sides of the caffeine tracks, that I have the authority to defend tea, aka, the nectar of the gods. See, last summer after my long love affair with tea, I cheated. I'm not proud to admit that over the course of several Fridays, I used the free office coffee machine at my internship to jolt myself back into consciousness, sometimes more than once in a day. But you see, it's true what they say: coffee drinkers and tea drinkers are different people. And as the addiction to coffee took root and start to grow, I didn't like the new person I was becoming. One day I looked at my murky reflection in that mug and decided it was time to quit coffee and never look back.

I write to you now after three blissful months of post-coffee recovery. I have a cup of tea every morning, another cup every night, and I sleep like a baby. Like a smug and satisfied baby. Because I am a tea drinker, and tea drinkers have logic on their side that coffee drinkers can never dream of:

Nobody Ever Has "Coffee" Parties

Tea is so great that it inspires people to actually clean their houses (gasp) and invite all their friends over to enjoy it with them. Not only that, but they make itty bitty snacks to go with it. Do you know what tastes good with tea? Everything. I can't tell you how many times in college I had tea parties just so I could have an excuse to empty everything out of the pantry and shovel it in my mouth. But let's be real, if I'd invited everyone to a coffee party the only ones in attendance would be me, myself and I.

Tea Can Boost Your Exercise Endurance

Someday in the very distant future, I'm going to exercise again, and when that day comes, I'm probably going to be really fierce at it. Antioxidants in green tea have the ability to increase muscle capacity. As far as I know, coffee doesn't grant you super powers like that. So watch out, guys, because that female Thor everyone's been talking about? Obviously going to be me.

Who Doesn't Enjoy The Odd Satisfaction of Brewing Tea?

Seriously, just look at it go.

And the only way to get rid of those ugly coffee stains is to quit drinking coffee altogether. MWAHAHAHAHA. JOIN US, COFFEE DRINKERS.

You Can Pretend To Be British

That is, unless you already are British, in which case, carry on.

Tea Is Actually Eco-Friendlier Than Coffee

A cup of tea leaves a significantly smaller carbon footprint than a cup of coffee. Tea is also cheaper and wastes fewer resources in trade. So suck it. Slowly. So you don't burn the roof of your mouth.

When's the last time someone cooed over your Keurig? That's what I thought.

I'm not going to say that if Lady Gaga jumped off a bridge then I would also jump, because those are the kind of borderline-obsessive hero worship thoughts you keep to yourself. But if tea has the Lady Gaga seal of approval, I can't imagine anyone can argue against it.

One of the best parts of tea is that, yes, it's less caffeinated than coffee. Which means it has the power to bring you to semi-functional human being without making you look like you just escaped Arkham Asylum.

Tea Allows You To Contemplate The Meaning Of Life

Or at least I assume it does a better job of it than coffee does. Whenever someone is Instagramming a picture of themselves with a blank notebook page staring out at the rain, they've always got a cup of tea in their hand. Tea – not coffee. The only wisdom I've ever achieved while drinking coffee is forgetting where I parked my car.

Tea Can Predict The Future

Say what you will about Professor Trelawney, but in some roundabout way or another, all of her tea leaf predictions came true. And since Harry Potter obviously happened in real life, that makes tea a much better predictor of your life outcomes than coffee. When's the last time y'all read coffee leaves, huh?

You Can Discover The Joy Of Eating Crumpets

I'm not even British and I know that tea and crumpets are things that always go together. I tried my first crumpet over the summer and I might have cried a little thinking about the twenty-something years that I went without ever knowing the joy of tasting one. And I know people eat dessert with their coffee all the time, but I feel like enjoying a crumpet with coffee would be downright criminal. An offense against nature. Tea and crumpets for life!

There is no actual scientific proof of this aside from this article, in which I employ a lot of sass. Come at me, coffee people.