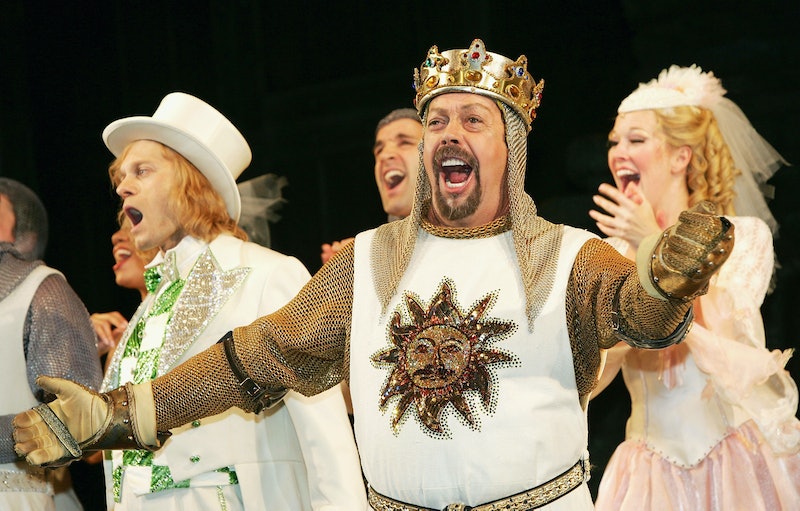 Once Upon A Time is always finding clever ways to twist classic fairy tales and legends to show both how the familiar stories came to be told and how things "really" were. As a Neverland fan, I was devastated to see Peter Pan depicted as a villain, yet it was still fascinating in the context of the ABC series. Based on some recent casting notices for Season 5, I have a sneaking suspicion that they're doing it again — will King Arthur be a villain on Once Upon A Time?

We learned at the end of last season that the wizard Merlin is the key to stopping the Dark One curse and saving Emma from the evil inside of her. This presumably means that the gang is off to Camelot. Besides the wizard himself, ABC is also casting Queen Guinevere and King Arthur. According to TV Line, Once Upon A Time is looking for a young middle-aged British actor to play Arthur and describes the character this way:

...A “good and just ruler” who, beneath the surface, “is a master manipulator who can carry a grudge to the grave, and maybe beyond.” He harbors an “eternal burning love” for Guinevere that can lean toward being a bit…controlling.

This is a major red flag to me. I've never heard the words "master manipulator," "grudge," and "controlling" used to describe a hero, have you? What does carrying a grudge beyond the grave even mean? This definitely does not bode well for Camelot on Once Upon A Time.

I'm also already skeeved out by King Arthur's relationship with Guinevere. What exactly do they mean by controlling? Is Once Upon A Time going tell a domestic abuse story with these characters? When we met Lancelot a few seasons ago, he spoke of a woman he loved and it seemed as if something bad had happened. Whatever it was, he was banished from his kingdom. Those familiar with the legend of King Arthur know that the true love story is the adulterous affair between Lancelot and Guinevere. If this is going where I think its going, we may be getting a villain who doesn't use magic to achieve his evil ends. King Arthur might just be a bad person. Once Upon A Time may be taking that part of the story to a dark place, but if Arthur is indeed presented as a villain, I hope Guinevere will eventually get the happy ending she deserves. That's what we love about OUAT!

To be honest, I am witched out after the Snow Queen, then the Queens of Darkness, and then the return of Zelena in Season 4. Considering how most of the recent villains on OUAT have been badass ladies, I wouldn't be surprised if Season 5 mixes it up with an evil male character this time around. Plus, now that Rumplestiltskin is no longer the Dark One, I have a feeling that he'll be fighting the good fight too. Even Captain Hook couldn't stay bad forever. Turning another known hero like King Arthur into a villain on Once Upon A Time would be an excellent twist.