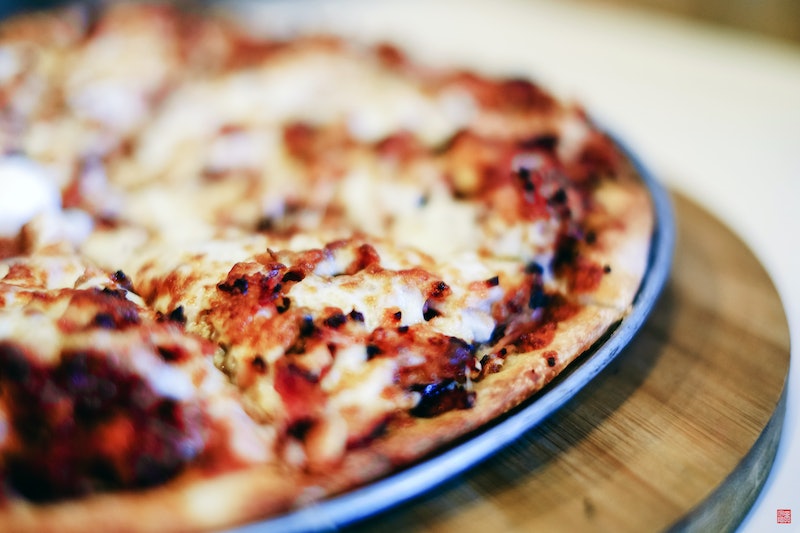 Looking for the perfect pizza? Give your delivery guy a break — these pizza tricks are everything you need to know to create the ultimate pie at home. The first documented appearance of the word "pizza" appears in the year 997, in reference to the 12 pizzas the Bishop of Gaeta was supposed to receive every Christmas and Easter. I wonder if the Bishop was more partial to pepperoni, pineapple, and jalapeño, or if he was more of a cheese man.

In reality, the Bishop's 12 pizzas were ordered (can you believe the first ever documented pizzas were delivered?) before the introduction of the tomato in Italy, so things were a little different, to say the least. Over the last 1,018 years, chefs have been taking liberties with the original concept and making bigger, saucier, and more creative dishes all under the wonderful umbrella of pizza.

I used to think that pizza was whatever the Durham, North Carolina Papa John's would deliver to my dorm room on my meal plan, and that great pizza was that dollar slice I got at a 24-hour place near the Beacon Theater in New York City when I was 16. That kind of thinking is the same as suggesting that all wine is Trader Joe's Two-Buck Chuck. There is absolutely a time and place for ol' Chuck, but by no means is he representative of the depth and breadth of wine in general. Pizza as a dish is as versatile as your imagination will allow it to be.

Here you'll find a breakdown of tips and tricks for making pizza (and pizza's awesome little cousins) at home!

The foundation of any pizza is its crust. Let's assume for a moment that you want to make a pizza with a traditional bread crust, and your overachieving DIY nature is telling you that you should probably make the whole shebang from scratch. What can you do to ensure that it doesn't come out a blobby, gooey, flavorless mess? According to the good folks over at The Kitchn, this recipe is the only one you need to be fooling around with. And, as with many pizza dough recipes, this one involves a lot of this ball of dough hanging out in various places (the refrigerator and the counter, respectively).

Rest is a necessary step that happens at a couple of different times during the dough-making process. The first rest happens in the refrigerator where your ball of dough will rise as the chemical effects of the yeast occur. The second time (and this is also important to note for everyone who decides to buy a pre-made ball of dough), it needs to be room temperature before you start rolling it out, or it will mock you by shrinking back in as you attempt to stretch it.

Traditional crust can be cooked in the oven or on the grill. The oven is rather self-explanatory as far as making pizza goes — build your pizza, preheat the oven to the temperature appropriate for your recipe, and bake that bad boy.

Grilling pizza takes a little bit more improvisational skill. For starters, you have to brush the dough with olive oil on one side, and place oil-side-down on the open grill before you add any toppings. The first side that you grill will ultimately end up as your topping-side.

You can find incredibly detailed directions for grilling your pizza here, including the pro-tip of physically having your toppings outside near the grill ready to plop onto your half-grilled dough.

If you're not into the idea of making a dough or dealing with the enormous mess generated by rolling it out, there are loads of alternatives to a traditional crust. My favorite alternative crust at the moment is the 12-inch pita round. They fit perfectly on my pizza pan, and they grill wonderfully over indirect heat.

Burrito-sized taco shells, lavash, and sliced bagels also all work quite well if you're baking your pizza in an oven.

My favorite hack in the history of my kitchen is the one where I make fresh and delicious pizza sauce in just five minutes.

You don't have to peel or chop anything to make this sauce thanks to the perfectly proportioned ingredients in the bruschetta. It tastes, in my opinion, SO MUCH more awesome than regular old pre-made pizza sauce, and you'll be able to maintain your imaginary culinary street cred by having your own "signature" sauce.

If the idea of making a pizza when you could easily have one delivered seems a little basic to you, there are an unfathomable number of crazy pizza fusion recipes waiting for you on the Internet.

For example, this pizza dip packs all the glory of a hot slice with none of the drama of burning your crust.

Frankly, that's a pretty solid option for anyone going gluten-free who still wants to indulge in the goodness of pizza.

Thinking about pizza for dessert? This little pretender, aka the fruit pizza, is a sweet treat that imitates the pizza aesthetic while maintaining its desserty integrity!

These Hawaiian pizza quesadillas look AMAZING, and they merge the best of Italian and Mexican snack foods into one delicious dish.

Feeling inspired? Of course you are! Go out and experiment with your pizza, and watch the windows of opportunity open before your very eyes. After all, there's more to life than just plain old cheese and pepperoni.