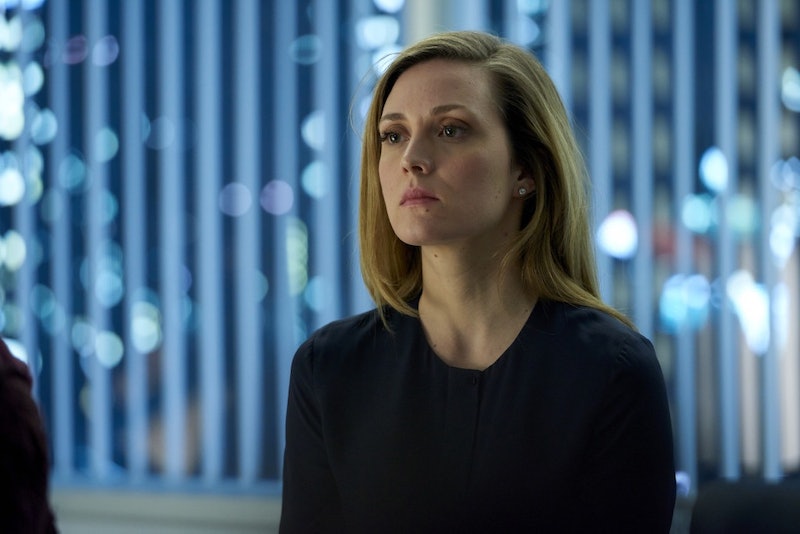 At the ATX Television Festival, the creators of Orphan Black teased that no one would be safe during the Season 3 finale and guess what? They weren't kidding. It took up until the very last moments of the show to figure out who'd be the season's big causality. Turns out, it's Delphine. She spent a season with wavering loyalty lines, one second trying to help Cosima and the clones, the next keeping clone secrets from them. It all comes to a head during the finale moments of the episode when she's gunned down in a parking garage. Now the big question is, who shot Delphine?

Here's what leads up to this big moment: Delphine sets Cosima free, relationship speaking. She first goes to talk to Cosima's new girlfriend, Shay, and tells her to take care of herself, and then take care of Cosima. Then, Delphine stops by Alison's big dinner party, calling Cosima outside. She basically says goodbye to her then and there, so part of me thinks Delphine knew she was heading off to meet her end after this moment. Her and Cosima share a pretty passionate kiss, with Delphine telling Cosima to say goodbye to her sisters, too. She's leaving.

There's one other thing, too. Delphine and Dr. Nealon have a a little scuffle. OK, it's actually a big scuffle where Nealon tries to kill Delphine with like, a leech. It's some sort of slithering little bug that Nealon coughs up, and then tries to spit into her mouth. Oh yes, Orphan Black went there. Delphine shoots him before he can drop it into her mouth (ick) and his last words to her, "You'll be dead before morning."

So yeah, let's go with Delphine knows something bad is going to happen. That's why she goes to see Shay, and that's why she goes to say goodbye to Cosima. She then heads off to the parking lot, where she leaves one car to get into another. There are footsteps. Delphine stops. She puts her bag down and turns, asking, "What's going to happen to her?"

My guess? It's a female. But who? The footsteps that can be heard in the garage sound like heels rather than shoes or boots, so I do really feel like the culprit is a female. My first guess is Shay, But I don't know. I want to think the best of Shay. Sure, she's part of the military and has kept that secret from Cosima, and yes Delphine tried to kill her an episode ago, but I really don't want Shay to be bad.

My next guess was Susan Duncan, but that was quickly scratched when we saw Susan Duncan on the other side of the world in the next scene. Might it be Clone Mother, Kendall Malone. Could it even be.... Mrs. S? I feel like Mrs. S's role in all of theses gets more and more intense with each passing season. I know she's got good intentions and wants to keep Sarah, and all the other clones, safe, but could that mean killing Delphine?

Maybe it was Rachel and her robotic eye? There are SO many people it could be, and all we've got to go on is the fact that there are footsteps, and Delphine sort of recognizes them — I mean, it's not like she's shocked and surprised to see them or anything. She knows it's coming. But who is it?

Looks like we've got a long Orphan Black hiatus to try and figure that out.