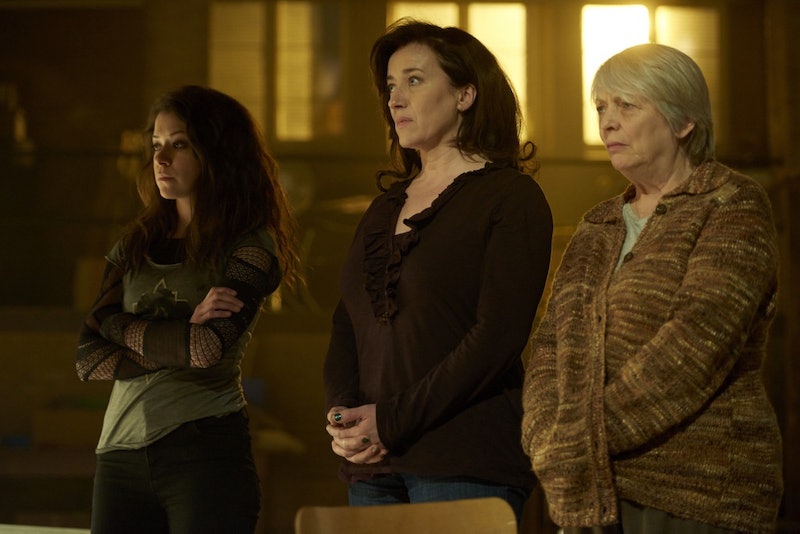 After an especially crazy season of Orphan Black, we've finally got a big clone answer about who's behind everything. Is it Castor? Is it Leda? Is it Dr. Leekie and his gang? It's none of the above. Neolution is controlling the clones, and they're the ones pulling the strings behind everything. The male and female clones are more intertwined than originally thought, and now even more so. The shady organization first introduced in Season 1 turns out to be behind everything. Oh boy.

OK, so a little Neolution refresher first? Yes. From the official Orphan Black recap on the official Orphan Black website, it's summed up pretty perfectly. Neolution is: "a fictional term, a sort of philosophical composite, designed to tribute several contemporary and historic perspectives on “directed evolution.“ At its root, it represents the belief that scientific advancements can and do improve the human condition, so anything we can invent or develop scientifically to do that should be applauded. Even if those discoveries and inventions can refine the terms of the species’ survival."

Basically, think of Neolutions as the exact opposite of everything the Prolethians stand for. the Neolutions are basically all about advancements in evolution in science, and Aldus Leekie used to be the face of them — but that was before Donnie accidentally killed him in Season 1 (remember that?!).

Honestly, I forgot all about Neolution. Because come Season 2 it was all about the Prolethians and trying to escape them, and then Season 3 became all about trying to get to the bottom of this whole Castor thing. So yeah, Neolution. They're back, and now it looks like they're being controlled by someone long thought to be dead: Susan Duncan, Rachel's adoptive mother and one of the first to start working with the clones.

And on top of just Neolution being brought back the forefront of Orphan Black, they're also behind both Castor and Leda. This was always suspected. But once again, kinda forgot about them for like, two seasons. This season made it seem like Castor and Leda were two completely separate entities, with Castor being for the military and Leda being for scientific research. But now, it doesn't seem like that's the case. They're both one in the same, even more intwined than I originally thought.

On top of all of this, Rachel's with her mother and Neolution in some undisclosed location. They've also given her a crazy looking robotic eye — so is this the next advancement for the clones? Have they done all they can with the genetic codes, nd now it's time to start adding something a little bit more intense? We don't really see what Rachel's new eye can do, but she can see again. Looks like this will be the direction of Season 4. Castor, Leda, Neolution, and some crazy new scientific clone things.