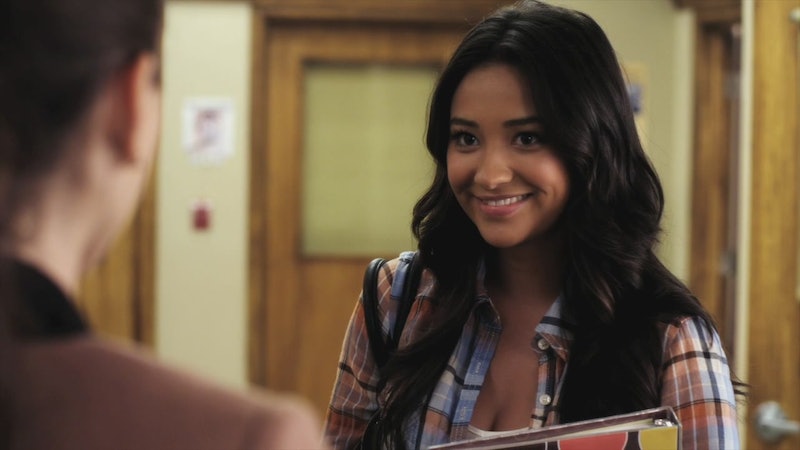 LGBT characters have historically been under-represented on television, but Pretty Little Liars is one of a number of shows helping to break the mold. The show's depiction of Emily Fields' sexuality, from coming out as gay to her dating life, is both realistic and empowering to teens who may be struggling with their own sexual identities. While no single show or character can fix the homophobia that unfortunately still exists in our society, the fact that Pretty Little Liars targets teen girls and young women should not be overlooked. Seeing a character like Emily has the potential to both inspire gay teens and help others understand what their peers are going through.

Pretty Little Liars' biggest success in this storyline is not letting Emily's sexuality define her. As is likely the case for many LGBT teens (and adults, for that matter), coming out wasn't all smooth sailing, and Emily's struggle was an important plot point that the series never shied away from. She was initially reluctant to label herself and when she did come out, not only did she face some cruel comments at school, but even her mother was unsupportive. Still, Emily's three best friends were unfailingly supportive and always happy to remind her that she was still the same person they'd always known and loved. Five seasons later, the dust has settled and Emily's sexuality is no big deal. Like her friends, she is a likable and multifaceted character who has been in a number of romantic relationships throughout the series.

Emily also receives support offscreen from the actress who plays her, Shay Mitchell, an influential star who has 7 million Instagram followers and nearly 3 million Twitter followers. In a 2013 interview with Teen Vogue, Mitchell reiterated Pretty Little Liars' important message by saying that she didn't think twice about playing a lesbian on the show.

I have a lot of friends who are gay; my aunt had a girlfriend. It's just normal... I'm not playing the gothic chick dressed in all black who eats lunch in the corner and is a lesbian. If you look at the poster, you wouldn't necessarily be able to pinpoint which one of us is the lesbian, and that was really important to me.

Mitchell has also spoken about the positive feedback she's gotten from LGBT fans of all ages who are grateful to see themselves represented on television, as seen in the video below.

There are two women who are largely responsible for the excellent way Emily's character has been presented: Sara Shepard, who wrote the books that PLL is based on, and I. Marlene King, who brought the story to television. In an interview with AfterEllen, King said, "I would give some of that credit to Sara Shepherd, who wrote Emily as very truthful and real. And she gave us so much to build upon," however her own contributions should not be overlooked.

In fact, King herself may serve as an inspiration to PLL fans. As one of few female showrunners (or TV writers in general, with women only compromising 29 percent of writers in the 2013-14 season, according to the Writers Guild of America), King is already a role model, and as a gay woman, she may be an even greater inspiration for viewers than Emily. In a 2012 interview with SheWired, King expressed how important it was to her that Emily not be treated or portrayed differently for her sexuality.

When I very first read the book, and just in theory, you see the poster for pretty girls -- a show about pretty girls who lie. Who would have thought that we could also have this fantastic positive impact on young people, and I will just say, all people who watch this show? We want to make the sexuality somewhat irrelevant in our world. Emily is just another Pretty Little Liar and that’s the stance we took from the beginning, and it’s the stance we continue to take.

Now that Emily is out, her sexuality hasn't been a big topic of conversation on the show, because just like King wanted, sexuality doesn't define anyone on Pretty Little Liars. But that doesn't mean fans should forget what this Liar has been through. Let's look back at Emily's Season 1 storyline, which just serves as a reminder to how great PLL has been since the very beginning.

Her Mom Was Initially Not Supportive, But She Came Around

Pretty Little Liars didn't sugarcoat the struggles that can accompany coming out. When Emily initially told her mom she was gay and introduced her to Maya, Mrs. Fields was openly hostile towards her daughter's new love interest. She didn't mince words in telling Emily that she wasn't OK with her sexuality and was sick over it. But when she learned that Emily had been publicly humiliated at school by Paige's dad, who claimed she was getting preferential treatment on the swim team due to being gay, Pam slowly gained perspective. While acknowledging that she still didn't completely understand her daughter, Mrs. Fields realized that Emily had to face enough discrimination from others and certainly shouldn't be judged by her own family.

During her Queen Bee days, Ali thrived on playing mind games with her friends. She was aware that Emily was in love with her and had a knack for exploiting anyone's vulnerabilities. She kissed Emily, then told her it was "just for practice." In Season 5, Ali apologized for making Emily believe that her crush was one-sided and acknowledged that she had feelings for her friend. Ali's sexual orientation remains unclear, but we can be sure that any further exploration won't change how viewers or friends see her. Like Emily, she's far too complex a character to be defined by any one trait.

Her True Friends Supported Her Unconditionally

When Emily told the other Liars she was gay, they took it in stride the way any true friends would. Hanna put it best: “You were Emily dating Ben, and now you’re Emily dating Maya. We love Emily; no one cares who you’re with.” In the same way new boyfriends need to earn their trust, they remain skeptical of any potential girlfriends — you can never be too careful in Rosewood, after all.

Emily is a Pretty Little Liars fan favorite for plenty of good reasons. She's kind, loyal, and brave, and she always has her friends' backs, no matter what. Coming out and dealing with her mom's disapproval certainly made her all the more strong and courageous, but ultimately when we think of Emily, her sexuality isn't the first thing that comes to mind — and it shouldn't be. Mitchell, Shepard, and King have all made sure of that.

For more Pretty Little Liars, check out Bustle's new podcast, "Taking This One To The Grave."

More like this
Read Dan Levy's Heartbreaking Message After The Club Q Shooting
By Stephanie Topacio Long
Amanda Gorman Shared A Powerful Message On Meghan Markle’s Penultimate Podcast
By Darshita Goyal
Claire Foy & Rooney Mara Revisit A Devastating Tale In 'Women Talking'
By Bustle UK
How Is The British Royal Family Related To The Romanovs?
By Karen Fratti
Get Even More From Bustle — Sign Up For The Newsletter