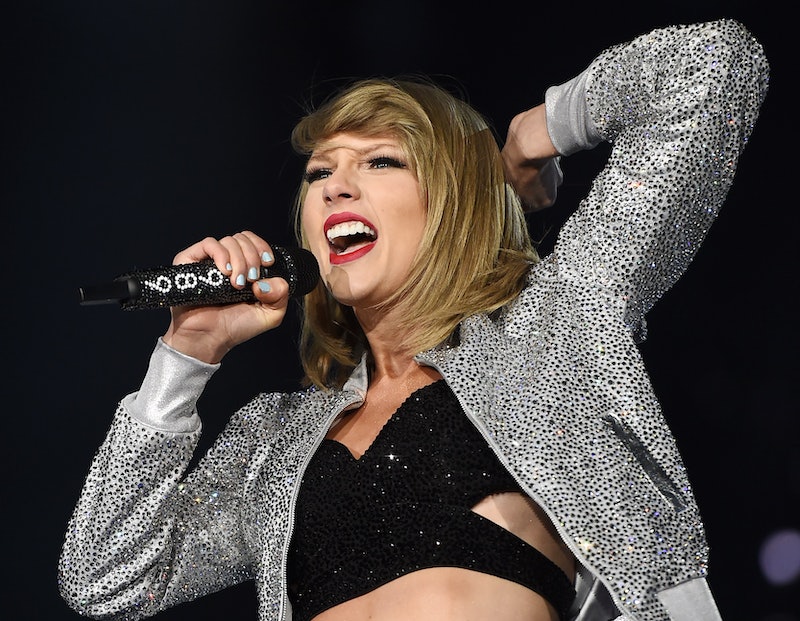 Guys, I don't know about you, but I'm beginning to think that a certain 1989 pop star is some kind of superhero. There can be no other explanation for the fact that Taylor Swift refused to have her music on Apple streaming, explaining herself in an open letter that cited the fact that the company would not be paying writers, producers, or artists for the three-month trial period for customers. “I find it to be shocking, disappointing, and completely unlike this historically progressive and generous company,” she said, receiving support from celebrities and fans alike. Late Monday night, Apple Senior Vice President of Internet Software and Services, Eddy Cue tweeted that Apple would pay artists during the three-month trial period, and he credited Swift's Tumblr post as a big part of the reason they changed their mind.

There are two ways to approach this news, and the first is the obvious one. Swift has grown into a budding young activist not just for feminism and women's rights, but also for the rights of artists and their intellectual property. Her open letter showed a clear respect and affection for Apple even as she was expressing disappointment in their latest policy. The fact that she was frustrated, but found a way to express her frustration in a healthy, constructive way that made it obvious that her problem lay not with Apple as a whole, but with what she considered one minute issue in their otherwise fantastic treatment of customers and artists, showed her maturity and intelligence. Not bad for a girl who constantly gets flack for writing songs about people who piss her off.

But, even disregarding Swift's actions in this situation, Apple's handling of the situation is something that is truly to be commended. The company read Swift's letter. It saw the support of celebrities and fans. It listened to her well-written complaint, and decided to make a change that would benefit everyone. It would be silly to call a company mature, but Apple has definitely shown how much it cares about its customers and its artists, and how willing it is to come to the table and find solutions. As Cue said in an interview with BuzzFeed, "I did reach out to Taylor today, and talked to her, and let her know that we heard her concerns, and wanted her to know that we were making changes. She was thrilled to hear from us and that we were making the change, and we were grateful for that."

So when it comes to a news story like this, it would be easy to point to the fact that it only took Swift 17 hours to get Apple — one of the hugest companies in the world — to revise their policy because she wrote a letter on Tumblr. And, indeed, that's a huge aspect of what makes this story so groundbreaking. However, in order for there to be change, both sides of a conflict have to be willing to be open, to change, to grow from an experience, which is something that Apple proved that it is willing and capable of doing. This wasn't a fight, a conflict, or a war; this was a discussion, a negotiation, a brainstorming session between Swift and Apple that reached a desired conclusion for more parties. They called Swift directly to let her know that they would be taking her concerns into consideration. Now that's groundbreaking.

Apple is one of the biggest companies in the world and, at the end of the day, Swift is only one artist of many. The fact that they took her concerns so seriously, and turned an entire policy around in only 17 hours, does as much credit to them as a company as it does to her as an artist.

Check out Cue's tweets below, as well as Swift's follow-up tweet thanking everyone for their support.

More like this
Taylor Swift Wanted To Be In 'Twilight: New Moon,' According To Its Director
By Grace Wehniainen
Twitter Is At Odds Over Taylor Swift’s Possible ‘All Too Well’ Oscar Run
By Brad Witter
Taylor Swift & Her Mom Clap Back Against The “Shake It Off” Plagiarism Lawsuit
By Jake Viswanath
Beyoncé & Madonna’s “Break My Soul” Remix Honors A Group Of Black Icons
By Stephanie Topacio Long
Get Even More From Bustle — Sign Up For The Newsletter