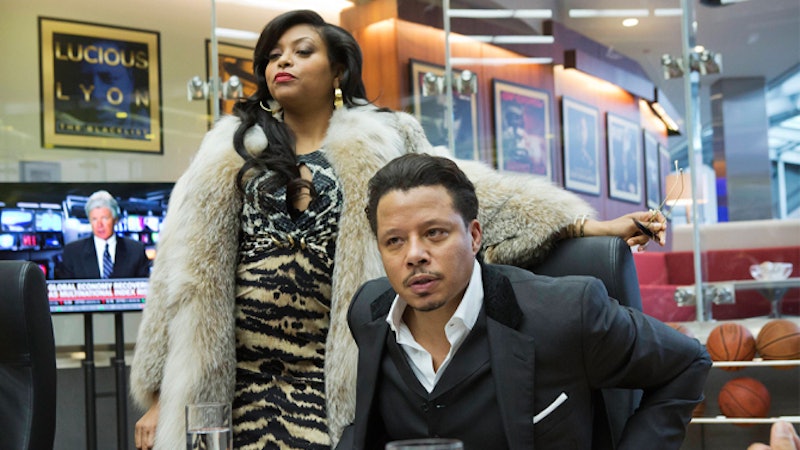 We all know that love and relationships on Empire have their own set of rules and standards that often fall outside of the "norms." When money, fame, and legacy are at stake, relationships become much more than adventures in love and happiness. For the characters of Empire, relationships are about connections, status, and power. It's almost like a game. The Lyons were steadfast in choosing the best partner to help them reach their goals the fastest, love and commitment aside. This result in some badass Empire relationships that may or may not have worked out, and that may or may not have been healthy.

Despite this somewhat calculated mindset, it's the love between certain characters that really elevate their twisted relationships to a whole new level. If you are willing to screw over everyone but your partner, you may gain a ton of enemies. However, you will always have an unwavering ally, someone one who is willing to go to the ends of the earth for you. For example, Cookie and Lucious' relationship helped build their brand, but their scorching chemistry and history may also succeed in burning their empire to the ground.

Despite the ups and the downs, the characters of Empire certainly know how to use one another to get what they want, and there is something gorgeously poetic about that. Starting with the characters who should have never been together in the first place, let's work our way up to the most badass couples on the series.

The duo was cute and all, but Michael really had no back bone. He was devastated when Jamal refused to acknowledge their relationship in the media. However, instead of fighting for Jamal, Michael threw in the towel, letting the music industry swallow up the love and commitment that the pair had. If it's that easy to turn away from the person you love, perhaps you never should have been together to begin with. Also, I never got a clear understanding on what Michael did. As Cookie herself asked, what did he really bring to the table in the relationship?

The older woman-younger man situation can sometimes be extremely exciting, and a welcome subversion to the older man-younger woman trope in pop culture. Unfortunately, this was not one of those times. Instead of joining forces and becoming a true power couple, Camilla used Hakeem for his name and status, while he was using her as a replacement for Cookie. Most of their scenes together came across as creepy, and I was not sorry when Lucious shipped Camilla back to England. Still, if Cookie had not been released from jail, and Camilla's business was in better shape, she and Hakeem may have given Lucious a run for his money.

I was really rooting for these two, especially after Cookie finally opened her eyes and saw Lucious for the monster that he really is. However, Cookie and Malcolm's happiness was short-lived when Lucious discovered their relationship. Instead of striking back at Lucious, Malcolm cut his loses and headed to D.C., leaving Cookie behind to try and put her company and her family back together. Sigh. I was really hoping Malcolm would be the Jake Ballard to Cookie's Olivia Pope.

Hakeem and Tiana really could have been the next It couple but, unfortunately, Hakeem's immaturity contributed to their downfall. Though Hakeem was tangled up in Camilla's web, he had the nerve to be jealous when he discovered Tiana was in a relationship with someone else. Instead of just continuing an amicable facade for the sake of their careers, Hakeem let his ego take over. Still, Takeem was a badass team while they lasted, and there may still be hope that they reconnect during the second season of the show.

As the man that motivated Jamal to be his true self, both in private and in public, Ryan is pretty badass all on his own. Now that Jamal is running Empire Entertainment, he's going to need someone as self-assured as Ryan in his corner.

Before Cookie's release from prison, Anika was heading Empire Entertainment from the creative side, and the duo had made the company one of the top in the music industry. If Lucious' connection with Cookie hadn't been so strong, and Anika didn't let her jealously interfere with her career goals, she might have been able to manipulate Lucious and freeze Cookie out of the company completely. Still, when they were together, Lucious and Anika were pretty unstoppable.

The King & Queen of Manipulation are seriously two of my favorites on Empire. While their relationship is unconventional, to say the least, it worked for them. Had Andre's mental illness not caused him to spiral out of control, the duo may have succeeded in pitting Jamal and Hakeem against each other while taking over Empire Entertainment themselves. Still, I wouldn't say that Andre and Rhonda are down for the count just yet. With a new baby as motivation, I'm sure they will be back in effect for Season 2.

What can I say about these two, other than the heart wants what it wants? It's more than love if you are willing to take the sole blame for a crime that both you and your spouse committed together. After 17 years apart, Cookie and Lucious still sizzled together, and they certainty were an amazing team while it lasted. Cookie's street savvy and musical genius helped Lucious elevate Empire Entertainment. When they mentored Hakeem and Jamal separately, they both helped mold their sons into successful artists who had no need to compete with one another. Had Lucious' pride and ego not gotten in the way, the alpha male and alpha female of the Lyon clan would have been a spectacular sight to see. As it stands, they still count as the most badass couple the show has to offer.