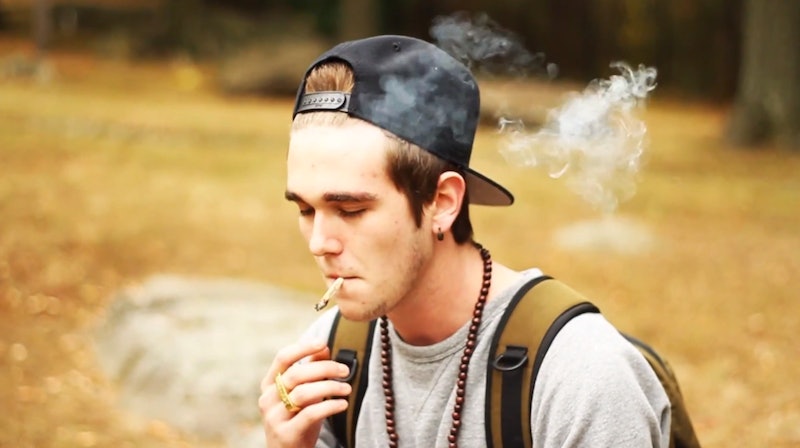 What possessed Daniel Day Lewis' son, Gabe Day, to start rapping doesn't matter — all that matters is this video is probably the worst thing I've seen all month. And that's saying something, considering "Bound 2" was just released. I don't even know where to start with Gabe's video. I literally have so much dislike for it that I can't pick out one thought from my mind, and all I want to do is rip off that stupid cap from this kid's head and shake him until he realizes he can do better. Like, I thought Bob Dylan's rapping grandson was the worst it could get, but I was so wrong. So wrong.

The video doesn't have a plot and it doesn't seem like Gabe's song, "Green Auras," (green because get it, WEED) has much meaning, either. In fact, all I've been able to gather from this song so far is that Gabe is a white kid who attends Sarah Lawrence College, has a lot of white friends, and they all smoke weed together which they purchased with their parents' money. Oh, and Gabe also doesn't want you to judge him because his dad is a BAMF, as he specifies in these lyrics: "Judgin' someone for their dad is just as bad as being racist/ Call me Gabe Day and not Gabe Day-Lewis, because if you're trying to call me out I'm 'bout to Gabe Day-Lose-It!"

1) No, Gabe Day, your #whitepeople struggles and the fact that you are judged by the fact that your dad Daniel Day Lewis is not as bad as RACISM. And 2) Who the hell told you "Gabe Day-Lose-It" was a good idea? They were lying.

The video isn't any better: After describing himself as a "bipolar stoop kid" in the beginning of the song, the video just shows us a lot of shots of Gabe getting high with a gaggle of rich friends and trying to act as if he's some sort of street gangster.

More like this
Stormi Just Walked A Red Carpet With Mommy Kylie Jenner & Daddy Travis Scott
By Hugh McIntyre
Is Megan Fox Pregnant? MGK Gave A Shout-Out To Their “Unborn Child” Onstage
By Hugh McIntyre
Jennifer Lopez Found The Perfect Ben Affleck Throwback Video For Mother’s Day
By Stephanie Topacio Long
Ryan Reynolds’ Mom Hilariously Tests His Patience In A Mother’s Day Video
By Brad Witter
Get Even More From Bustle — Sign Up For The Newsletter