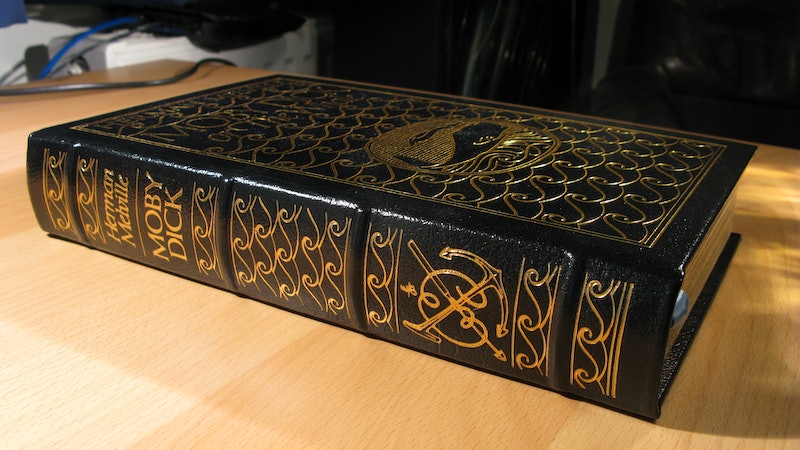 Two years ago, one man began an epic journey. Now, the efforts of Fred Benenson have finally come to fruition: Emoji Dick , a translation of the great American classic Moby Dick into Emojis, is complete and available for purchase. And believe us when we say it's an epic: Benenson raised more than $3,500 on Kickstarter for the project, and employed a host of strangers to translate every sentence of Herman Melville's 1851 novel. Each line of the long, long book was translated three times, using a different range of Emojis for each version. Finally, another group of strangers-for-hire voted on the best versions of each sentence, and the winning lines made it into the final version of Emoji Dick. They don't call it a great American struggle for nothin'...

And now, Emoji Dick can be yours — for just $200 for a hard-backed cover, or $40 for a soft-backed version. Good Lord. "Seriously, why?" demanded the New Yorker's Book Bench at the outset of the project.

"I’m interested in the phenomenon of how our language, communications, and culture are influenced by digital technology," responded Benenson, who hails from New York. "Emoji are either a low point or a high point in that story, so I felt I could confront a lot of our shared anxieties about the future of human expression (see: Twitter or text messages) by forcing a great work of literature through such a strange new filter."

Benenson utilized Amazon's Mechanical Turk service for the project, meaning Benenson himself got to sit back and act as editor and coordinator. The Mechanical Turk feature on Amazon is essentially a job board: employers post what they're looking for, and individuals sign up to do the work for a specified fee. EmojiDick.com informs us that "Each worker was paid five cents per translation and two cents per vote per translation." So, you know, the Emoji app didn't facilitate slave labor or anything.

As a side note, we're sort of glad that Benenson bought EmojiDick.com, at least so that nobody else could. We can imagine how that might have gone.

"I also really like the whale emoji," Benenson confided to the New Yorker. "So that seemed like a good fit, too."

Sure, there already exists an Emoji art show, and a petition that demands Apple adds more ethnic diversity to its Emoji palette. But this is, to the best of our knowledge, the first full-length Emoji translation of a novel. And what a novel it is: Moby Dick is second only to War And Peace in terms of sheer length of a popular novel. Plus it's very complex, important, and culturally significant. Obviously.