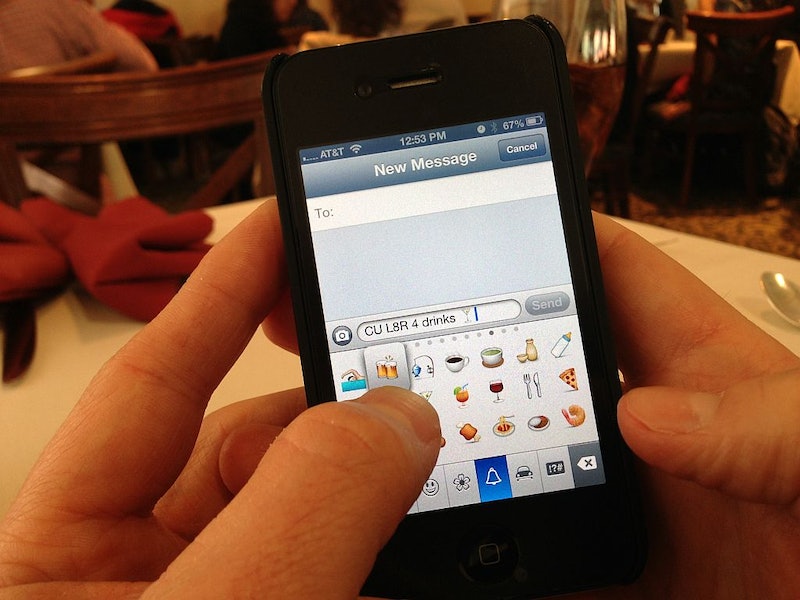 Once upon a time, we had emotions. Now, we have Emojis.

At our disposal, we have ten different expressions of anger, a dozen heart symbols, at least five stages of boredom, and more baby animals than you can shake a stick at. What we don't have, however, is a single black Emoji. Now, a petition is circulating (and has amassed more than two thousand signatures) on DoSomething.org, urging Apple to "add more diversity" to the Emoji spectrum. It states:

When it comes to faces outside of yellow smileys, there’s a staggering lack of minority representation. The company has already taken steps to make Emojis more inclusive: iOS6 debuted same-sex couple Emojis. That’s why we’re asking Apple to take the lead again and diversify their Emoji typeface, recognizing people of color as people... and Emojis. Everyone deserves to feel visible and represented.

Apple’s new iOS7 is launching this fall, so let’s speak up and get this changed. Tell Apple to update their iOS7 Emoji keyboard to include at least four faces with some melanin: a man, a woman, a boy, and a girl.

Since the Japanese app burst onto the scene in 2010, it's imprinted itself onto the interface of popular culture. Katy Perry packed her latest music video, Roar, with Emoji-faces expressing the song's lyrics on-screen. Apple integrated the Emoji keyboard into its iOS last year, making those little faces even easier to access. And then there's that notorious scene in HBO's Girls, in which an exasperated Ray tells Shoshanna: "When you just send me a text full of Emojis, it is so easy to dismiss you. A panda next to a gun next to a wrapped gift?! It makes no sense!"

But how much do these tiny, adorable images actually promote racial stereotypes? Um, a lot.

There's one Emoji with a dark, burly moustache (Mexican), one with dark skin and a turban (Indian), and a vaguely Asian-looking Emoji wearing an inexplicable red-and-green hat. The Emoji expressions — happy, sad, angry, panicked, sleepy, shocked, worried, excited — are all Simpsons-yellow, but its spectrum of faces are, with the exceptions of those three, solely white.

This is especially bizarre when you consider that it's a Japanese application, and aside from ethnic origins, several cultures are well-represented: you have the Edward Munch "Scream" face; the Statue of Liberty; flags from every major country likely to use Emojis; and a multiethnic supply of food images.

Not only are there no black Emojis or even an appropriate array of minority faces, the races that are represented are bizarrely stereotyped. A turban? The bizarrely wide-set eyes of the "Asian" Emoji? We dread to think what that little man with the hair down to his mouth is meant to represent. A Beefeater? A member of One Direction?

There's no question that Emojis lack diversity, and their climbing popularity in personal use and popular culture does require them to be more representative of the multiethnic population. The DoSomething.org petition, however, misses the point a little: It's not Apple who should be called upon to regulate Emojis' ethnic diversity. The petitioners promise to take the signatures directly to Apple CEO Tim Cook, which would be a) almost prohibitively difficult, and b) useless.

Emoji is a third-party app, just like Facebook and Twitter are. (Speaking of Facebook, they've just announced emoticons as well.) Apple's iOS has integrated it into their interface, meaning that it's easier to access while typing, but they've done the same with Tweets and Facebook posts. No one is calling on Apple to ensure that abusive Tweets are removed from their TweetDeck, for example, or that certain Facebook posts be censored from the app. That's because it's not the responsibility of Apple to monitor every element of its third-party apps.

It's Emoji's responsibility to promote racial equality, just like it supported same-sex marriage when it added a same-sex couple to its emoticon spectrum. (They don't have mouths, which is questionable, but, hey it's a start?)

More like this
The True Meaning Behind Each Hand Emoji
By Bustle Editors and Emma Carey
What Is “Night Luxe?” Breaking Down TikTok’s New Aesthetic
By Courtney Young
TikTok Is Using A ‘Love Island’ Sound To Expose Their Weird Crushes
By Courtney Young
The Viral TikTok “30,000” Sound Fits Nearly Every Scenario
By Courtney Young
Get Even More From Bustle — Sign Up For The Newsletter