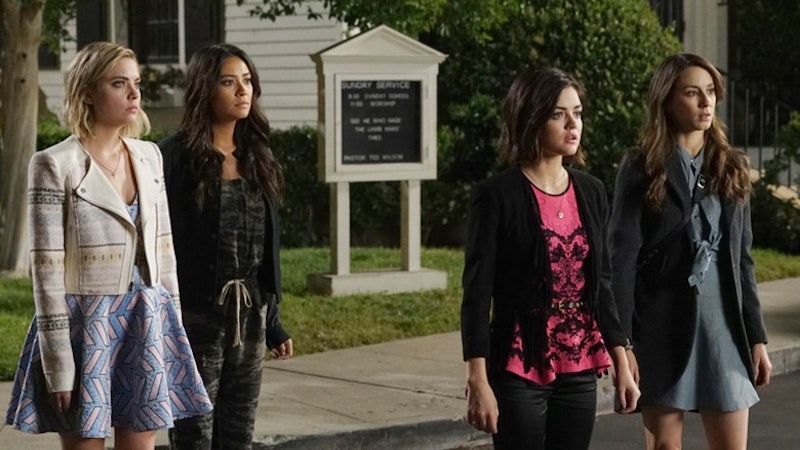 Here we are, once again, speculating as to whether or not one of the Liars, particularly Aria, on Pretty Little Liars is actually A. But don't think we're just picking on Lucy Hale — pretty much every single one of the Liars (including Ali, who spent most of the series "dead," and Spencer) has been under the microscope at one point or another. And now that we're slowly drawing nearer and nearer to the big A reveal (the actual big A reveal, not the completely unhelpful "Charles is A" situation from the Season 6 finale), it's time to start getting serious, because odds are one of the Liars really will end up being A.

I'm not just saying this because it's my own personal opinion, though. I mean, it is, but I wouldn't dare make any theories or assumptions about PLL without doing my research first. I'm pretty sure I would get unceremoniously tossed from the fandom if I even thought about doing that. This is a highly scientific study done by a highly non-scientific mind and I'm here to share all of my findings with you. I wouldn't necessarily take my word as law, considering I. Marlene King has a unique ability to throw us for repeated loops at her will because she's a wildly evil genius. But I'm pretty confident with this evidence. So, without further ado, I (proudly?) present the odds, on a scale of 1 to 10, that each of the Liars is A.

Like I said, Aria is the most commonly-accused A candidate. Think about it: The A texts started when she "came back from Iceland" (I put that in quotes because there are plenty of people out there, specifically on Tumblr, who think that Aria never actually went to Iceland, but instead spent a year locked up in Radley); she started up a relationship with someone who was digging up information about Ali's murder (maybe she was trying to prevent Ezra from finding out she was involved); and even Lucy Hale herself has admitted that it's possible, saying,

"It would make sense. I mean, she’s always kind of, like, missing. It's usually like the three girls and Aria's never there.”

And let's not forget that I. Marlene King herself has alluded to Aria's wardrobe and Mona-fied nickname on Twitter on multiple occasions when fans have asked her who A is:

Odds That Aria Is A: 9. I don't think anyone would be surprised if this was how the story ends, though it would admittedly have been super effed up of her to mess with her parents' marriage. Also, the fact that she let her weird college admissions essay to Talmadge come back to haunt is a little weird. But we can overlook those little things.

Lest we forget, Spencer was a member of the A team for a bit after she discovered that Toby was as well. Sure, it ended up being a bit of ploy, and the plot line was wrapped up annoyingly fast, but it happened. Spencer is also insanely smart, had a drug problem that could have addled her brain enough to lead her down A's evil path, and she spent some time in Radley — which is, in some way, behind everything.

Odds That Spencer Is A: 5. Somehow this feels too easy to me. I don't know that I'd be surprised if we found out that Spencer knew who A was, or that she was working with A to some extent, but I think, at the end of the day, her life was really ruined by A's actions and there's no way she's self-destructive enough to ruin her own life like that.

Emily is perhaps the most emotionally scarred by A. The cyber-villain has essentially done away with all of Emily's girlfriends and she seems to be taking the return from the dollhouse harder than any of the other girls. On top of that, I don't know if any of you have noticed, but she's by far the worst liar of the bunch. The only way it would be possible is if Emily turned into A after Ali disappeared in a twisted attempt to find her killer.

Odds That Emily Is A: 0-1. I'm sorry, but there's just no way. It would be an amazing twist if she were, because it would mean that she was only acting like an emotionally-distressed, bad-at-lying teenager, but I just don't think it'll happen. Besides, Ali loved Emily, so once Ali returned, Emily's need to keep up the A charade would be over.

Hanna established herself as a petty criminal right from the very start with all of shoplifting, and now she's with Caleb, a professional-grade hacker who can pretty much do anything he wants so long as he has access to WiFi. Also, as it turns out, Hanna is insanely smart—she's the only one out of all the girls who managed to get high SAT scores and admission into tons of colleges despite their being tortured for two years by A. Finally, A's big torture tactic for Hanna early on was to fat shame her, and I'm pretty sure Hanna wouldn't do that to herself.

Odds That Hanna Is A: 6.5. The only reason Hanna is so high on this list is because of her relationship with Caleb. I mean, how fascinating would it be if she ended up having the ability to continue her job as A with Caleb's hacking help? It would all be so Bonnie and Clyde...

And, of course, we couldn't leave out Ali. She is, after all, A's namesake. The fact that she played dead for two years and successfully hid from the world speaks to her prowess as a good undercover criminal and a manipulator. Plus, she's insanely resourceful, and it's likely that she knew what the girls were up to even when she wasn't around them. And, considering the fact that Charles is a DiLaurentis and that this whole thing has something to do with her family, it would make sense for her to be behind it from the very beginning.

Odds That Ali Is A: 7. We know she has the smarts and ruthlessness, but is she really heartless enough to put her family through all of the pain they endured. Plus, while we don't know exactly who killed Mrs. DiLaurentis, many suspect that it was A, and would Ali really kill her own mother? All of these questions are important to consider, but this is Alison DiLaurentis we're talking about, and you can never really count her out.

For more A theories, check out Bustle's Pretty Little Liars podcast below.