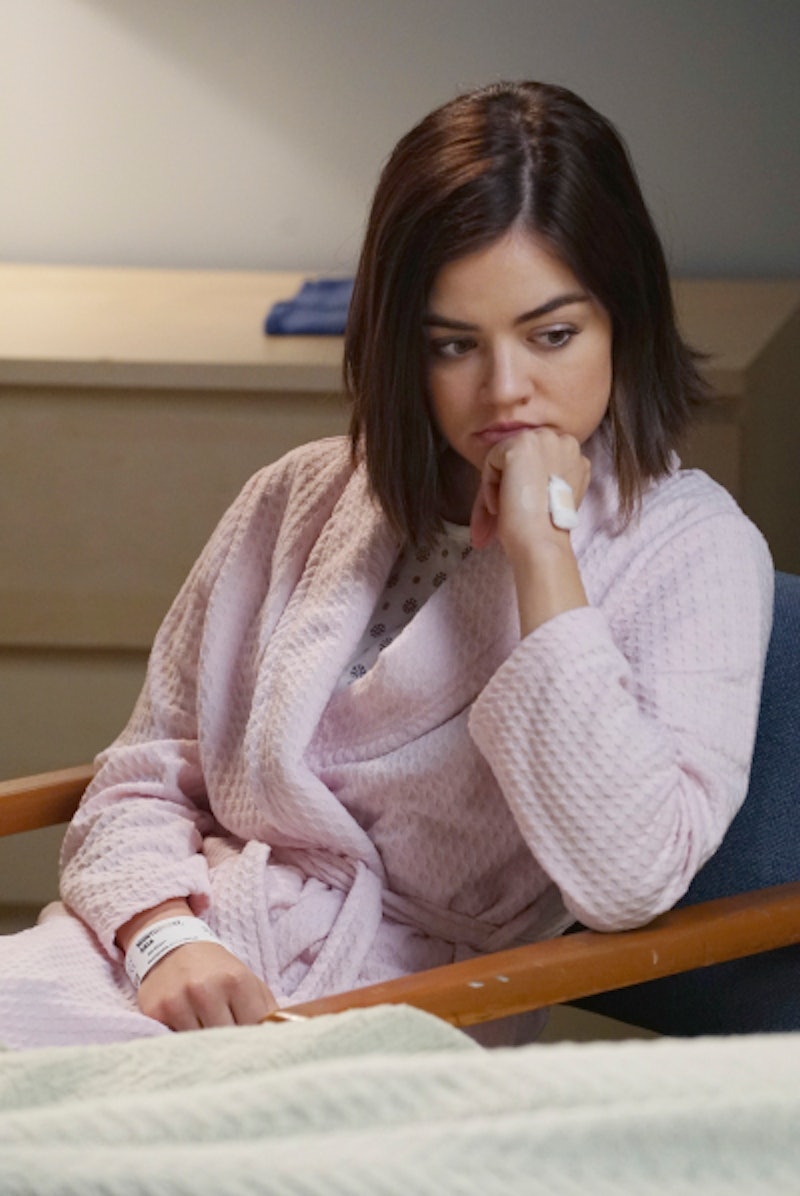 I'm going to level with you here, my fellow PLL fan, I feel like I'm constantly forced to reevaluate what I think about Aria Montgomery. And, after last Tuesday's "Songs of Innocence," there was absolutely no way to stop yourself from thinking about all of those "Aria is A" Pretty Little Liars theories. If you'd already totally written them off, good for you, but if they're still lingering in the back of your mind (like they're lingering in mine), now you have another question to add to the long list of questions for I Marlene King. During Tuesday's episode, Aria lied about seeing Andrew in the dollhouse and, even though there are plenty of reasonable motivations behind that, any skeptical fan of the ABC Family series would still be prompted to wonder whether or not Aria is protecting A on Pretty Little Liars . And, if we're being honest, she might be.

I know what you're thinking — Aria and the rest of the Liars JUST escaped from probably the most traumatizing month of their lives in Charles' dollhouse, of course she wants closure. And the easiest way for her to find that is to blame the nearest suspect — Andrew. But what if that isn't actually Aria's motivation? Did anyone else feel like there was something a little off about how Aria explained to Ella why she'd lied to the police? The answer doesn't "have" to be Andrew and lying to the police is going to do a lot more harm than good — especially if they actual believe they've caught Charles. So, what does this mean and why would Aria purposely lead the police in the absolute wrong direction? For the answer to that, we have to look to Tumblr and a very popular theory about Aria and the Montgomery family as discussed in Bustle's new Pretty Little Liars podcast:

There's a very popular and slightly varying theory that Aria didn't actually go to Iceland with her family and, instead, she was locked up in Radley during the time the rest of the Montgomerys went abroad. Most Tumblr theories about Aria being a part of the A-game and possibly A's biggest supporter are based on three main facts: Eddie Lamb recognized her at Radley, she had a patient file already existing with the girls' therapist, and that A has been around as long as Aria's been "back from Iceland." But, because this is PLL, there are a myriad of other things to take into consideration when we think about Aria playing the A-game.

One of Tumblr's most popular suspects is Byron Montgomery. If you haven't paid close attention to the small details the series has dropped about Aria's father, I totally understand (the parents are never around anyway), but it's worth nothing — especially with the theory that Aria was in Radley — that Byron's family has a history of mental illness. And, furthermore, we know that Aria protected Byron before the series began by not telling Ella immediately that she'd seen him cheating. So, could Charles be Byron? It's unlikely, especially when we consider that Jason seems to have a recollection of Charles in the promo for this Tuesday's new episode. And, well, Byron's a little too old to pass as Jason's sibling/twin/etc.

There's another possibility here — we all know that both Jessica DiLaurentis and Byron had a penchant for affairs. What if — and this is a huge IF — Charles is the son of Byron and Jessica. How do these pieces fall into place? Well, it's entirely possible that with Byron's family history of mental illness, Charles ended up in Radley — which is something we know to be true of Charles' past. It's not exactly possible that he met Aria in Radley (he would have already escaped and attacked Ali and Bethany by the time she ended up there), but it's possible that he linked up with his sister later on, after realizing that she'd also been a patient there. (Assuming, with Charles' ability to know literally everything, this is possible.) If Charles confided in Aria and convinced her to join the game, it'd make perfect sense that she'd try to protect her sibling. We've seen Aria go to bat for Mike, we know how she is when it comes to her family.

Aria going out of her way to blatantly and ferociously lie to the police about seeing Andrew in the dollhouse should make PLL fans wary of "the best Liar." Even Lucy Hale herself confirmed that there's a lot more of Aria that we haven't seen yet on the show and it seems like it could be coming out in Season 6.

More like this
Every Horror Movie Reference In The 'PLL: Original Sin' Premiere
By Alyssa Lapid
The 'PLL: Original Sin' Creators Say A’s Identity Will Be “Very Clear” By The Season Finale
By Alyssa Lapid
Molly-Mae Hague Has Secured Herself A Pretty Little Fortune
By El Hunt
Netflix Reveals First Look At Wednesday In The 'Addams Family' Spinoff Series
By Bustle Editors
Get Even More From Bustle — Sign Up For The Newsletter