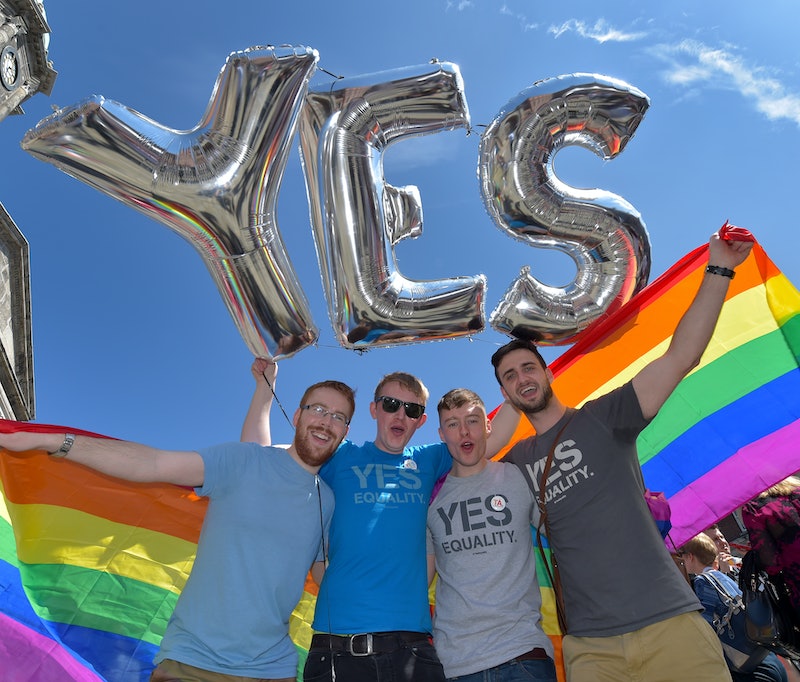 Today, the United States Supreme Court ruled on Obergefell v. Hodges, otherwise known as the landmark case on the Federal legalization of gay marriage, that states can no longer ban same-sex couples from marrying.

For many private corporate entities in the United States, this ruling brought up are other questions to consider. Which side of history do these organizations want to align with? As it turns out, many companies are actively supportive of gay marriage — 379 companies and organizations extended their ideological solidarity regarding gay marriage by signing an Amici Curiae , a Latin term defined as "'friends of the court'... not a party to a case [but] offers information that bears on the case." In this instance, some of the information they offered includes consideration for the well-being of their employees: "State laws that prohibit or decline to recognize marriages between same-sex couples hamper employer efforts to recruit and retain the most talented workforce possible in those states... The burden imposed by inconsistent and discriminatory state laws of having to administer complicated schemes to account for differential treatment of similarly situated employees breeds unnecessary confusion, tension, and diminished employee morale."

As we celebrate the decision that changed the course of history for same-sex couples in America, here are 10 companies who signed the Amici Curiae as proof of their pro-gay marriage politics:

One of the most popular and convenient banking corporations in the country is also a proud supporter of same-sex marriage. Their overdraft fees are often a pain, but I'll also make sure to remember that this company values anti-discrimination policies the next time I use my debit card.

It's no surprise that a purveyor of literature (both classic and contemporary) would support progressive politics. Barnes and Noble has wonderful coffee, a wide selection of books and a dedication to support same-sex couples in the fight for marriage equality.

The Muppets are a goofy but fair-minded bunch. They value friendship and good character and fun above all else. Is it any surprise that this lovable bunch of puppets created by genius artist Jim Henson — were created by a company that supports fair-minded ideals like same-sex marriage?

Google is one of the fastest-growing (not to mention innovative!) companies in the world. Google changed the way we used the Internet. I'm glad that a company with this kind of power and influence is taking a stand in the fight to legalize same-sex marriage. It proves that Google remains firmly on the cutting edge.

Speaking of the Internet, what would our free time today even look like without social media? Facebook is where so many of us connect over shared news, daily posts, personal photos and life events. Facebook's demographics are far-reaching, but their support of same-sex marriage proves that their alliance with progressive values remains intact.

Target — the place you go to buy one thing and walk out with a cart full of stuff you didn't even know you needed. It's convenient and certainly a more liberal alternative to its competitors. I would gladly choose Target over Walmart any day of the week based on their support of same-sex marriage.

What could be better than a pastry and a delicious iced coffee? Starbucks embraces liberalism, even when it's attempts to discuss political issues like race receive mixed reviews. Still, their support of same-sex marriage proves that their social justice values run deep — and perhaps their intersectional approach to identity politics will be adopted by other corporations.

In 140 characters, Twitter manages to emit some of the most topical and pithy ideas from users around the world. Twitter is now confronting issues with cyber-bullying on its platform and seems to be on the verge of taking a more progressive stance on all fronts; their commitment to marriage equality signifies positive changes to the company's newly-evolving image.

I have many (not-so-fond) memories of late-night runs to Staples for a science project backboard — because I was a procrastinator and Staples was open late precisely because of students and workers like me who need printers and copy machines and school or office supplies. Staples' reliability extends to its employees and the company's support of same-sex marriage. That's enough to make me want to cruise their aisles for some old-school art supplies.

Disney holds a special place in the memories of my childhood. From Mickey Mouse to Peter Pan and Ariel the Little Mermaid, I love Disney's music and stories and commitment to fostering a sense of wonder and magic in film-making. It makes me happy to hear that the company is equally committed to fostering a sense of social justice in the workplace by supporting same-sex marriage.