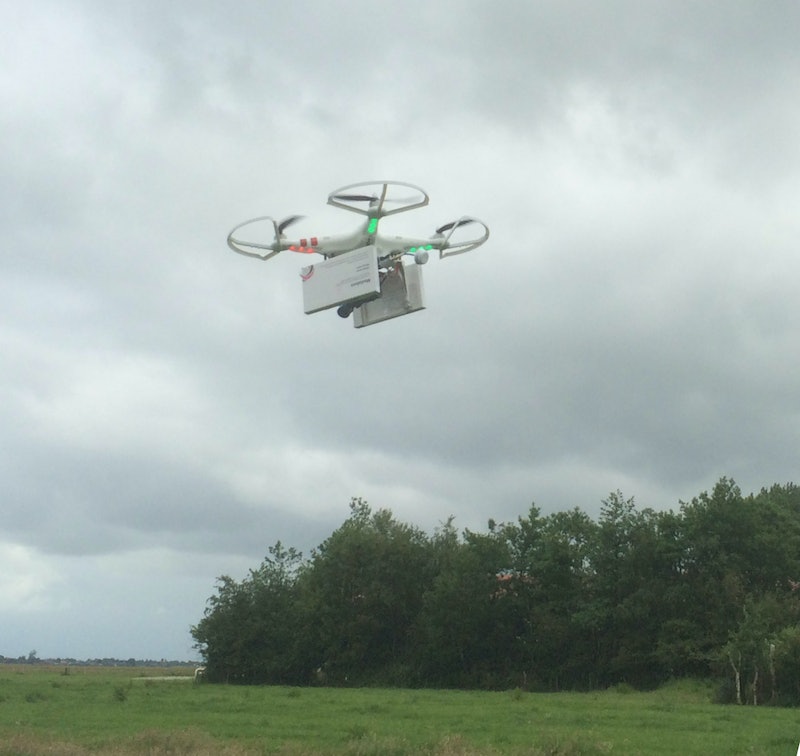 Drones are certainly the way of the future, and it seems like Women on Waves already has the stealthy technology all figured out. On June 27, the group dedicated to helping women safely obtain abortions in nations where the procedure is illegal will launch its first abortion-pill drop via drone in Poland. Yes, that literally means a drone will fly into Polish airspace and deliver the abortion pill to people in need.

When we talk about restrictive abortion bans in Europe, we tend to focus only on Ireland. But over in Eastern Europe, there's another predominantly Catholic country that has been under the influence of the church's hardline anti-abortion stance. In Poland, abortion is only allowed in cases of rape, incest, fetal abnormality, or when the patient's life or health is at risk — so marginally better than Ireland's existing laws on abortion, but not by much.

Like the thousands of abortion-seeking women in Ireland, it's not uncommon for Polish women to travel to nearby Germany to lawfully obtain the procedure. One group there, Ciocia Basia, specifically helps women with travel from Poland to Berlin for safe medication-induced or surgical abortion. "We facilitate contact and appointments with confidential, non-judgmental counselors and medical professionals," the group states in their mission. The support network also provides free accommodations and Polish translators for women who travel abroad.

Now, Ciocia Basia is teaming up with Women on Waves and several other women's rights groups, including the Warsaw-based Feminoteka Foundation and the Polish women's collective "Porozumienie kobiet 8 marca," to launch the abortion drone campaign. The drone is expected to make its first abortion-pill drop on Saturday in Słubice, Poland, just a few miles from the German-Poland border.

"The Abortion drone will mark the different reality for Polish women to access to safe abortion services compared to other women in Europe," Women on Waves said in a recent statement. According to the organization, between 80,000 and 200,000 women seek illegal abortion services in Poland each year, and many of those women end up traveling abroad. The official number of (legal) abortions in Poland, Women on Waves states, is roughly 800 each year.

Abortion was legal, in all circumstances, when the country was under communist rule. But in 1993, Poland completely reversed its policy, outlawing abortion after decades of reproductive choice. The Catholic Church, which saw its influence crushed during the communist era, led a massive anti-abortion and anti-contraception campaign in the heavily Catholic nation, leading to a strong sense of conservative values on family planning. Currently, the nation does not include contraception in its health care system, limiting the family-planning resources for Polish residents.

Women on Waves' drone is set to leave Frankfurt an der Oder at 11 a.m. on Saturday and fly into Polish airspace. The exact location of the abortion-pill drone drop won't be announced until Friday.

The drone will only deliver abortion pills approved by the World Health Organization — a combination of mifepristone and misoprostol, which is the most common medication-abortion method. This is also strict policy of Women on Waves, which advises women across the globe on how to purchase safe and legitimate abortion-inducing medication. The organization often warns that it's not uncommon for counterfeit abortion-inducing drugs to be sold online.

If you're wondering if this is whole drone-flying-abortion-pill thing is legal, it actually won't threaten the safety of Polish women. Although Poland has some of the most oppressive abortion restrictions in Europe, women who have illegal abortions — whether conducted underground by a doctor or done at home with the abortion pill — are not criminalized under current Polish law. Women in Poland also can't be punished for taking action leading to a miscarriage.

And as it turns out, it's actually legal to fly this drone between German and Polish airspace. Women on Waves explained in a statement:

As the Abortion drone weighs less than 5 kg, is not used for any commercial purposes, will stay within the sight of the person flying it and does not fly in controlled airspace, no authorization is required under Polish or German law.

Of course, a magical drone can't be the only answer for restoring reproductive rights in countries where abortion is outlawed. Yet it's a fascinating new tactic for Women on Waves, whose doctors and volunteers previously chartered ships into international waters to deliver the abortion pill to women in need. It worked by sea, so why not by air?