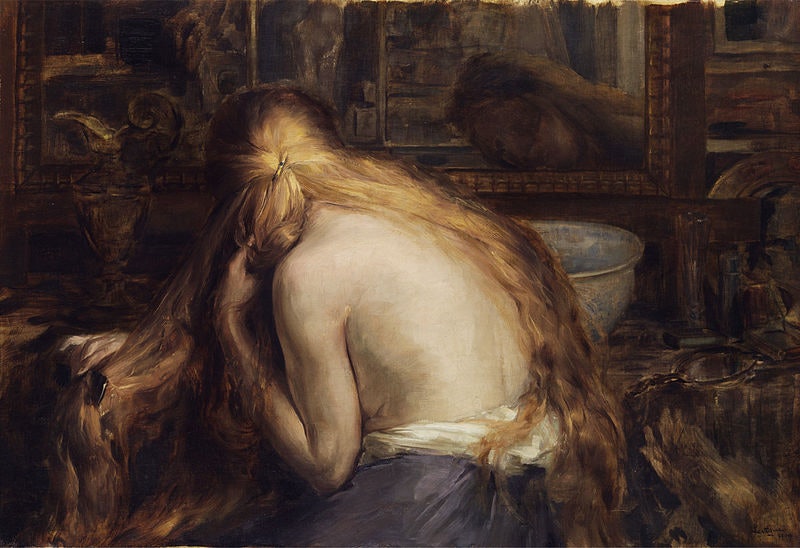 The human race has been obsessed with beauty since the beginning of civilization, from painting lips to darkening lashes, and of course, dying one's hair. But upon doing some research, I discovered that there were some ancient hair dye techniques that were utterly and seriously disgusting. Beauty wasn't just pain back then, beauty was really, really gross, too.

It's safe to say we've come a long way in the last several thousand years, but there is still one thing that hasn't changed: our fascination with dying our hair. It appears that the whole "grass is greener on the other side" concept has always been alive, as people who lived as early as ancient Egypt (through to the present day) yearned to change the color of their natural locks. Some way or another, we have discovered ways to give us hair that's darker, hair that's lighter, and hair that's any color of the rainbow we should so desire.

Hair dye techniques have been (pretty much) perfected today. The process is quite straight-forward: you call upon a professional colorist (or a handy drugstore box if you're on a budget), pick out the color you desire, mix up a few chemicals, apply, allow 30-45 minutes to develop and then wash off. Usually this does the trick. But the people of the ancient world weren't so lucky. They didn't have the technology and science we have today, and some of the methods they used to dye their hair were pretty damn insane.

Why don't we have a look at 5 ancient hair dye techniques that will make you so grateful for boxed hair dye.

The ancient Egyptians saw dark hair as a beauty ideal and used a lead-based hair dye to color their locks black. The recipe for this hair dye called for taking lead oxide and mixing it with slaked lime (calcium hydroxide) and water until a paste is formed. This was then rubbed onto the head.

Back in these days, people had shorter life spans and didn't necessarily care about the safety issues of using lead in their beauty products (as they used lead in almost everything) and may not have even been aware of the dangers until much later on. This is pretty nasty when you think they not only put lead on their heads, but also on their eyes and faces as well. We may still use chemicals today to dye our hair, but in a much safer and more controlled way (unlike the pretty-poison used by the ancient Egyptians).

Unlike the ancient Egyptians who valued dark hair, the ancient Greeks valued light hair. One of the methods they used to achieve this was to take wood ash and mix it with either vinegar or lye soap and apply it to their hair. Now, this is considered a chemical process, and unless you were experienced working with these substances, there were some seriously unpleasant side effects that could occur (aside from the disgusting smell of the vinegar or lye on your head): the mixture could burn your skin and also cause your hair to break at the touch if left on too long. Awesome.

3. Box (Shavings) Of Wine And Honey

As mentioned before in my article on gross Medieval beauty tricks, blonde/yellow was also a popular hair color to have during Medieval times, as well. One of the most disgusting ways to achieve lighter locks was to use a method as follows: mix honey and white wine together, apply it to your hair, and then leave it overnight. Then, add a mixture of calendine roots, olive-madder, oil of cumin seed, box shavings (what for?!), and saffron. Wash off after 24 hours.

Honey, wine, some roots and herbs, and some box shavings (for funsies?) in your hair, for 24 hours? Now that’s some disgusting dedication for the sake of beauty.

In ancient Rome, the Romans used all sorts of crazy methods to dye their hair, including using actual gold dust to make their locks "gold". If you wanted to dye your hair black, however, you were in for a disgusting experience. One would prepare a mixture made from leeches mixed with vinegar. That's right, leeches. They would then allow this awful mixture to ferment for two months. After the allotted fermenting period, they would apply this to their hair and sit in the sun to allow it to bake in. Baking pickled leeches into your hair in order to turn it black? Thanks, but no thanks.

Worms. Yes, that's right; to color gray hair, the ancient Romans used a mixture made from ashes, boiled walnut shells, and earthworms. Crush and mix these ingredients all together and apply liberally to your hair to cover those unsightly grays. Just try not to think of the disgusting worm-paste on your head while you're at it.