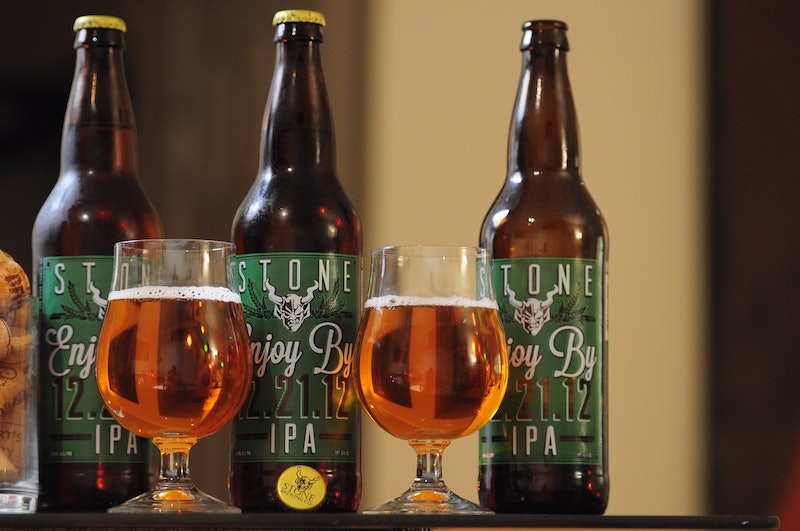 The craft beer industry is booming — but what are the best beers brewed in the United States? Good news: The American Homebrewer's Association has all the answer you need, thanks to its 2015 Zymurgy survey of the best beer in America. Just in time for Fourth of July weekend, right? With this list in hand, you can be sure that any trip to the liquor store you take in the next week and a half will result in some delicious brews for all your favorite people.

The association asked readers of its Zymurgy magazine to cast their votes — and cast them, they did, 19,00 votes were tallied for almost 6,000 beers, with the final results bringing in a ranking of the top 50 American beers (many of which are ties, by the way), as well as the top American breweries, the breweries with the best portfolios, and the best imports.

I'm somewhat ashamed to say that I've consumed almost none of the top 10; even weirder, the only one I have tried is a type of brew I'm just not that fond of as a rule. Not that there's anything wrong with Dogfish Head's 90 Minute IPA; on the contrary, I actually remember enjoying that one fairly well. It just took me a while to figure out that I'm not an IPA woman — too hoppy. I prefer my beers dark, flat, and relatively hopless.

Then again, given that nine of the top 10 are IPAs (well, eight, plus one that's sort of an IPA-darker ale hybrid), maybe it's not that weird that the one I've had from the list was one of those suckers. Apparently we are creatures of habit. Or… something.

Anyway, here's a look at the top 10; head on over to the American Homebrewer's Association website to see the full results. Bottoms up!

Based in Santa Rosa, California, Russian River Brewing is well known for its Pliny the Elder double IPA. Described as “well-balanced with malt, hops, and alcohol, slightly bitter with a fresh hop aroma of floral, citrus, and pine,” it's made in small batches — apparently it's “best enjoyed FRESH!” (emphasis theirs). It's eight percent alcohol by volume.

This seven percent ABV, American-style IPA from the Kalamazoo, MI-based Bell's Beer brewery takes its hops incredibly seriously. With a scent of grapefruit and pine resin, it features an “intense hop aroma” and a “significant malt body” to balance it out.

I may not love IPAs, but I love this label. Ballast Point makes its home in San Diego, where it brews this offering featuring “hints of apricot, peach, mango, and lemon flavors,” while still packing a “a bit of a sting, just like a Sculpin fish.” Sculpins have sharp bits along the lower edges of their pectoral fins, which enables them to anchor themselves in fast-flowing water. Sculpin IPA is seven percent ABV, and it apparently pairs well with tropical-inspired dishes: Coconut rice, Jamaican jerk chicken, and tropical bread pudding (whatever that is — it sounds delicious) are all offered by Ballast Point as sound options.

Seriously, what is it with IPAs these days? Are they having a moment and I just didn't pick up on it? Or is everyone just really into them right now because it's summer? Sigh.

Anyhoo, my feelings about IPAs aside, the Escondido, CA-based Stone Brewing takes the “brewed in small batches” thing and takes it one step further with its Enjoy By brew. Each batch is specifically designed not to last past a certain date — hence the name of the beer — to encourage drinking it fresh. It also packs a wallop at 9.4 percent ABV.

Ah! Finally! A good, sturdy stout! Founders, which makes its home in Grand Rapids, MI, recently got into a little bit of (silly, in my opinion) hot water for the label of its 8.3 percent ABV Breakfast Stout — but you guys? It's described as “the coffee lover's consummate beer,” which means that I clearly must acquire it and consume it as soon as possible. In case you couldn't tell, I love deep, dark beers with notes of coffee and chocolate as much as I hate hoppy pale ales. Also, I suspect you could make one heck of a chocolate cake with some of this stuff in the batter.

Waterbury, VT is home to The Alchemist, which makes one type of beer, and one type of beer only: The Heady Topper, an unfiltered American double IPA that's eight percent ABV. It's designed not to be as bitter as most IPAs, though, so maybe I should give it a shot. Thoughts?

Folks really seem to like Bell's, don't they? The Hopslam Ale is more potent than the Two Hearted Ale, clocking in at a whopping 10 percent ABV; it includes seven diferent types of hop varietals, with a malt bill and a dollop of honey balancing it out. It's described as “a remarkably drinkable rendition of the double India Pale Ale,” although I'll admit that I'm not totally sure why anyone would want to drink an undrinkable beer.

And for our seventh IPA on the list, we have Zombie Dust from the Munster, IN-based Three Floyds brewery. I kind of enjoy the fact that its product description reads simply, “This intensely hopped and gushing undead Pale Ale will be one's only respite after the zombie apocalypse.” For the curious, it's 6.2 percent ABV.

It's been probably about seven or eight years since I've had this Milton, DE-based brewery's 90 Minute IPA; I remember it being fruity, though quite as hoppy as a lot of other IPAs tend to be. Its tastin notes are listed as “brandied fruitcake, raisiney, cirusy,” all of which are things I like — so maybe that's why I didn't mind this one so much.

Welll… huh. This one sounds interesting — it's an IPA… but the Paso Robles, CA brewery calls it “a truly different IPA for dark beer fans.” It's 8.3 percent ABV with “citrus and herbal hop nuances,” a little bit of ehy, and “roasty malt flavors,” offering a “full and complez texture with a refined bittered finish.” Color me intrigued. Also, does anyone else look at the name for this one and think Wookie, rather than Wookey?

Head on over to the American Home Brewer's Association website for the full list of all 50 top rated beers in America.

More like this
13 Summer Solstice Quotes To Celebrate The Longest Day Of The Year
By Sadie Trombetta
Taco Bell Announced A Crunchwrap & Tostada Made With Cheez-Its
By Emma Garza
Is The Insta-Famous Always Pan Actually Worth It?
By Jessica Goodman
Starbucks Released New Menu Items For The Summer
By Emma Garza
Get Even More From Bustle — Sign Up For The Newsletter