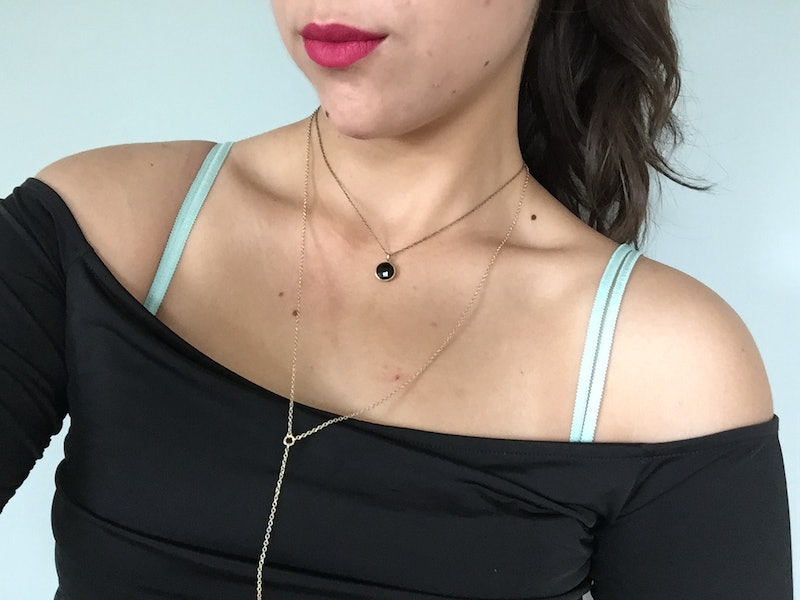 To all my fellow humans who love sporting visible bra straps: This is an ode to the very visible straps on each and every one one of your shoulders. Bra straps need not be hidden, they should be showcased and shown love; but that doesn't mean that every once in a while, you won't come across someone who just won't have it. They'll point it out, say something rude, and walk away as if it were no big deal. But it is a big deal. Because these bra straps are meant to be embraced, and that's a decision I will make on my own!Wow, that got a little heated. But seriously, why are people so averse to seeing someone's bra straps? Almost every woman wears bras (and if you don't, all the more power to you), and I personally wear one every day because of the support and lift it gives my chest. So, since most women wear it, and let's be real, most men are quite familiar with bras, why is it such a faux pas? I'm not very shy when it comes to showcasing undergarments, and the undergarment I'm least concerned about is my bra. My bra is a part of my wardrobe, after all, and I often like to dress around my bra or bralette or brassiere, but just embrace it for what it is while being comfortable and having the correct support. But if I come across someone who absolutely refuses to have it, I always seem to hear about it. And it doesn't just stop at one person. So, in an effort to make bra straps a little more commonplace, and to sympathize with all my peers who also couldn't care less if their bra straps are showing — and maybe even enjoy it — here are seven things women who let their bra straps show are sick of hearing. Because seriously, it's my bra and I'll do what I want with it.

That, my friend, is a bra. Also known as a brasserie, which helps support women's chests. They're very common in the modern world. In fact, most women wear them. And surprise, surprise, I do too. Need I go on?

Some people like to pretend that they don't know what a bra is when they see it in real life, regular situations. Yes, I'm wearing a bra. Yes, it's slightly visible through my sheer shirt and behind my thin tank top straps. No, that does not give you permission to point it out and make a scene.

You ask, what is that? I ask, why would you even ask? You know very well what it is already!

Sure, I have a strapless bra. But if I wanted to wear it or cared about my bra straps showing, I would have worn it. But I don't, so boo hoo. I wore a strapless bra only once, and I hated every minute of it. They fall off you, I always end up messing with them, and they're terribly uncomfortable. Plus, they just ruin the whole point of even wearing a strapless piece of clothing.

In my opinion, wearing a cute bra in a bright color with a strapless dress is easier, more convenient, and especially more comfortable than a strapless bra. In all honestly, I would rather go braless than wear a strapless bra. And that's the truth.

Don't. You. Dare. I cannot tell you how many death stares and friends I've lost because they've grabbed my bra straps, pulled them as far away from me as possible, and just let go. The pain of being snapped by a bra strap is excruciating, and I think all us women know that.

Obviously I'm being a little dramatic, but it's seriously not a joke to mess with a woman's bra straps. Just because my bra straps are showing doesn't invite you to hurt me and put me through inexplicable pain. So do me a favor, and just don't snap me.

Whoa, hold up. My bra isn't showing so you can make assumptions about what kind of undergarments I wear. That "mom bra" is actually a super sexy, lacy brassiere with two inches of push-up padding and an under wire that can easily poke your eyes out. So you better watch your back.

Straps don't necessarily reveal a lot about the bra you're wearing, whether it be lacy, brightly-colored, or just a basic elastic. And plus, guessing what kind of bra someone is wearing sounds like a terrible game. Count me out.

I admit that showing off your bra straps at a professional setting, or any kind of formal setting, might be a little unsightly. It's better to just simply follow the dress code, or choose something to wear that covers your shoulders so you can still wear the support you need in that atmosphere.

But when I'm out on the town, having drinks with friends, and trying to have a good time, you better believe I'm going to show off my sexy, pretty underwear. And my bra straps are right at the top of that list. And if you're so offended by it, just stop looking and everyone can be happy.

6. "Keep your lingerie in the bedroom."

Like I said before, bras are very common in today's day and age. In fact, a woman who doesn't wear a bra is arguably more uncommon than one who does. So no, I wouldn't consider a bra lingerie, and I definitely would never say it needs to be left in the bedroom.

My bras are meant to be worn on a daily basis, providing me with the comfort and support I need to stay focused and on task throughout the day. Otherwise, I would just be distracted all day by my chest area, and no one wants that. So these bra straps are not lingerie at all; they're a part of my life. Mind your own business.

I've got to admit that this one is definitely not something I am asked regularly, but I'm sure it's happened at least once or twice. Because let's be real, letting your bra straps show is going to trigger some kind of reaction — especially from male counterparts — in a casual setting like a bar or club. So while it is kind of funny, it's also annoying. Because we're not wearing bras for anyone but ourselves, and if we choose to let our straps show, that's what's going to happen.

And I'll be damned If I ever change.

More like this
Here Are All 703 Outfits Rachel Wore On Friends
By Kat George
The Best Heels For Bunions, According To A Podiatrist
By Margeaux Baulch Klein and Maria Cassano
Dua Lipa On YSL Beauty, Plus Her Fearless Approach To Hair & Makeup
By Erin Stovall
12 Playful Sagittarius Season 2022 Nail Art Ideas
By Olivia Rose Ferreiro
Get Even More From Bustle — Sign Up For The Newsletter