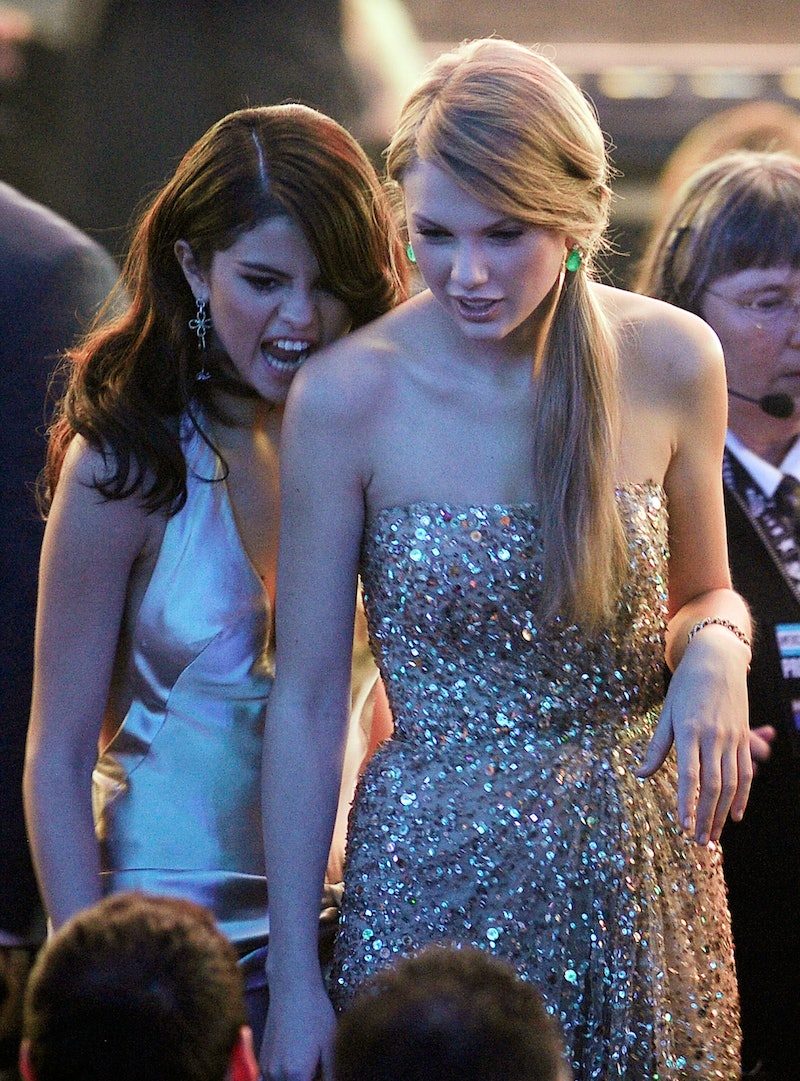 OK, yes: In the "Bad Blood" music video, Selena Gomez may have, um, kicked Taylor Swift out of a window. IRL, though, that is far from the case: these two are total besties. For years, they've BFFed it up on red carpets and at awards shows, reminding us again and again just how adorable they are together. However, Gomez took things to a new level when she threw down a spot-on impression of Swift during an interview on Monday.

While visiting iHeartRadio, Gomez was asked to impersonate the 1989 singer. After taking a moment to get in the Swift mindset, the actress bent down from the waist, whipped her hair around, pointed to the audience and then swiveled around to strike a pose. It so much like watching the "Style" singer herself, it was almost creepy. (Minus Swift's famous "surprised face," of course.)

Not that I had any doubts, but clearly Gomez knows Swift really, really well. It takes a lot of one-on-one time to be able to nail an impression with that level of skill — and this is just one time when they proved their collective awesomeness. (You can see for yourself in the video below!) In honor of Swift and Gomez's amazing relationship, here are nine times when the pair was totally friendship goals.

When They Took This Flawless Selfie

You can add this to your list of selfie goals too.

When Gomez Shared the Amazing Advice Swift Gave Her

"We were sitting by the fire [recently], and I was talking about relationships and business in my life," Gomez said on The Talk (clip above). "She just kind of looked at me and was like, 'Selena, if you're the smartest person in the room, I think you're going to be in the wrong room.' She thinks I should constantly surround myself with people who are going to make me better — that are going to challenge and motivate me." (This amazing insight is also helpful for those of us who aren't international superstars.)

When They Twinned It Up At The 2013 MTV VMAs

Because nothing says "BFFs" like showing up to the same event wearing similar dresses.

Swift's reaction says she feels for what her bestie was going through.

When They Performed "Who Says" Together During Swift's Speak Now Tour

I can't tell who was more excited: The crowd or Swift.

When Swift Gave Gomez A Shoutout The Red Liner Notes

Apparently, select letters in the "22" lyrics spelled out "ASHLEY DIANNA CLAIRE SELENA." I'll let you fill in the blanks.

When Swift Said She'd Go To Gomez For Career Advice

Because that's what BFFs are for.

Anytime They're Seated Together at Awards Shows

They're always having the most fun of anyone in the room.