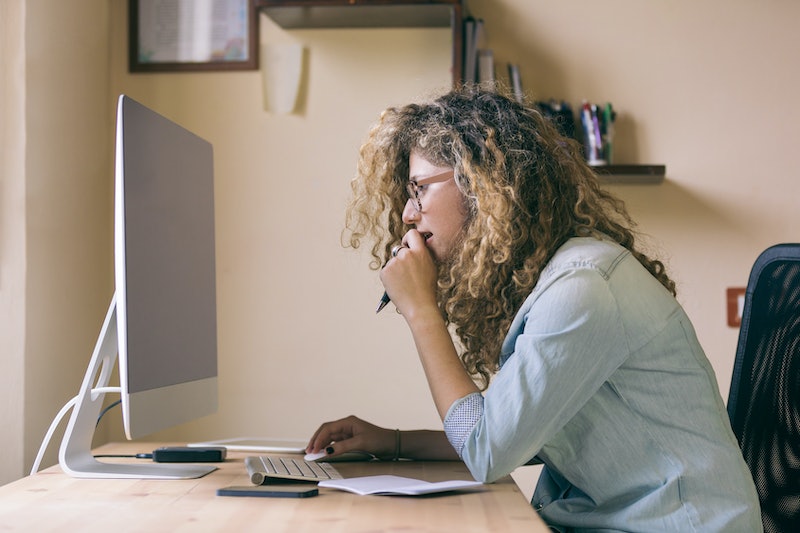 Working while female — It’s a tricky business. Even if you’re a senior executive, owner, board member, or the reigning company queen, people often make bizarre and unfair assumptions about your priorities and proclivities when you’re the woman in the room. They’ll assume you they have family obligations in excess of those of their male colleagues. They’ll imply that you have a special skill for sniffing out common household items — items like toilet paper, a product used by both genders. They’ll suggest through words or actions that you are the best dish-washer, cake-cutter, or napkin folder, and when you react with horror because you’ve been volunteered for a menial task without your consent, they’ll suggest that it “might be that time of the month” and question whether or not you are ready for serious work responsibilities.

There’s more, of course. In many cases, the very language we use in the office — the way we talk about work while we’re there – is gendered in a way that subtly belittles women and/or questions their skills. It’s difficult to call people on using sexist language (ever tried to to pick apart the gendered meaning of a word like “opinionated” on the fly?) and after a while we become inured to their use anyway. Ultimately, women themselves wind up adapting to and proliferating the very language of their exclusion. It’s a vicious cycle and one we need to break, but while women can stop saying these things all they want, ultimately men need to follow their lead we’ll keep winding up back where we started.

These, then, are some of the words and phrases that it’s time to retire in the workplace, because it’s tough out there for a working woman, and calling them “abrasive” every time they make a suggestion doesn’t help.

Sample sentence: "We don't think you're the right cultural fit for that role." This frustratingly vague phrase is often code for “we don’t get your woman-ness and frankly we don’t want to.” Unless a man is from the literal moon, they are generally presumed to understand the inner workings of an office; men the nation over can “Michael Scott” their way through work every single day and get only grudging sighs in response to their clear lack of interpersonal skills. The same people who excuse this behavior, however, will declaim women who dare to speak up and, you know, do their jobs by insisting that they are a bad “cultural fit.” This is the term you use to fire a woman for no reason or for not fitting your bizzaro ideal of what a working woman should be. Frankly, if you’re going to insist a woman doesn’t fit your office environment’s “culture,” you should be forced to vocalize what that culture is without using this shortcut. Chances are it’s a culture that should change.

Generally speaking, anything that equates men or the presence of testicles with effectiveness and toughness no longer has a place in the office lexicon. Recognizing that the very language we use to encourage women to speak up is loaded with gender stereotypes is the first step in admitting we’re not actually encouraging them to speak up at all. We’re in fact sending the message that they should do no such thing.

This phrase puts a positive spin on a hugely damning phenomenon — women at the office being acclaimed or complimented for their motherly or stereotypically feminine qualities instead of their work contributions. It’s always nice to be complimented, and nobody says “den mother” meaning it as an insult, but any saying that puts the focus on a woman’s domestic skills at work necessarily winds up minimizing their professional contributions in the process.

Men are, for some reason, expected to maintain a home life and a work life without it being too much of an issue. Perhaps this is because we don’t expect them to be doing any of the heavy lifting at home. Perhaps we believe they are superhuman. Perhaps we’ve been watching too much Mad Men. Whatever the reason, it’s rare that employers question men’s ability to have a life and a job. Women, meanwhile, are said to be “juggling” these two things, indicating that at every moment, either family or work responsibilities are in danger of crashing to the ground. If we’re going to live in a world in which women work, we also are going to live in a world where men and women both have family responsibilities. It’s time to talk like we know this.

Denial is one of the ways people handle their guilt about unknowingly (or knowingly) enjoying and contributing to sexism in the media. As such, it’s common to have your frustration with the myriad ways in which women are objectified and commodified met with total confusion and denial by your male coworkers. In these situations, some men seem to have difficulty with the idea a person can can “react” without meeting the technical definition for “overreacting.” Expressing exasperation when you realize that 30 percent of the TV show Friends is jokes that are actually kind of misogynistic doesn’t discredit Friends as a funny television experience. It doesn’t mean Friends directly impacted public policy. All it means is that you understand that sexist media creates a sexist culture and that’s kind of a bummer.

This word is often appropriate when used in the non-imperative sense. Sometimes everybody does need to relax a little. Spas are nice, right? Then there are the times when it’s employed as code for "you’re being emotional." The idea that men react when it’s justified and women react when their hormones tell them to is deeply ingrained in our culture. By extension, the idea that women's are reactions are ultimately baseless is also deeply ingrained in our culture. What is seemingly not ingrained in our culture is the knowledge that both sexes have hormones and emotions. If we live in a world in which estrogen is making women sensitive and prone to crying, then we also live in a world in which testosterone is making men unnecessarily pugnacious and short-sighted. But here’s the thing, if we live in that world, it’s men that are actually making it a worse place. Maybe they should “relax.” The problem is, nobody ever tells them to.

At work, you are literally being paid to have an opinion about your work. Maybe that opinion is, “I should do the menial task assigned to me.” Maybe that opinion is, “we aren’t doing this right.” Maybe that opinion is, “this isn’t worth my time.” Whatever it is, having thoughts at work isn’t some sort of evil concept created by ornery women — it’s a thing all humans do when they have brains. When men have opinions they are often celebrated for taking initiative and making things happen. It seems that women are more likely to just be called “opinionated,” as if their thoughts are an unwelcome imposition on everybody who cares about getting the job done. My opinion is that this is a hugely unbalanced and annoying phenomenon.

This is actually code for: “Let me explain this is your tiny lady-brain understands what I mean.” Confused? Let me explain! If there is one thing we’ve realized now that there's a word to describe it, it’s that a lot of men unknowingly “mansplain.” It's not surprising, they are trained from an early age to value their own conversational contributions over those of women and not trained to think about what they sound like while mid-mansplanation (can we make that word happen?!). The thing is, once you are explaining something, it’s clear that you’re explaining something. Explaining that you are explaining something doesn’t make your point clearer unless your point is that you are condescending and a little rude. Next time, just say what you need to say, even if you’re saying it to a woman.

Add these to the list of words that, by implication, describe women who dare to speak up about their thoughts. Plenty of ink has been devoted to the fact that both of these words give a negative connotation to the very qualities that men get lauded for, things like being “direct” and “effective.” It’s time for women to get celebrated for trying too, and one of the ways we can make that happen is to change the language we use to describe their efforts. If we called women “effective,” they’d have an easier time being effective because we’d consider their efforts worthy. When we call them abrasive, we make it easier to shut them down before they’ve even had a chance to do anything.

This old chestnut is a cousin to “emotional” and “bitchy.” It not only serves to discredit your resident female thought-haver for making legitimate complaints or expressing realistic concerns, but it has the added benefit of implying that they are too young to have anything worthwhile on their minds anyway. It’s especially insidious for smaller women, who often get pushed aside for just seeming “young” (and by extension and “inexperienced”) even if they’re fully grown experts in the field. (Short people, in fact, literally earn less money than tall people.) Unless you are 100 percent sure you are talking to a teenager, it’s worth thinking through how this comment will be received.