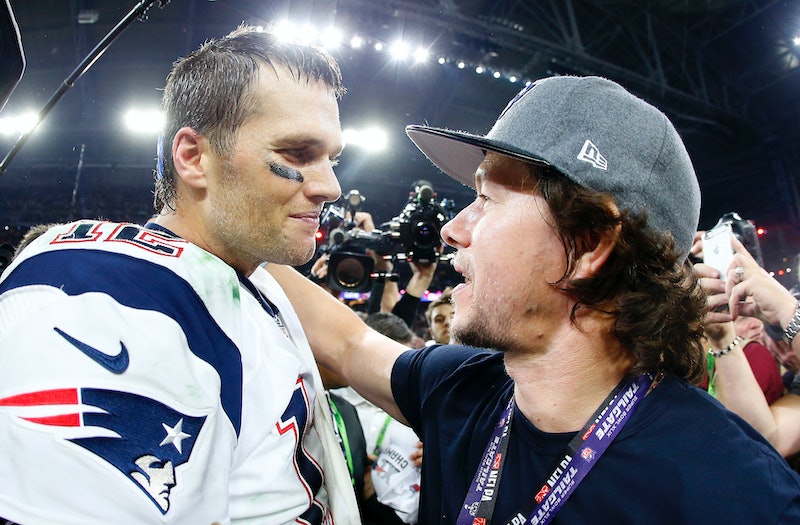 While Seth MacFarlane's original film, Ted, dealt primarily with the lighthearted relationship between man and bear, the movie's sequel delves into some significantly deeper territory. In Ted 2 , Ted and his new wife want to have a baby, but there's one problem: Ted is, well, a teddy bear. He doesn't have the appropriate equipment to facilitate a pregnancy with his wife — in other words, he is short one pretty important appendage. With that in mind, he and his best bud, John (Mark Wahlberg) come up with a plan to procure some sperm... and we're not just talking about your regular, everyday man sperm. Ted wants the best sperm that the world has to offer, sperm that will produce the best baby on the face of the Earth — and that is produced by Tom Brady, the quarterback of Super Bowl Champions New England Patriots and the dad of two kids himself, with supermodel Gisele Bundchen.

As you'd expect, the process doesn't go so well, although what happens is less surprising than the very fact that Brady appears in the movie. Seeing the football star in such a raunchy film like Ted 2 is unexpected, to say the least, as he's not exactly known for his acting. If he did delve into movie making, you might expect his big-screen debut to be in an action movie with explosions, guns and sweat. Still, considering that he and Mark Wahlberg are real-life buds, his appearance in the comedy sequel does make some sense. It only seems fitting that diehard Bostonians Wahlberg and Brady share a strong bond — and believe us, it's a strong one. Check out the big "sperm heist" scene here that probably brought the duo even closer together:

According to Ted 2's lead actor, It didn't take a lot of convincing to get Tom Brady into the movie. In an interview on The Today Show, Wahlberg told Matt Lauer, "We've been friends for a long time. He came to visit me on the set of Ted 1 ." Apparently, the athlete seemed to enjoy his time enough on set of the first film that he came back for the second (at which time he, like any normal person would, snapped a pic and posted it on Facebook.

In an interview on the Dan Patrick Show, Wahlberg made his feelings towards Brady even clearer, calling the athlete "a great American hero” and "a cultural icon." High praise, but apparently, totally earned —in an interview with ESPN, Wahlberg said that Brady did a great job in his Ted 2 scene and was "really funny." True, it's kind of hard not to be funny in a scene where Marky Mark and a teddy bear voiced by Seth MacFarlane are trying to steal your sperm in the middle of the night — but still, it shows that the duo truly do have a good bond on set and off.

Now, the only question is: will Tom Brady appear in Ted 3, if a sequel does happen? It seems like real-life Brady would probably jump at the chance, but movie Brady, who got woken up by... that? We can certainly hope, but judging from the shenanigans of Ted 2, I wouldn't bet on a re-appearance any time soon.

More like this
'The Holiday' Sequel Is Reportedly In The Works
By Sam Ramsden
Lindsay Lohan Just Recalled A Hilarious 'Parent Trap' Story
By Sam Ramsden
Then Vs. Now Photos Of The 'Enchanted' Cast In 2007 & The Sequel's Stars In 2022
By Marina Watts
These ‘Love Actually’ Plotlines Are “Out Of Date,” According To Director Richard Curtis
By Grace Wehniainen
Get Even More From Bustle — Sign Up For The Newsletter